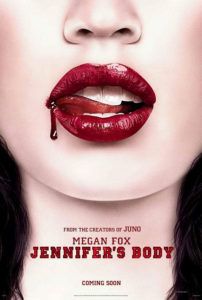 For a horror-comedy, Jennifer’s Body is conspicuously unfunny and unscary. Megan Fox plays ultra-cool high school cheerleader Jennifer, who becomes a literal man-eater after she’s possessed by a demon. Jennifer’s nerdy best friend, eye-rollingly named Needy (Amanda Seyfried), discovers her killing spree of teenage boys and tries to stop her. Somewhere in there exists a message about how there are too few strong female characters in horror movies—audiences should expect nothing less from Girlfight director Karyn Kusama—but by flaunting the “hottie” status of its star, and relying on her as its primary marketing tool, this film trumps its own intent.

Screenwriter Diablo Cody tries hard to be edgy and smart here, using leftover lines of teenspeak from her Oscar-winning script for Juno to fill out the dialogue. Cody delves into sophomoric territory to compose a script so wrought with clichés and desperation to be cool that it’s embarrassing. Cody was no doubt aware of the story’s clichés as she wrote them, rendering them almost satirical, but her attempts to turn them cleverly ironic with her particular brand of punchy, witty writing fail. Her story begins when Satanist wannabe rockers, led by an eye-liner heavy Adam Body, visit the small town of Devil’s Kettle to sacrifice a virgin and assure their band’s success. They make the wrong choice thinking that Jennifer is virginal; indeed, her easy virtue has botched the occult ceremony. Now she’s hungry for boy-flesh. Usual for teen horror fare, the body count rises as Fox’s in-crowd queen picks out victim after victim. Meanwhile, Seyfried has enough acting chops to keep her character’s discovery and subsequent resolution of the situation bearable.

The difference between this and every other teen gorefest is that the usual gender roles are reversed. Typical female horror movie damsels are inverted into horny male victims, while the standard hero changes from a male protector into a timid girly-geek. But if Cody and Kusama truly hoped to empower women through these alterations to horror formula, they should’ve started by choosing an actress who hasn’t been objectified by her sex symbol status. Fox, in her first leading performance after garnish roles in the two Transformers movies, will probably draw more male viewers hungry for eye-candy than young women in need of empowerment. No matter how many boys the character devours in her statement of femininity, that Megan Fox plays Jennifer makes the character a sex object to the movie’s advertisers, and more people will see the trailer than will see the movie.

The film tries to identify with popish crowds by including a heavy metal-laden soundtrack and Cody’s standard candid discussions about awkward teenage sex. But the problem is, her recycled lingo feels artificial. More so because of her post-Juno overexposure. Her intentionally kitschy tone is synthetic, and her writing seems to want the audience to acknowledge how smart and hip she is. Whereas other writers’ personal touches simply exist, Cody’s caustic signatures feel redundant and forced. It’s like she’s trying to repeat her previous success by overcompensating and giving audiences what they now expect from her, and the result is disingenuous. In her rush to prove herself after Juno, she only proved that she’s not very versatile.

Cody’s script wants desperately to achieve cult-classicism, except that that phenomenon usually comes from the unlikeliest of places and only when unexpected, hence the cult status. Whenever something falsely morbid like Repo! The Genetic Opera comes along and insists upon appealing to Cody’s sought-for demographic, the alt-cult audience, too smart to be so easily duped, rejects the product. Undoubtedly that will be their reaction to Jennifer’s Body, a disappointment for Cody’s fans and proof that her too-cool-for-school writer persona has limits to its charm.