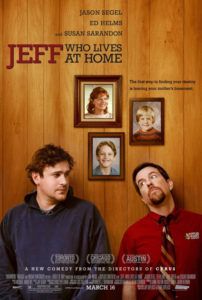 Jeff, played with absolute sincerity by Jason Segel, is an unemployed 30-year-old living in his mother’s basement. We first meet Jeff in a tight shot of him taping his thoughts about the 2002 film Signs on a voice recorder. He goes on about how everything in the film is interconnected, how subtle details at first have no meaning, but then they come together in the end. The shot pulls back to reveal Jeff is sitting on the toilet. And so, it’s easy to undercut Jeff’s devoted belief that all things are connected, as they are in M. Night Shyamalan’s 2002 film, because on the outside he’s eccentric and almost certainly a loser. He smokes pot all day, eats Pop Tarts for dinner, and clearly doesn’t have his life together. This makes it easy to discount his faith that coincidences are never just coincidences.

Jay and Mark Duplass, the writing-directing brothers behind the experimental, quasi-improvisational horror-comedy Baghead, take another step toward mainstream Hollywood comedies with Jeff Who Lives at Home. The result is decidedly similar to their last film, Cyrus, which starred Jonah Hill as an obsessive grownup-child who lives with his mother. Their intention here is not darkly comic, though; by and large sweet and soon enough whimsically sentimental, the film is an amusing dramedy with heart. There’s an indie feel to the production, shot with considerable grain on location in Baton Rouge, Louisiana. Cinematographer Jas Shelton’s handheld HD camerawork employs annoying little quick zooms that remove us from the moment. But aside from this stylistic quibble, the film has plenty of charm thanks to the cast.

Segel, who looks like an overgrown adolescent, was perfectly cast. His sheer size leaves him towering over his fellow castmembers. Comparably small and skinny, Ed Helms plays Jeff’s brother, Pat, a paint salesman who’s stuck in a dead, passive-aggressive marriage with his wife, Linda (Judy Greer). Then Pat goes and buys a Porsche without her approval and that’s the last straw. Pat, a crude salesman-type who conducts pseudo-business lunches at Hooters, thinks his brother is a loser too. Even their widowed mother, Sharon (Susan Sarandon), thinks Jeff is a loser. And watching Jeff frump around throughout the entire film in a hoodie, jogging shorts, and greasy, windblown hair, we’re apt to think the same. The story’s momentum takes off when Sharon assigns Jeff a sole task for her birthday: buy some wood glue from Home Depot to fix a broken shutter on the cupboard door. She even leaves him a $5 bill to complete the task.

But when Jeff receives a wrong-number call from someone looking for “Kevin”, he begins to follow signs of anyone named Kevin, hoping that there’s some hidden purpose behind their appearance. Sometimes it has no meaning at all, and other times, there’s a profound reason that he refuses to deny. The film’s funniest moments occur where Jeff’s confidence in these little twists of fate actually work out. There aren’t many guttural laughs in the film, but there’s a pleasantness about the story and in watching Segel lumber through scenes that one cannot dismiss. Helms is less affable, playing a company man who’s not particularly caring toward his wife. As she did in The Descendants, Greer shows she holds her own in dramatic scenes as well as comedic. Sarandon is charming in a subplot about her character finding romance from within her cubicle walls.

Jeff Who Lives at Home shouldn’t be described as existential, although it bears a conspicuous number of similarities to David O. Russell’s “existential comedy” I Heart Huckabees, which is also about a character searching for meaning in a series of coincidences. And like that film, this one plays out to a happy ending that for some might seem profound (if not a little too convenient here). Granted, the Duplass’ dialogue isn’t as brainy as Russell’s and the presentation lacks much flair outside of the post-Little Miss Sunshine realm, but these are ultimately the same story, complete with an open-minded protagonist whose arch-nemesis is a close-minded company man. Nevertheless, this is the more accessible film, and audiences are bound to fall for Segel’s teddy bear sweetness and the genial way the characters manage to work out their problems.