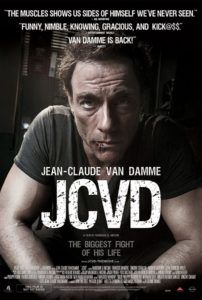 It’s doubtful that anyone expected the “Muscles from Brussels” to dish up hardcore Van Dammage again anytime soon, but he’s returned nonetheless in an unexpected marvel of impressively creative and severe proportions. The film is aptly named JCVD after its star, as the entire comedic, existentialist, self-parodying bank heist thriller centers on the troubled life of martial artist movie icon Jean-Claude Van Damme.

During an impressive tracking shot involving stuntmen and pyrotechnics galore over the opening credits, Van Damme takes down countless bad guys, snapping necks and delivering high kicks to the jaw with all the bravado and energy of a top-notch action star. Guns blast, knives stab, fists connect, urban warfare explodes, and our hero receives not one scratch per usual. Suddenly a door slams and a cheap setpiece on Van Damme’s latest low-budget actioner falls, leaving the young director of the film production to scoff, and the Muscles to complain, “It’s very difficult for me to do everything in one shot, you know? I’m 47 years old!”

Shown painfully losing his custody hearing, strapped for money, and being replaced in his latest fighter role by Steven Segal (who cut his ponytail for the part), Van Damme depicts himself with equal parts angst, melancholy, and bittersweet humor. Playing himself without a safety net to preserve his pride, the truths of the actor’s life come to the surface when Van Damme finds himself in the middle of a post office heist in Brussels. News media and police believe the star is the perpetrator, since he not only fits the description of a desperate type on the skids and frantic for cash, but the real robbers are keeping silent.

Unlike your typical Van Damme scenario, the film is not Die Hard-in-a-post-office. The slimy crooks are readily aware of who they’re holding at gunpoint, along with several other hostages, but Van Damme doesn’t play hero. He’s already defeated and weak. Tired, at one point he literally ascends into the air in a confessional of affecting proportions, admitting to all the faults of his life in sobering tears. Of course, he’s allowed to play too, teaching one of the goons how to kick a cigarette out of a hostage’s mouth—Van Damme does it flawlessly, but the goon needs practice.

Followed by the stigma of cheesy martial arts movies that ultimately became cheesy direct-to-video fare, Van Damme’s career has all but taken a nosedive into the realm of forgotten obscurity. The 1990s pop-culture action hero appeared in successes like Bloodsport, Hard Target, Timecop, and then duds like Street Fighter: The Movie and Double Team with Dennis Rodman. Things went downhill in the mid-1990s, the material became worse and worse (not that his films were ever brainy to begin with), and his personal life was wrought with a string of divorces and ensuing drug addictions.

Heavy in its dramatic satire of Van Damme’s life and career, JCVD acknowledges the illusion of moviemaking, insomuch that sometimes audiences tend to forget there are real people working therein. Cleaning himself up in recent years, Van Damme’s choice to play this version of himself in French director Mabrouk El Mechri’s humanizing ode was perhaps the best decision of his career. First it allows audiences to see that, indeed, a capable actor is at work here, one that was pigeonholed into sloppy fighter yarn. And then it presents a human-being naked of his celebrity’s arrogance and self-importance, revealing a broken man teaming with pathos and heartfelt regret. It’s a staggeringly good performance, which admittedly came unforeseen but was heartily welcome.

Don’t think of the picture as just another Jean-Claude Van Damme film, though his devoted fans finally have a release worth guiltlessly clamoring over. In every way possible, El Mechri designs a production dripping with formal style, class, and emotional merit. The film will involve viewers not only in the liveliness and realness of its caricature, but in an achingly candid dramatic portrayal that will leave you wanting more in the way a great movie should. Wholly surprising, utterly effective, with any luck JCVD will be the breakthrough Van Damme needs to allow future showcases of his apparent talent.