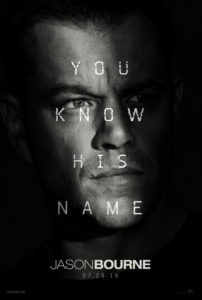 If you’re a fan of the movies based on author Robert Ludlum’s brainwashed spy character Jason Bourne, you might approach the fifth entry, entitled Jason Bourne, scratching your head. After all, in 2007’s The Bourne Ultimatum, where we last saw Matt Damon’s amnesiac super-soldier, it was revealed Jason Bourne’s real name is David Webb. But rather than change their formula or cast aside a solid name-brand, the filmmakers avoid detracting much from the established formula. That includes the title. Indeed, the series launched with 2002’s The Bourne Identity and has remained devoted to its basic structure in every Bourne movie since, arguably to a fault. Fortunately, given that almost a decade has passed since the titular protagonist last out-witted his U.S. government pursuers, the surveillance technologies involved in the usual Bourne scenario have made incredible leaps and bounds, which enhance the tension here. As a result, Jason Bourne’s audience is left with a frightening case of technophobia—almost as nasty a case as spread by Alex Gibney’s recent doc Zero Days.

The prospect of another sequel in this franchise is met with conflicted feelings. The Bourne Ultimatum (seemingly) ended the trilogy on a very satisfying note, carrying our hero through an arc that cleverly interconnected all three movies. Of course, letting a proven blockbuster franchise end has an opportunity cost few Hollywood studios can ignore. So, instead of just making more movies about Jason Bourne, Universal Studios and director Paul Greengrass have danced around the franchise since 2007. Helmer of The Bourne Supremacy (2004) and its immediate sequel, Greengrass reteamed with Damon for Green Zone (2010), an underseen Iraq War actioner about a bogus search for WMDs. And when Damon was either uninterested or unavailable to make another Bourne sequel, Universal released The Bourne Legacy (2012), a spin-off starring Jeremy Renner as another engineered character the U.S. government deemed too dangerous to live.

Now that Damon has returned for his fourth go-around as Bourne, writers Greengrass and Christopher Rouse employ the same basic blueprint as Jason Bourne’s predecessors: After he’s set on the run, Bourne evades capture through a combination of brutal hand-to-hand combat and intense driving. His escape route sends him all over the globe, from Greece to London to Las Vegas. Meanwhile, in a Top Secret surveillance room somewhere under Washington D.C., a Head Honcho orders a crew of technicians and analysts to gain control of every camera, computer, and personal device needed to track Bourne. There’s a lot of dialogue between The Powers That Be, such as, “You’re dealing with Jason Bourne here!” At the same time, someone in the highest ranks of U.S. intelligence authorizes the release of an “asset”—a steely assassin, usually played by an actor of note (in the past, this role was played by the likes of Clive Owen or Karl Urban). Here, it’s Vincent Cassel.

Are the specifics important? I suppose so. The story begins when former agency analyst Nicky Parsons (Julia Stiles) hacks into the CIA to steal Black Ops files for a hacker named Christian Dassault (Vinzenz Kiefer), a mash-up of Edward Snowden and Julian Assange. Dassault wants to unveil the CIA’s shady dealings by exposing their secrets to the world—among them Treadstone and Black Briar, two elite assassin programs connected to Bourne. At the CIA, young up-and-comer Heather Lee (Alicia Vikander, underused) begins tracking Parsons, who plans to meet with Bourne to warn him about exposure, and reveal more secrets to his past, specifically involving Bourne’s father (Gregg Henry). Overseeing Lee’s operation is CIA Director Robert Dewey (Tommy Lee Jones), a carryover from the old intelligence community who still believes a bullet to the head is the best solution. Lee’s approach represents her modern, cyber-minded perspective. Eventually, we just know Dewey and Lee with butt heads, especially concerning how to handle Bourne.

The plot thickens when social media mogul Aaron Kalloor (Riz Ahmed, very good), whom Dewey wants to use to gather intelligence on the one-billion users of Kalloor’s platform, backs out of his deal with the CIA. Dewey plans to use his “asset” to rid himself of both Lee and Kalloor at an intelligence conference in Las Vegas. Bourne isn’t going to let that happen, not if it means getting answers from Dewey about his past. Although the motivations aren’t always crystal clear or given enough screentime to breathe, Greengrass’ orchestration of frenzied action remains intact. Editor Christopher Rouse cuts in short jolts of violence, while cinematographer Barry Ackroyd’s ever-shaky frame makes it difficult to read a plot-important text when characters hold up their smartphones. Greengrass’ verité visual presentation has always seemed strangely out of place in the Jason Bourne movies, and instead more appropriate for real-world titles like Captain Phillips (2013) or United 93 (2006). Nevertheless, Greengrass assembles a brilliantly overblown chase in downtown Las Vegas that challenges any action sequence in the entire series.

Although we learn nearly everything there is to know about our hero by the end of Jason Bourne, the character’s growth seems minimal, as this series has always been more interested in developing impressive action and stunts over allowing its hero ample screentime to process his otherwise considerable emotional baggage. By now, it’s a problem with the series that comes as no surprise, even though this movie has stronger ties to Bourne’s personal history than previous sequels. Jason Bourne delivers everything you would expect from a Bourne sequel, no more, no less. In a way, that’s a good thing. It’s a dependable series. And while this entry recycles the typical formula once again, it offers just as much closure and possibilities for a sequel as The Bourne Ultimatum. Some viewers may see through the repetitive story structure and find themselves tired of seeing the same thing over and over; but we’ve been seeing the same basic outline play out over the last four entries in the franchise. If you haven’t grown tired of it yet, you probably won’t start now. And moreover, when it’s made with the level of energy that Greengrass applies, it’s difficult not to be entertained.