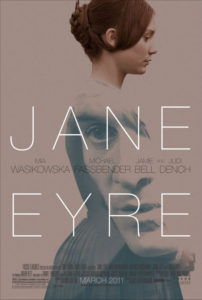 Every few years, along with countless Shakespeare plays and Jane Austen romances, another adaptation of Charlotte Brontë’s Jane Eyre makes its way to the screen. Some are forgettable, others have their merits, and a few become classics in their own right. Each new adaptation has its own objective, whether to reinvent or modernize or remain faithful to the source material. Cary Joji Fukunaga’s version stands among the best, certainly challenging the 1943 version with Joan Fontaine and Orson Welles, and besting the most recent film adaptation from 1996 by Franco Zeffirelli. With the haunting tone of a romantic mystery and an elusiveness that does its eponymous character justice, this is one of the best looking, best acted, and most involving adaptations of Brontë’s novel to date.

Screenwriter Moira Buffini (Tamara Drewe) condenses the novel with a transformed perspective, establishing the protagonist as an outsider and concentrating primarily on the romance between Jane (Mia Wasikowska) and Mr. Rochester (Michael Fassbender) at Thornfield Hall. So many allusions to Jane’s religious convictions have been removed to impart her status as a free-thinking woman in a time where such a thing was rare. Bookend scenes with St. John Rivers (Jamie Bell) and his sisters, who adopt Jane into their small family later in Jane’s story, work to deepen the notion that Jane does not fall into the conventions of the period merely because it is custom. Flashbacks to Jane’s past, such as her experiences at Gateshead Hall with her pitiless aunt (Sally Hawkins) or education at Lowood Charity School, are brief enough to evoke a sense of isolation in Jane. Keeping a distance but with palpable sexual and social tension between them, Jane and Rochester guide the story.

From the delayed appearance of Rochester in his own manor to his elusive flirtations with Jane, his newly hired governess, there’s no certainty to their developing interactions, and that’s what makes them so spellbinding. In their first meetings, she challenges his masculine and unquestionable authority; instead of being taken aback by her resistance to decorum, it fascinates him. In time, as their hinting romance grows, Rochester makes vague allusions to things Jane must never ask about, although he remains mesmerized by her, yet still full of dark secrets. From Jane’s perspective, he is both a romantic ideal and a mystery. And Fukunaga plays on the puzzling aspects, enhancing the gothic tone of the story with a few jolts, a persistent dark presentation, and even ghostlike uses of sound to infect the audience with Jane’s initial sense of trepidation and subsequent ardor for Rochester. It’s a frightening atmosphere that equates Jane’s passion to the haunting of a ghost.

These elements are perfectly balanced by Wasikowska and Fassbender’s performances. With an underwhelming appearance in Alice in Wonderland, Wasikowska made a surprising turn in The Kids are All Right, and here proves her talent again, rendering her Jane with meekness yet strength of character. But it’s Fassbender whose undeniable draw and harsh energy command the screen, making Rochester feel at once dangerous and charming. After smart indie films like Fish Tank and Hunger, Fassbender’s career has been poised for something special, as this actor, certainly one of the best working today, has made Inglourious Basterds with Quentin Tarantino, and has films coming in the next year with Steven Soderbergh, David Cronenberg, and Ridley Scott. His agent deserves applause. In their periphery roles, the always welcome Judi Dench and the underused Jamie Bell also give strong performances.

Fukunaga’s engrossing approach involves the viewer not only in the romance narrative, but in the cinematic flourishes cleverly employed to make the viewer surrender to the experience. In so many adaptations of classic literature, the recessive mise-en-scène feels dry and has no presence within the story, whereas Fukunaga and cinematographer Adriano Goldman have labored over dimly lit hallways, limited light sources, brooding atmosphere, and creepy sound design. Their approach borders on supernatural horror, and will appeal to modern fans of both the classics and more stylized modern ghost stories. The audience feels transported into the world of Jane Eyre; whereas so many adaptations seem content with just another standardized retelling, Fukunaga’s film dares to be something unique.