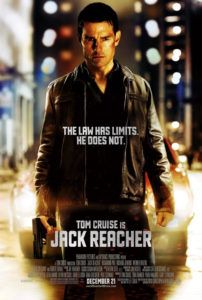 All of those undeniable charismatic qualities that made Tom Cruise pitch-perfect as Ethan Hunt in the slick Mission: Impossible franchise work against him in Jack Reacher, an adaptation of Lee Child’s gritty book One Shot. Much in the vein of this year’s Alex Cross, the film brings a popular crime fiction badass to the screen, and the result is an uneven and cliché-ridden mystery-thriller. Christopher McQuarrie, writer of The Usual Suspects and Valkyrie, directs for the first time and has occasional moments of inspiration, namely a number of carefully assembled fight sequences, shootouts, and one impressive car chase shot with clarity by cinematographer Caleb Deschanel. But the talky script rife with exposition chatters on for too long, while McQuarrie explores some odd tonal inconsistencies throughout, making us wish Cruise had spent the last year filming a sequel to 2011’s fantastic Mission: Impossible – Ghost Protocol instead.

Reminiscent of 1970s tough-guy roles not unlike those in Dirty Harry or Death Wish, Jack Reacher is described in Child’s series of books as deliberate and hard-nosed, a six-and-a-half-foot drifter and former military investigator who now lives off the grid—a far more imposing disposition than Cruise’s sly magnetism is capable of. When the film opens with a seemingly anonymous public shooting in which five bystanders die by the bullets of an ex-military sniper, Cruise’s titular character hops on a bus to investigate, having known the prime suspect, Army vet James Barr (Joseph Sikora). Arriving only to ensure Barr will receive his due punishment, Reacher is convinced by Barr’s lawyer Helen (Rosamund Pike) to stick around and investigate further. When he does, he discovers a set-up involving a criminal conspiracy.

Peripheral characters include Helen’s father, the skeptical District Attorney (Richard Jenkins), and the lead investigator in Barr’s case, Det. Emerson (David Oyelowo). Behind the conspiracy is Werner Herzog’s creepy if underdeveloped character “The Zek,” a man whose life’s mission is survival at any cost. Along the way, Reacher pokes his nose where it doesn’t belong, and the bad guys react by sending goons to stop him. In response, Reacher doles out curt beatings and verbal jabs to remind us he’s a badass, but Cruise never disappears into the rugged role. It doesn’t help that the central mystery of Jack Reacher isn’t that involving. Attempts at twists and turns fall flat when we’ve already predicted them or they’re altogether unclear. The incentive for the shooting’s contrived frame-up isn’t very interesting, nor are Reacher’s motivations to stay involved. And at around 130 minutes, the movie takes far too long to outline everything before the final actionized resolution.

Many of the film’s downfalls reside in McQuarrie’s tonal irregularity through bouts of comic relief and romantic teases. There’s a slapstick fight in a bathroom where two thugs bonk each other over and over while trying to get at Reacher. Another scene in Reacher’s hotel room finds Cruise shirtless in front of Helen; there appears to be some sexual tension here, but nothing comes of it. Reacher remains intent on stopping the antagonists and moving on, nothing more. The kind of singular badass movie McQuarrie wants to make feels undone by the PG-13 rating, which by definition cannot keep promises made in the dialogue. At one point, talking to the real sniper, Cruise spouts, “You killed that girl to put me in a frame, and I mean to beat you to death and drink your blood from a boot.” Nothing so drastic will happen within McQuarrie’s rather soft-boiled thriller.

Cruise, serving in a producer capacity as well, clearly wants to establish yet another franchise at Paramount Pictures besides Mission: Impossible. It’s doubtful that there will be a sequel to Jack Reacher, though. Child’s ongoing book series might have seemed appealing on the page, but as a film, there’s too little to hold the material together. We’ve seen all of this before with far better results, and far better casting. Other characters keep telling us how mysterious and dangerous Jack Reacher is, and yet Cruise’s appearance, clean-cut and trim, doesn’t fit the bill, while the routine supporting cast (except for Herzog) doesn’t help elevate the material, even with Robert Duvall’s appearance toward the finale. This is very standard stuff presented in an articulate manner, but neither McQuarrie nor Cruise transcended the paperback material into something worthy of a Hollywood motion picture featuring an A-list star.