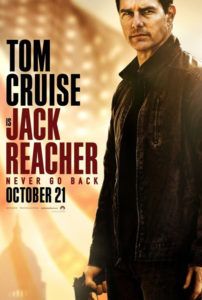 Jack Reacher: Never Go Back comes four years after its modestly profitable but quite forgettable 2012 predecessor Jack Reacher. As producer and star, Tom Cruise brings us a sequel few could claim to be excited about. Indeed, Cruise’s passion for author Lee Child’s ongoing book series seems to be the sole reason Paramount Pictures keeps distributing these films. As long as Cruise keeps agreeing to appear in the ever-entertaining Mission: Impossible series of blockbusters, the studio seems willing to drop negligible budgetary dollars on a lesser franchise to keep their star happy. Much like the first entry, Never Go Back results in a generic, mildly servicable kind of movie that will satisfy fans of the books, even as they complain that Cruise was miscast as the lead character, a former military investigator turned drifter.

Directed by Edward Zwick, the sequel contains several opportunities for Cruise to act like a tough guy; an underdeveloped romance; an overdeveloped latent fatherhood subplot; a familiar conspiracy-laden story about corrupt military officials; and a seemingly invulnerable hero, who demands even those closest to him call him “Reacher”. Cruise’s charismatic presence tries to make up for what the script lacks (such as a pulse), but the storytelling proves so predictable and bland that it’s difficult to care about anything that’s happening. This is a familiar feeling, given that I’ve seen Jack Reacher twice and, after both viewings, my memory banks immediately deemed all information pertaining to the experience was unnecessary and dumped it.

Because my job as a film critic requires that I write a plot description, here goes: When his friend Major Turner (Cobie Smulders) faces charges of espionage, Reacher believes her arrest resulted from a conspiracy between the U.S. military and private defense contractors. He’s proved correct when he, too, finds himself framed and in jail, soon leading to an escape. Now on the run as fugitives, Reacher and Turner must investigate an elaborate cover-up while also trying to survive an onslaught of mercenaries. Meanwhile, an MP official (Aldis Hodge) occupies a familiar Bourne movie trope by shouting at his pit crew of surveillance techies, “I want everything on Reacher, and I want it yesterday people!” On the periphery, Reacher also discovers he may have a 15-year-old daughter, Samantha (Danika Yarosh). Of course, the baddies, headed by an evil-for-evil’s-sake merc (Patrick Heusinger), plan to use Samantha as leverage to get at Reacher and Turner.

An unpolished quality hampers Never Go Back, which is surprising since Zwick and Cruise previously collaborated on the slick-looking, if culturally questionable The Last Samurai (which famously features an American as the final Japanese warrior). Some of the shootouts and the finale’s rooftop sequence look cheap, as reportedly most of the budget went to its high-dollar star. Or consider the dialogue, penned by Marshall Herskovitz, Richard Wenk, and Zwick. At several points throughout this movie, the viewer must try to decipher what the characters meant to say: While on the run, Turner tells Reacher, “We need to ditch the car and get into my email!” Wait, so they can hide inside an email? And then there’s the sappy dialogue between Reacher and Sam, which seems determined to reveal the writers’ complete lack of understanding for how teenagers communicate.

As a character, Jack Reacher remains a B-movie composite of James Bond and Caine from Kung Fu, a cold-hearted badass who this movie tries to soften with a child and a would-be romance. Not only does Cruise not fit the character, but the movie refuses to embrace its own cheesiness and allow Reacher to be the tough, indestructible hero he’s supposed to be. This says nothing of this sequel’s random moments of what I’m calling “Reacher vision”, where the character sees black-and-white projections of what happened at a crime scene—sequences straight out of a poor man’s Minority Report, except without the precogs. Technically and narratively uneven, Never Go Back remains exclusively suited for those with a particular interest in this intellectual property, especially given the low-rent quality of the story and production.