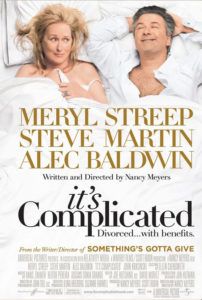 With many romantic comedies today, you have to forgive a considerable amount of formula for the result to work as intended. You have to accept that the implausible and stupid will probably occur. You forgo the details and regard the big picture, the impossibly glorious way in which it all works out, which should give you a warm feeling when it’s over. Of course, it never hurts when you’re packed in the theater, or on the couch, with an audience ready to laugh at whatever’s thrown at them. Laughter is contagious, after all. That these prerequisites for rom-com viewing exist at all represents the rather sad state of the genre today; they weren’t required in the days of Howard Hawks and Preston Sturges, a time when the rom-com was treated like a fine piece of craftsmanship.

It’s Complicated has all the aforesaid makings of a pleasant, modern romantic comedy. Ignore some incongruent details, forgive the formulas, watch with others, and voila—you have a success. Think about it too much, and you might begin to like it less; but you could say that of any movie by Nancy Meyers, this film’s writer-director. Meyers also made What Women Want, Something’s Gotta Give, and The Holiday, so there’s experience there with varying results. She has a very specific audience that she’s writing for here (if the audience in my screening is any indication), namely middle-aged women, and that audience will love this movie. Indeed, the right demographic giggles at the very concept. But there’s also the much wider appeal of the actors involved, so admittedly, this critic was giggling too.

The story concerns a divorcée, Jane (Meryl Streep), whose ex-husband, Jake (Alec Baldwin), decides after ten years that his much younger wife, Agness (Lake Bell), doesn’t have what he needs. What he needs is “home,” which is how he describes Jane after the divorcees hop into bed after some drunken peace-making. Jane, who has spent years trying to get over Jake, doesn’t know how to feel about what happened. She tells her group of female friends—a clan that actually sits around drinking wine and talking about vaginas (Could there have been a bigger cliché?)—about her affair with her ex-husband, and they think it’s wonderful that Jane is truly alive for the first time in years. She keeps it secret from her three grown, loving children, however, all except her son-in-law Harley (John Krasinski), who accidentally finds out but promises not to tell.

Meanwhile, there’s the issue of Jane’s Santa Barbara home, which looks like a Martha Stewart-esque palace overlooking the Pacific. She makes a lot of money, apparently, on her restaurateur-baker salary, enough to create this extravagant country house (aka mansion) that dwarfs the homes of most millionaires in size and tasteful interior decoration. Inside, though the furnishings outshine most classy catalogues, and her immaculate kitchen is better equipped than those of most Iron Chefs, according to Jane it needs an addition. She hires nice guy architect Adam (Steve Martin) to build her an even bigger kitchen and make her house even more impressive. When she and Adam start to get familiar, Jake gets jealous and the antics begin.

Explaining the plot of a romantic comedy like this one is one of the worst things someone can do, because upon recalling every detail, its charm dwindles away. If the movie did its job, the average viewer won’t remember inconsequential details about Jane’s house, however ridiculous. They’ll instead recall the irresistible charm of the actors. My guess is the average viewer won’t notice those things, and they’ll fall in love with Streep, as they’ve probably done again and again over the years. She has that effect, doesn’t she? Streep can play just about anything, so she turns such an uncomplicated role into a pleasant, even diverse one. Alongside her, Baldwin proves himself a comedian once more, bringing his confident charm from TV’s 30 Rock. And though Martin’s character is bland as can be, he fills the role nicely.

This is a romantic comedy about mature people doing some very juvenile things (from smoking pot to sneaking around), but somehow it works. It’s very standard stuff. The characters are likable. There’s certainly no suitor we’re rooting for more than the other. Jane feels real, even in her obscenely over-designed house, whereas another actress other than Streep could’ve made her an incredible pill. It’s Complicated has an effortless appeal, giving you exactly what you want in a form that wouldn’t work without its stars. We forgive the omnipresent clichés and absurdities because Streep, Baldwin, and Martin are so good. And it’s because of their class that we don’t have to feel guilty for enjoying the result.