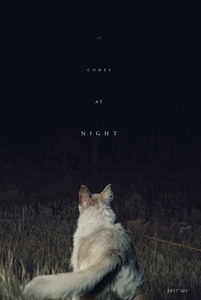 In It Comes at Night, a print of Pieter Bruegel the Elder’s oil panel The Triumph of Death, painted in 1562, hangs on the wall inside the film’s secluded, forest house. The Boschian landscape depicts skeletal personifications of death overtaking the church, slaying knights and peasants alike, and ushering crowds to their demise into an oversized coffin. Meanwhile, in the bottom right-hand corner of the painting, a lone couple has avoided the fray; even so, a nearby skeleton plays a hurdy-gurdy tune, signaling their hopeless attempt to avoid their inevitable fate. Bruegel offers a commentary that no one escapes death, and yet it remains the most fearsome notion to almost everyone. Whether death comes by accident, force, execution, betrayal, or plague, death is the fate of every living thing and remains at the root of all fear. Death lingers behind and underneath whatever terrifies us; it is the ultimate consequence. And despite death’s certitude, human beings will do horrible things to quell their fear of it.

Bruegel’s grim painting appears in contrast to a brief, blink-and-you’ll-miss-it glimpse of another work by the Northern Renaissance painter, The Hunters in the Snow from 1565. The painting shows three hunters returning home with their pack of dogs after a successful hunt, and by association, it suggests the ideal life of solitude and oneness with Nature that Paul (Joel Edgerton) and Sarah (Carmen Ejogo) hope to achieve. But much like the painting, Paul and Sarah’s idyllic getaway cannot exist due to factors in the world around them. Along with their 17-year-old son Travis (Kelvin Harrison Jr.) and his dog, the couple lives in a rather elaborate boarded-up house in the woods, avoiding all human contact in a plague-ridden, post-apocalyptic world. They have strict rules that maintain their family’s survival, such as the red door that represents the only entrance into or exit from the house, and which remains locked at all times. They never go out at night. And all strangers are treated as hostiles, approached at gunpoint, and confronted with rubber gloves and gas masks. Nevertheless, in the first scene, their system has failed them as Travis’ grandfather (David Pendleton), covered in boils and blood leaking from his orifices, wheezes a death rattle. Paul coldly resolves to put the man out of his misery and set the corpse ablaze to prevent the infection from spreading.

Writer-director Trey Edward Shults’ second feature, It Comes at Night announces the filmmaker’s talent as an expert creator of mood, but also as a sly borrower. His 2015 debut Krisha played out like a delirious family disaster set to Brian McOmber’s kaleidoscopic music that, along with the virtuoso Steadicam and abrupt cutting, felt like Paul Thomas Anderson’s Punch Drunk Love from the perspective of an alcoholic manic depressive. Similarly, Anderson’s influence is felt here, as Shults draws from There Will Be Blood‘s color palatte, intentionally paced presentation, and impressively composed shots. Shults’ cinematographer Drew Daniels shoots using natural light sources, and everything appears lit by electric lanterns or flashlights (which, thankfully, are always well-powered thanks to solar chargers). The camera moves slow, dissolving in and out of scenes in which characters speak in quiet voices. Though stylized with compositions that recall everything from The Night of the Hunter in an evocative attic scene to the extended takes in The Shining, an intense and quiet tone prevails, allowing the louder, more shocking moments to disrupt the aural calm. Shults’ style may be self-conscious and ultimately derivative, but it’s effectively applied to deliver a particularly unnerving take on a doomsday prepper’s worst nightmare (or greatest fantasy). 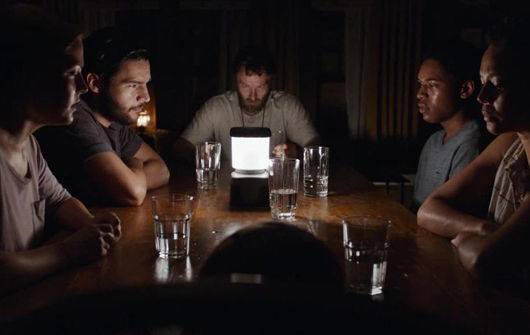 Of course, Paul, Sarah, and Travis cannot survive isolated in their sanctum forever. One night, Will (Christopher Abbott) breaks into the house and tries to enter through the red door, assuming the house is abandoned (or so he claims). Paul captures him, ties him up, and questions him, learning that Will’s wife Kim (Riley Keough) and toddler Andrew (Griffin Robert Faulkner) live nearby and need water. Because Will’s family has goats and chickens to offer, Paul invites them to live in their house—albeit after three days of waiting to determine if they are sick. Soon the new members of the household settle into a routine under Paul and Sarah’s strict rules, while they all get to know each other better. Much of the film comes from Travis’ restless perspective. Spending his formative years alone in a house with his parents has left him in a repressed state, and the sudden appearance of an attractive young woman such as Kim ignites his teenage hormones, which manifest in disturbing nightmares that combine his sexual yearning with his fear of catching the plague.

Travis’ behavior, along with the sudden disappearance of his dog, sets off a series of events that bring the situation to a bleak conflict. Shults wants his audience to consider how far we would go to protect our loved ones, but at the same time, he examines when that extreme love and protection becomes almost inhuman. Paul may seem like a well-intentioned father trying to defend his wife and child from the horrors of the world, but his mistakes are many, almost immediate in the film, and imply his behavior could result from an almost desperate fear to protect his family, rather than the actions of a knowledgeable survivalist. Consider again the early scene where Paul burns his father-in-law’s body to prevent the spread of disease; he doesn’t think about the smoke that could attract strangers to his family’s location, perhaps leading to the arrival of Will. When Paul questions Will about how he found their house, he overlooks some very obvious holes in Will’s story. Whether Will’s arrival was coincidence or something more sinister remains intentionally ambiguous, while the viewer’s paranoia and fear align with Paul’s frantic state, at least for a while.

Viewers unaccustomed to confronting and unresolved moral dilemmas may recoil from It Comes at Night; even the title proves as elusive as the film itself. To what exactly does the title’s “it” refer? There are no aliens or zombies in the film, no unspeakable creatures linger in the shadows, and no creepy-faced clown tries to lure children to their deaths. “It” is fear itself, that unspeakable, indefinable thing that calls the darkness its home. It festers in the characters’ imaginations and dreams, perhaps justifiably so, perhaps not. It’s also the driving force of the spare and economic narrative, and watching the film’s characters give into its power is unsettling. It Comes at Night occupies a familiar station, being 2017’s artfully made yet accessible horror film, like It Follows in 2015 or last year’s The Witch before it. The film’s description requires references to a lot of other films, more than I have mentioned in this review (Danny Boyle’s Shallow Grave, John Hillcoat’s The Road, and John Carpenter’s The Thing also come to mind). And it feels vital in a way that reinvigorates old techniques with a sense of dread and emotion-fueled trepidation.