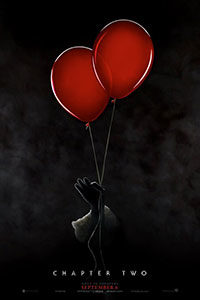 Size isn’t everything. For nearly three hours, the epic-sized sequel It: Chapter Two attempts to mirror the length and girth of Stephen King’s massive 1986 novel of 1,138 pages, one of the author’s longest and most memorable works. After the incredible financial success of the first big-screen adaptation of It from 2017, which earned over $300 million in domestic receipts and even more at the international box-office, the sequel attempts to instill its own landmark quality with a long runtime. But director Andy Muschietti’s unsophisticated treatment of the beloved pop-horror text fails to elevate the material to the exultant stature implied by its duration. As an author, King validated an admittedly ludicrous story—about adults grappling with horrific memories from their childhood experiences fighting an alien-clown named Pennywise—with his ability to immerse the reader in the inner psychology of his characters. Muschietti prefers to jolt his audience with cheap jump-scares, an ear-pummeling score, and gooey special FX more attuned to lowbrow schlock. At the same time, his characters, performed by an excellent cast, feel peripheral to the movie’s spooky funhouse scares. Despite the luxurious 170-minute runtime, Chapter Two feels hastily assembled, oddly brief and bloated at the same time, and beneath the text on which it was based.

Set 27 years after the events of its predecessor, Chapter Two opens with Pennywise (Bill Skarsgård) having returned from his slumber in the bowels of Derry, Maine, where the Losers Club of reject teens once assembled to stop him. The adult Mike (Isaiah Mustafa) has never left Derry and thus has never forgotten his traumatic experiences fighting the child-murdering clown. In fact, he’s spent nearly three decades at the local library, researching Derry’s storied history to uncover a way to defeat Pennywise once and for all. This is all recounted for the viewer in Mike’s banal voiceover, wrought with winking lines such as, “Sometimes they come back” (the name of a King short story). Eventually, Mike calls upon his former friends who made a blood oath as teens to reassemble in Derry should the creature ever return. Strangely enough, those who left their childhood town have forgotten what happened, meaning much of Chapter Two involves scenes that recall events from Chapter One. Then again, the sequel also entails the characters remembering new scenes from their childhood that the filmmakers couldn’t fit in the 2017 movie.

When Mike calls his friends to ask them to come home, Muschietti has fun reintroducing his audience to the adult version of the Losers Club. The stuttering former leader of their group, Bill (James McAvoy), has become a successful novelist who now toils in Hollywood under a fretting director (Peter Bogdanovich). The hypochondriacal Eddie (James Ransone) has found his calling as an insurance risk assessor, though he replaced his overprotective mother with an equally fussy wife. Likewise, Bev (Jessica Chastain) runs a successful fashion business, but she has replaced her abusive father with a marriage marked by domestic violence. The former “fatboy” Ben (Jay Ryan) has blossomed into a hunky executive. The wiseacre Richie (Bill Hader) hasn’t changed much; he turned his panache for clowning around into a stand-up career. Only Stanley (Andy Bean), the timid one of the bunch, refuses to face his childhood fear, opting instead for a razor to the wrists. 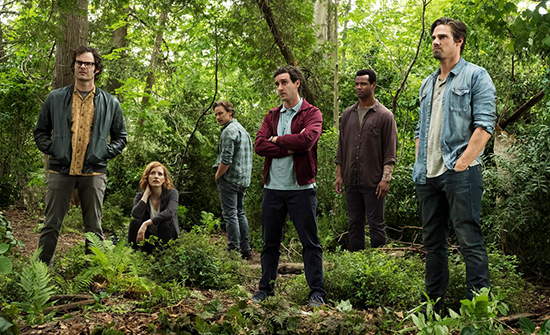 When the remaining six members of the Losers Club assemble, it takes some time before they recall Pennywise and the nightmarish events from their youths—and even then, the sudden attack by possessed fortune cookies doesn’t convince them to stay. In an underdeveloped plot point, Mike explains that a local Native American tribe battled Pennywise centuries ago, using an obscure ritual. To perform this rite, each member of the club must find a token from their childhood, requiring each of them to face a particularly troubling memory from the past—allowing the young cast of the 2017 film to reappear, albeit briefly, in a series of flashbacks. The problem with this structure is that the members of the Losers Club spend more time apart than together, even though it was the dynamic of their friendship that endeared us to them in the first place. Inevitably, they each assemble their tokens and join forces to engage Pennywise, leading to a prolonged finale that understandably diverts from the book’s metaphysical conclusion—involving a universe-vomiting space turtle and the Macroverse. Instead, Muschietti finds another reason to separate the members of the club, who must face their individual fears yet again, before finally tackling the giant clown-headed spider that Pennywise has become.

Whereas the impetus for this adaptation of King’s novel belongs to Netflix’s King-inspired nostalgia series, Stranger Things, Muschietti and screenwriter Gary Dauberman (writer of the Annabelle movies) have turned Chapter Two into a reference machine. At one point in the movie, the adult characters witness a human head roll onto the ground and sprout spider legs, prompting Richie to announce, “You gotta be fucking kidding.” The line, originated in a similar spider-head scene in John Carpenter’s The Thing (1982), has become an homage overused by genre films. At least once a year, a writer or director uses this line to wink at their horror-savvy audience, but it has since become a banal, almost obligatory comic reference point for whenever an unexpected creature appears on the screen. But then, Muschietti demonstrates his preference for the jackhammer approach to humor and homage. At first, when someone observes that Bill writes excellent horror novels apart from his mishandled endings, the amusing reference is a clear nod to a common criticism of King’s work. It might have been a funny aside, except the same joke is repeated another four times throughout the movie. Along with an unnecessary wink at The Shining (“Here’s Johnny!”), Muschietti undervalues the integrity of the material by constantly referencing other movies.

Similar to the movie’s approach to referential humor, Muschietti and his composer Benjamin Wallfisch deliver one of the most overwrought scores in recent memory. The already tetter-tottering goodwill of Chapter Two might be undone by Wallfish’s music, which asserts itself into every scene, every moment, as though the filmmakers didn’t trust the actors or the drama to convey the necessary response. There isn’t an emotion in the story that the score doesn’t over-accentuate. This is particularly true of scenes with Pennywise or other waking nightmares experienced by our heroes. Whenever an oozing leper, statue of Paul Bunyan, or back-from-the-dead bully appears on screen to scare one of the Losers Club members, the music pierces, drowning out all other diegetic sounds. And while my protests against the loudness of the score undoubtedly sound like the complaints of a grumpy old man (“It was too loud, dagnabbit!”), it was an objection I had against the 2017 movie as well. 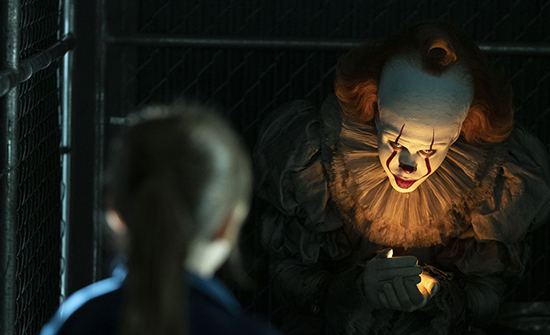 Muschietti, whose major directorial effort before the It franchise was the supernatural thriller Mama (2013), which also starred Chastain, has an affinity for over-emphasis. The typical high-pitched music in his work is only matched by his dependence on fast-moving CGI creatures, screeching their way onto the screen in a way that cannot help but cause a physical reaction. It’s the cinematic equivalent of setting off an air horn behind someone’s head—this isn’t a skill so much as a manipulation. Muschietti’s downfalls as a crafter of horror are, fortunately, offset to some degree by the strength of the material and the innately terrifying Pennywise. One of the most effective scares in Chapter Two is a superfluous moment that follows a young child under the bleachers at a local baseball game. There, she encounters the clown, who convinces her to come closer and closer until, well, you can probably guess. The moment is Chapter Two’s equivalent to the shocking and iconic death of Georgie in the sewer drain from the 2017 movie, but unfortunately, it has almost nothing to do with the rest of the story.

Such randomness is par for the course in Chapter Two, which explores everything from the terrifying nature of Pomeranian puppies to the curious placement of Juice Newton’s “Angel of the Morning.” There’s also the opening sequence, featuring a hate crime against two gay men (Xavier Dolan, Taylor Frey), which comes from the novel but feels like a satellite scene in the movie. It’s barely mentioned again, forcing the viewer to question the necessity of its placement—despite having a place in King’s book, inspired by the 1984 murder of Charlie Howard in Bangor, Maine. Perhaps the moment is intended to do nothing more than establish an anti-gay theme, which links to the closeted Richie. In that role, Hader does wonders, stealing the movie from the rest of the prestigious cast. He’s often hilarious, heartbreaking in a final revelation, and the driving force of the movie. Hader’s performance may be the sole reason to endure this scattershot experience.

Meandering about for much of its length, Chapter Two fades to white several times instead of ending, following the example of another New Line Cinema release, The Lord of the Rings: The Return of the King (2003), by delivering several scenes of closure. What’s surprising about Muschietti’s movie is how much of what occurs feels like a patchwork of scenes that are disconnected from one another and assembled into an unsatisfying whole. Parts are missing here and there, creating massive gaps in the fabric of the storytelling and character development, and making its blockbuster-sized length seem like time wasted on the wrong aspects of King’s novel. Muschietti is more concerned with exploring cheap scares than the psychological states of his characters, who have been reduced to basic versions of themselves. It’s a shallow interpretation of King’s novel, where an overlong runtime has been supplied in place of actual substance, resulting in a disappointing conclusion.