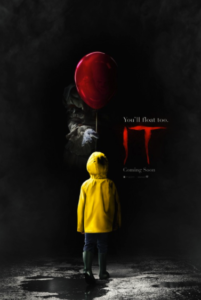 Stephen King’s novel It does not tell a cinematic story. Over the course of more than 1,100 pages, the massive 1986 tale of horror involves a killer alien clown haunting children in Derry, Maine, and then turning them into lunch on a 27-year cycle, while also flip-flopping between its adult characters and memories of their traumatic childhood. When they’re not being terrorized by Pennywise, the shark-toothed clown of our nightmares, they’re sharing psychic experiences with a benevolent turtle, evading a gang of King’s typically psychopathic bullies, and conducting strange rituals born from entrenched superstitions and fantasies. Even so, the first big-screen adaptation by director Andy Muschietti simplifies the material into an average, occasionally heavy-handed supernatural horror picture with an above-average cast of pre-teen performers. The film adopts a similar approach to other recent literary material with franchise potential (like The Hobbit) and cuts the book’s story in half. By centering the action exclusively on the younger versions of the book’s characters, distributors at New Line Cinema have secured themselves an inevitable sequel following the adult counterparts, reportedly due in 2019.

Moved from the late 1950s to the late 1980s, the adaptation by Chase Palmer, Gary Dauberman, and Cary Fukunaga (who was originally going to direct) has the usual string of faithful moments and deviations from the source material. The new setting facilitates a nostalgia factor for today’s middle-aged viewers, complete with references to New Kids on the Block, Tim Burton’s Batman in theaters, and plenty of other pop-culture references. The resituated era also follows in the wake of Netflix’s instant favorite Stranger Things, the ’80s-set thriller about a group of children hunting a mystical creature. That show was a loving pastiche of various King stories, including The Body, Firestarter, and of course It. The cycle of influence has come full circle as Muschietti’s film borrows from the series’ alternating humor and horror (not to mention one of Stranger Things’ leading young actors, Finn Wolfhard), suggesting perhaps that Stranger Things’ popularity may have justified the production.

Fans of the ABC network’s televised miniseries from 1990 fondly remember Tim Curry’s creepy clown, who helped established the story’s memorable lines like “You’ll float too.” Here, Bill Skarsgård (brother of Alexander, son of Stellan) puts on the clown suit as Derry’s longtime haunter, a shape-shifting sewer-dweller with a taste for fear. In the effective opening sequence, easily the most closely adapted from the book, six-year-old Georgie (Jackson Robert Scott) follows a homemade paper sailboat in the rain, only to meet his grisly demise when faced with Pennywise the Dancing Clown—seen as a pair of glowing eyes, bad teeth in an over-salivating mouth, and a flurry of aural trickery. Creepy though Skarsgård’s performance can often be, Muschietti doesn’t seem to trust it.  Very rarely is Pennywise allowed to inhabit the frame on his own. The character has been accentuated by a copious amount of CGI augmentation (necessary in more monstrous sequences) that distracts from the inherent terror of an evil clown. Note the silly, computer-generated effect that blurs the background of Pennywise’s more violent moments, making him pop artificially from the screen; or the digitally rendered array of teeth hiding inside Pennywise’s head, like some kind serrated horror hole. None of the more FX-oriented qualities of the character match the nightmare power of Pennywise himself, grinning with a red balloon in hand. 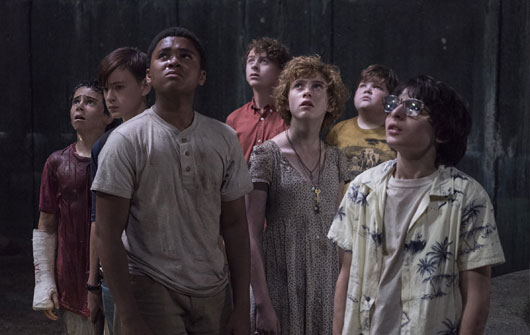 Moreover, most of Pennywise’s brief, surreal scenes have been drowned-out by Benjamin Wallfisch’s overblown score that punctuates, and perhaps remains the root cause of, most of the film’s many rather cheap jump scares. Several scenes feature one of Pennywise’s hair-raising creations (gooey lepers, a warped painting-come-to-life, and the random appearance of a mummy) leaping from the darkness to an auditory jolt, startling the viewer out of their seats. It’s an effectively scary tactic, to be sure, albeit too easily achieved. Unfortunately, Wallfisch’s score applies a similar amount of wistfulness and grandiosity to the smaller, more intimate scenes, delivering a film that almost always feels mannered in a distracting way. Set aside the music, however, and the film delivers a compelling narrative thanks to its characters, whereas the horror aspects are the least compelling component of the film.

The “Losers Club,” as they call themselves, consists of an archetypal group of King outsiders that resemble any number of cinematic kid-gangs from The Goonies to The Monster Squad. Their leader is Bill (Jaeden Lieberher, from Midnight Special), the older brother of the later Georgie, whose stuttering hasn’t been an impediment on his bravery. He’s followed by the hypochondriacal mama’s boy Eddie (Jack Dylan Grazer), their Jewish friend Stanley (Wyatt Oleff), and the sex-obsessed chatterbox Richie (Wolfhard, stealing the show). As school lets out for the summer and they make plans to search for the long-gone Georgie, the Club gains new members in Ben (Jeremy Ray Taylor), a shy bookworm interested in Derry’s high-body-count past; a home-schooled farmboy, Mike (Chosen Jacobs), who’s also the only black kid in town; and the tomboyish Beverly (Sophia Lillis), who brings an unsure female element into their group. Of course, everyone’s heart is aflutter around Bev, and she remains the impetus in a triangle including Bill and Ben. Bev may also be the most complicated character of the bunch, given her chain-smoking, thoughtfulness, and sexually abusive father.

Riding bikes around Derry and playing detective, the members of the Club experience individual waking dreams brought about by Pennywise. Bev experiences the worst of the hallucinations when her bathroom sink spews goopy blood and covers everything in a coat of red only her fellow Losers can see. And when they’re not evading their worst nightmares, they’re avoiding the mulleted Henry Bowers (Nicholas Hamilton), the sort of irredeemable King crazy who carves his initial into a victim’s belly or tries to run the black kid out of town. On the strength of the young cast alone, It becomes an engaging and intimate narrative. Each of the child actors gives a believable performance that never seems like child acting. Best of all, the Losers Club has chemistry and a kind of lived-in friendship that seems developed off-screen—the sort that made Stand By Me and Stranger Things so relatable and accessible. The only question that remains is whether the sequel’s players will be as charming or well-cast in the adult roles.

Cinematographer Chung Chung-hoon, a longtime collaborator with Park Chan-wook, gives the film an impressive physical reality that, supported by the rich production design by Claude Paré, lends the film a textured visual quality outside of the ho-hum digital effects. Regardless of looking sharp, no viewing experience in recent memory has been more distracting for its use of arch music and on-the-eardrum sound design. The film’s abrasive approach has replaced the psychological horror of the book, which mined its characters’ worst fears and brought them to life, with gimmicky shocks that feel typical in today’s supernatural-saturated horror genre (an approach that recalls Muschietti’s previous feature, his first, Mama from 2013). When the scary things emerge from the dark and turn out to be digital specters, it’s not all that terrifying. More effective is our investment in the characters and their fates, as well as the individual performers and their ability to convince us of their terror. It should not be hailed as one of the great Stephen King stories on film. Frank Darabont, Rob Reiner, Stanley Kubrick, John Carpenter, George A. Romero, and David Cronenberg have each made better. Then again, perhaps after the sequel, the sum may be greater than its parts.