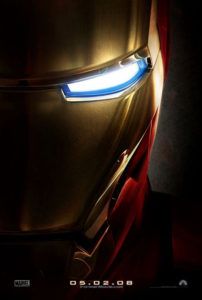 Finally independent enough to produce their own films, Marvel Enterprises delved into motion picture territory to produce their first self-financed venture, an adaptation of their metal-clad superhero comic Iron Man. Hiring director Jon Favreau was their first correct decision, as Marvel producer Avi Arad collaborated with Favreau (acting) on the dud Daredevil. But their greatest success was not conceiving the hero’s eye-popping technology or translating the story with pitch-perfect realization for film (though both are true of this project); rather, the genius here lies in casting Robert Downey Jr. as Tony Stark.

Bazillionaire weapons manufacturer, smart-mouthed genius, and reckless celebrity playboy all describe Stark, who Downey Jr. embodies with lovable bravado. Indeed, Favreau admits he cast the once-maligned star because both actor and character share similar traits. Downey Jr.’s long battle with drug addiction was well publicized years back, while Stark has similar dark territory. The comic character is a known alcoholic, though Favreau omitted that detail in the film, alluding to Stark’s dependence on the drink throughout, but never in such a manner that we raise an eyebrow. No, Stark’s affliction for this origin story is his conscience, weighing down on him heavily after seeing the horrors birthed from his life’s work. The story begins with Stark pitching his company’s latest missile design, the Jericho, to the American military in Afghanistan. He quips to laughing soldiers that peace never earned him a dollar. All at once they’re attacked by an ambiguous terrorist group using weapons with “Stark Industries” stenciled on the side.

Imprisoned and barely alive, Stark requires a magnetic heart doohickey to survive, linking the character forevermore with technology to a physical extreme. He’s told to build a Jericho missile by his captors—or else—but instead he constructs an armored metal suit to escape, delivering a wallop to his kidnappers in the process. Upon returning home, he finds his company’s long-standing-yet-irresponsible war profiteering shame-worthy, seeing directly what damage his own weapons cause. The company’s Number Two, the chrome-dome Obadiah Stane (Jeff Bridges, surprisingly well-suited for his seedy role) balks at Stark’s initiative to abstain Stark Industries from future arms dealings, hardened on logic that those with the biggest guns keep the peace (and incidentally, the dollars that go with weapon sales). And so, keeping his plot secret, Stark builds himself a streamlined suit capable of flight, with a seemingly unlimited source of power, and wowing sci-fi weapons to boot. Rather than sell his suit to the highest bidder within the American government, Stark initiates a personal quest to rid the world of weapons he created that now cause misery abound. 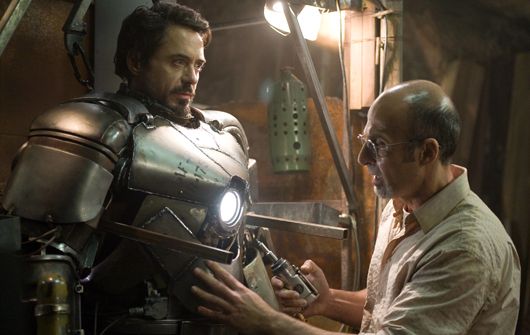 Scenes with the Iron Man suit are given incredible personality, not only because Downey Jr.’s rampant, improvised dialogue is maintained, but because we’re not watching a clunky piece of machinery operate. This isn’t Robocop, after all. Effects wizards at Industrial Light & Magic helped construct a suit that moves freely with an actor inside, allowing for maximum flexibility. Granted, more complicated scenes of flight and battle are rendered with flawless CGI, but we never feel an absence of humanity when Iron Man is in action. Possibly because Downey Jr.’s personality is vivid enough to penetrate adamantium.

What an unlikely hero Downey Jr. makes on and offscreen. Immediately embodying Stark’s lovable rogue persona, even his scenes shared with inanimate objects are funny. A number of the film’s best, most hilarious moments involve Stark inventing the Iron Man suit, which was thankfully a long process not rushed in some cheesy montage. We grow to adore the character and the metallic mask, because we witness its assembly from start to finish as a labor of love. Perpetually joy-ridden and dazzled by the confident stylings of Stark’s crackerjack wit, Downey Jr. steals the character for himself and makes this movie exclusively his, which by no means is a negative.  Iron Man, Tony Stark, and indeed Robert Downey Jr. make up a sort of rock ‘n’ roll team befitting hard edged guitar riffs. Ramin Djawadi’s heavy metal score more than accommodates, leading inevitably to Black Sabbath’s “Iron Man” to ring over the end credits. Sewing in grandiose, important music might have given the film an inaccurate takes-itself-too-seriously message.

The chemistry between Downey Jr. and Gwyneth Paltrow, playing Stark’s dutiful and lovelorn scarlet-haired secretary Pepper Potts, works simply and believably. Also present in the cast is Terrence Howard, playing Stark’s friend and soon-to-be apprentice Jim Rhodes, likely to become War Machine in a possible sequel (Rhodes takes a look at Stark’s silver prototype armor and confirms “Next time.”). Every Marvel comic-to-film adaptation needs a Stan Lee appearance; here he’s mistaken for another kind of playboy. Keep an eye out for Favreau making a welcomed cameo as Stark’s bodyguard. And you may also want to wait after the credits for a brief special appearance by none other than… well, just wait and see.

Marvel’s money troubles over the years are no secret; they’ve regrouped by way of financially successful adaptations that allowed for this self-produced effort, without the need for Hollywood putting on its “creative” cap. Instead, Paramount Pictures only distributed Marvel’s picture. Should Marvel’s product do as well as expected, word has it all interested parties expect to get underway on a sequel for release as soon as 2010. Furthermore, Favreau has dropped mention in more than one interview of his plans for a potential trilogy. Couldn’t come quickly enough for this critic. His film tops Marvel’s adaptations, reaching the rare greatness of Spider-Man 2 and X2: X-Men United. My only hope is that Favreau’s prospective sequel(s) would outdo the original as certainly as those films outdid theirs, which, considering its basis, seems quite the task.

Favreau’s direction may not have the conceptual stylistic application of, say, Christopher Nolan on Batman Begins or Guillermo Del Toro on Hellboy, but his approach fits the characters within. Notice the balance between blockbuster-sized thrills and rewarding narrative structure; such equilibrium is a rare treat. I think Favreau has found a perfect symmetry of popcorn-munching fun, relevant thematic content, and strong storytelling. Iron Man reaches the pinnacle, and surely goes above the comic genre to become one of the most enjoyable escapist films in recent memory.