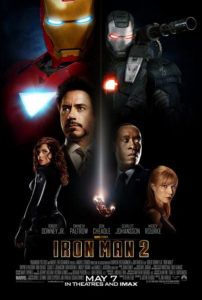 The most extraordinary aspect of Iron Man 2 is how it brings together the film’s seemingly unending string of subplots, tightly confined inside a mere 2-hour runtime, and makes the process feel effortless. Filled with wowing action sequences and sharp dialogue, this fast-moving piece of summer entertainment is a worthy follow-up to the splendid original. It may not contain the emotional lift of its predecessor, which upon revisitation is hindered by those standard origin story requirements, but it continues the saga of Robert Downey Jr’s slick Tony Stark and his metal superhero suit with anticipated charisma.

Now that he’s announced himself to the world as the first openly public superhero and declared himself the posterchild for world peace, the egomaniacal tech mogul Stark develops a few enemies, some jealous, some looking for revenge. Those concerns are secondary, however, to his own personal problems. Tony Stark is dying. His own glowing chestpiece, the device which keeps him alive, is poisoning him. Faced with inevitable death and, in a way, plagued by the responsibility of being Iron Man, Stark begins to crack and becomes even more reckless. He promotes his trusty secretary Pepper Potts (Gwyneth Paltrow, charming in the role) to CEO of Stark Industries, hires a new assistant Natalie (Scarlett Johansson), and resolves to live more dangerously than usual.

Meanwhile, a Congressional committee led by Garry Shandling’s petty Senator Stern wants Stark to make his Iron Man suit a weapon exclusive to the U.S. military, to be further developed by their own weapons manufacturer Justin Hammer (Sam Rockwell). Of course, Stark refuses, inspiring Hammer to look elsewhere for technology that will impress his superiors. Hammer’s own failures to make a suit similar to Stark’s have failed, but he sees potential in the criminal Russian physicist Ivan Vanko (Mickey Rourke). The intense, tattooed Vanko believes his father’s career and secrets to the central arc reactor were stolen by Tony’s father Howard Stark (John Slattery). Now hungry for revenge, the younger Vanko is arrested after trying to kill Stark with electric whips that slice through metal with ease. Hammer uses his influence to break Vanko out of jail, then commissions him to build an army of metal suits to rival Stark’s.

Add to this turmoil Stark’s best friend, Col. Rhodes (this time played by Don Cheadle), taking an Iron Man prototype to the military for weaponization, not to mention the duplicitous intentions of his new secretary (hint: her codename is Black Widow), and the film finds itself with several subplots that need shaping into a whole. And yet, these storylines all come together in the finale and manage to expand on the characters abound in an extremely satisfying, crowd-pleasing way. The film shows us the consequences of Stark’s impulsive choice in the first film to make his alter-ego public, and hence what it means to be Iron Man. In a way, Stark’s growth in the film is analogous to the hero’s lesson in The Dark Knight, in that demonstrating power in a public arena will produce bad people who will inevitably want to dethrone you. Being in that position requires responsibility, and because Stark’s persona is so pointedly irresponsible, his story remains an engaging one. 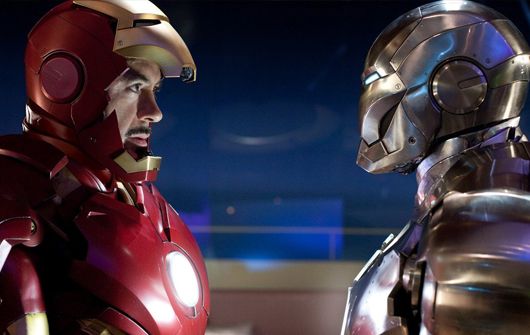 Director Jon Favreau, working from the script credited to Justin Theroux, manages a cast that improvised dialogue and, as evident onscreen, had a blast shooting this thing. Favreau’s specialties are proficiency with technical detail and a penchant for comedic timing, and just as he did before, he brings those qualities together for a polished, workmanlike product enlivened by the general virtuosity of the cast. Downey and Paltrow do wonders as usual, almost (stress almost—Downey is just a hoot) enough to take them for granted, but the real joy here are the supporting players. For comic book fans, the film’s combination of the characters Whiplash and Crimson Dynamo into the amalgamation of Rourke’s Vanko seems like an inaccurate but natural one, and it helps that Rourke has such notable presence in the role. Though, as the pathetic, second-string Stark-wannabe, Rockwell is brilliant and steals every scene he’s in. Shandling plays the senator you love to hate, Samuel L. Jackson is effective in more scenes as Nick Fury, and the dry but mouthy Agent Coulson is given some memorable exchanges with Stark thanks to Clark Gregg. Favreau has even given himself some more scenes, as Stark’s bodyguard Happy Hogan, to show off his skills in both comedy and boxing.

Coming off both Iron Man and The Incredible Hulk in 2008, Favreau and Marvel Entertainment found themselves responsible not only for the success of one film, but the triumph of a whole series of blockbusters that will crossover, all leading to The Avengers, reportedly due in 2012. Accordingly, there’s some posturing done in this film to establish ideas and characters that will be further explored in future movies (stay after the credits for a nod to the next Marvel film, Kenneth Branagh’s Thor). But never do these details, embedded in the backdrop as winks to those looking, distract from the purpose of the story. Stark’s lesson here doesn’t contain the same soul-searching quality of the original film, but he answers enough questions about himself, his past, and the responsibilities of being a superhero to secure his footing for upcoming appearances in Avengers-related material.

Iron Man is the heavy metal figure of the superhero movie. Keeping in line with this music metaphor, Batman serves up an emo-serious Goth-boy; Spider-Man swings as the ultra-pop star; Superman compares to squeaky clean Christian rock; Wolverine, with his flannel and cigar and motorcycle, treads the highways as a pseudo-Bob Seger (in Avengers terms, The Incredible Hulk is death metal, Thor will probably be more fine-tuned classical, and Captain America, with any luck, will be the equivalent to George M. Cohan). But Iron Man simply rocks, as evidence by the AC/DC-laden soundtrack. Iron Man 2 is a helluva lot of fun, full of action and laughs enough to please even the casual fan. Favreau and Marvel have assembled another glorious hit. And despite the somewhat cluttered presentation that might challenge some viewers to keep up, they’re continuing to prove that a superhero movie doesn’t need the “superhero” qualifier to be, simply, a good movie.