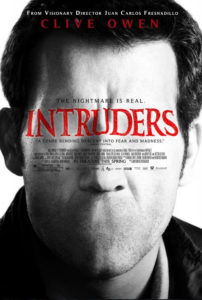 Intruders is the kind of thriller that, despite a lot of interesting ideas, some compelling moments within, and an attractive cast, is left undone by an absurd ending. Not that there are high expectations set by the movie’s early scenes; right away we become acutely aware of how its director, 28 Weeks Later helmer Juan Carlos Fresnadillo, is working from a meager budget but stretches his limited resources too far. The opening shows a young boy named Juan (Izan Corchero) writing a story about a creepy figure from his dreams named “Hollowface”. When Juan goes to sleep that night, Hollowface, a hooded and faceless figure enters Juan’s room and tries to steal the boy’s face. The monster is present in shoddy computer graphics whose poor quality instantly lowers our expectations. And while the plot leaves us with questions (Did the boy’s story bring this shadowy creature to life?), 1 hour and 40 minutes later you’ll wish you hadn’t bothered asking.

The story, credited to Nicolas Casarigeo and Jaime Marque, follows Juan and his nervy mother Ella (Pilar Lopez de Ayala) in Spain as they fend off attacks from Hollowface, and seek help from a well-intentioned priest (Daniel Brühl, from Inglourious Basterds) to exorcize the shrouded creature from Juan’s nightmares. Meanwhile, the story cuts to London where John (Clive Owen) and Susana (Carice van Houten) face similar troubles with their 12-year-old daughter, Mia (Ella Purnell). One day, Mia finds an old story hidden away in a wooden box. The handwritten story speaks of a creature named Hollowface. Mia decides to expand on the story herself, and as she writes, she finds that what she’s writing comes true. Hollowface is indeed out to get her, and he appears in her room at night to steal her face for his own. John tries to play the protective father, but his efforts become suspect when his newly installed surveillance camera reveals John battling himself in what he thought was a face-to-face encounter with the monster.

Once the authorities get involved, they claim John and Mia share the same delusion. Perhaps this is one of those horror movie situations where no one but the haunted protagonists can see the bag guy. After all, how could Juan and Mia’s stories be related, but unfold at seemingly the same time two countries apart? The answer-in-the-form-of-a-twist will not come as a shock. You may have already figured it out from my vague plot description. And though I would typically argue the presentation of this kind of story is more important than the story itself, this is the kind of horror-thriller that depends on a satisfying conclusion. My preoccupation with the eye-rolling finale is not to suggest Fresnadillo has made a movie devoid of style; he employs an effective use of dark spaces and surprising lack of horror clichés. He never relies on formula “boo!” and “gotcha!” moments to get by, which is unexpected given the material. But his uses of darkness and suspense hardly make up for the silly conclusion.

Working against Fresnadillo and everything the movie hopes to accomplish with its would-be twist are the cheap production values. All funds seem to have been spent on tagging its two top-billed performers, Owen and Van Houten, both of whom have failed to live up to their potential after their breakthroughs (The Bourne Identity and Black Book, respectively). They fill their roles just fine, but not in any memorable way. Instead, we’re more concerned with Hollowface and how poorly constructed a creature this is. The thing is laughable, like a cheap videogame or something out of the 1997 reissue of Star Wars. The special FX crew might have stolen the same program Peter Jackson used to create the Grim Reaper ghost-thing from The Frighteners. As a result, what should be scares are catcalls and derision.

Co-funded by British and Spanish backers, there’s an evident push to make something akin to those wonderful Guillermo del Toro-produced chillers as of late, stuff like The Orphanage or Don’t Be Afraid of the Dark. The themes are Del Toro-esque, involving a youngster whose imagination may or may not be the cause of a horrific predicament. But the story devolves into moronic psychobabble to explain away what’s actually going on, and in doing so makes us feel stupid for ever having worried about someone’s face getting stolen from them. Intruders is the worst kind of supernatural yarn, because it refuses to concede to its lowbrow audience and remains far too stupid for anyone with loftier expectations. No doubt Millennium Entertainment realized this too and thus seriously limited the movie’s theatrical distribution. Aside from Owen and Van Houten, who both have natural presence, there’s nothing here except dissatisfaction and ridicule waiting in the shadows.