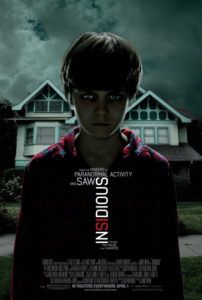 ou have to give credit where it’s due: Insidious does what it sets out to do—scare the bejesus out of its audience. Heavily inspired by Sam Raimi’s Drag Me to Hell, this spooky tale makes the most of its PG-13 rating and utilizes an arsenal of horror movie devices—jarring sounds, lots of darkness, and sudden startling imagery—to create an unnerving experience. Director James Wan and writer Leigh Whannell, creators of the beaten-to-death Saw franchise, lift themselves out of the gory torture porn realm for some genuinely unsettling material, and without buckets of blood to saturate the screen. The result isn’t particularly original or inventive, but Wan knows how to use his familiar bag of tricks to makes us squirm and jump at the right moments, and today that’s rare among this brand of haunted house fright movie.

Married couple Josh and Renai (Patrick Wilson and Rose Byrne) move into a creaky house to start over, although exactly why they need a reboot isn’t explained. They barely finish unpacking when their eldest boy, Dalton (Ty Simpkins), takes a fall and, the next day, ends up in a non-coma that doctors can’t explain. With Dalton on life support, Renai begins to hear whispering in the baby monitor and see phantom figures through the window or in dark corners. She insists on leaving to yet another new home, but the occurrences follow them. Josh’s mother (Barbara Hershey) suggests they see her medium friend, Elise (Lin Shaye), and Elise’s two squabbling ghostbuster nerd assistants (Whannell and Angus Sampson). Elise explains Dalton’s astral-projected soul has been trapped in an extra-dimensional world called “The Further”—a place where malcontent ghouls wait to sneak into the empty vessel bodies of soul-travelers like Dalton.

Nevermind how silly the explanation sounds; it’s the haunted house ride that keeps us involved. Though openly Wan and Whannell have cited The Exorcist, The Innocents, and Poltergeist as their main sources of inspiration, as said before, they owe more to Raimi’s spook-a-blast film from 2009. Both contain a goat-hoofed creature haunting an innocent with loud booms and dangerous shadows; both begin and end with their title cards filling the screen; both employ deafeningly harsh multi-layered strings in their music scores. Moreover, both films make smart use of their PG-13 rating and produce a result scarier than any R-rated horror fare in recent memory. Paranormal Activity’s Oren Peli is credited as one of the producers, and so perhaps his influence helped the writer and director achieve the slow-burning suspense that builds throughout the first two-thirds until the shocking final act hypnotisim-cum-exorcism.

But like the recent Source Code, this film also ends with a silly moment that’s bound to inspire audible “gimmie a break” reactions among moviegoers searching for a practical conclusion. It’s one of those endings where the movie should take off for another few minutes to achieve a satisfying end, but then doesn’t. The horror genre is more accustomed to unsettled last-second twists, however, so it’s entirely possible audiences will overlook this quibble in the grand scheme. One also can’t blame a viewer for chuckling at the filmmakers’ obsession with dolls and masks, such as Saw’s tricycle puppet or the ventriloquist dummies from Wan’s Dead Silence. There are eerie dolls everywhere in Insidious; there’s also a Jeepers Creepers-esque use of an old tune to send shivers up our spine when it starts skipping on the record player (never has Tiny Tim’s falsetto of “Tiptoe Through the Tulips” been so chilling). Such familiar tools of the trade are hackneyed at times, but should be forgotten next to some of the more inspired set pieces and visuals.

In an attempt to create did-I-just-see-that reactions, Wan avoids bright lighting and mutes all colors in his frame, with the exception of his Darth Maul creature expressed in bold blacks and blood-reds—its sudden appearances early on are so brief that our imagination fills in the blanks and makes them all the more frightening. Wan unfortunately makes the mistake of showing us too much, when in the finale the principal ghost-thing appears in badly conceived CGI and takes us out of the moment. This is contradicted by a voyage into the foggy, all-consuming blackness of “The Further”, which offers terrifying glimpses of pale figures in the dark. Overall, Wan orchestrates an effective assault on the senses, making us jolt and squirm no matter how silly the plot may sound. Insidious may be familiar territory, but it operates at a level that can’t help but make flesh crawl. For horror fans, that will be enough.