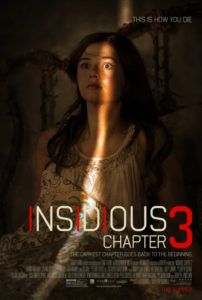 Insidious: Chapter 3 marks the second unwanted sequel of director James Wan’s tense 2011 original, yet another paranormal thriller produced by Jason Blum’s Blumhouse Productions (The Purge, Sinister). The well-received, low-budget Insidious had plenty of scares and technical tricks up its sleeve, but just like Chapter 2 the latest entry feels cheap by comparison. To be sure, Chapter 3 stands alongside last year’s Annabelle, the prelude to The Conjuring (2013), as an obligatory prequel, made more because of the box-office opportunity cost than there being more story to tell. Writer/producer Leigh Whannell takes over directing and scripting duties, having collaborated with Wan on Saw (2004) and Dead Silence (2007), while Wan remains on as producer. Unfortunately, Whannell has none of Wan’s formal bravura or even control of his craft, and the result is visually muddy and uninspired storytelling.

So far, each Insidious movie has been modeled after its corresponding entry in the Poltergeist series. Consider the original, wherein the family child is kidnapped by an angry specter, taken to the spirit world, and eventually rescued by an eccentric medium. Sounds awfully familiar to the first Poltergeist (1982), doesn’t it? Chapter 2 opened in 2013 and followed the plotline of Poltergeist 2: The Other Side (1986), where the grumpy ghost infects the paterfamilias and turns him into a bloodthirsty lunatic. Keeping true to form, Chapter 3 follows the haunted apartment complex scenario of Poltergeist III (1988). However, instead of haunting the Lambert family (consisting of Patrick Wilson, Rose Byrne, and Ty Simpkins), the filmmakers focus on a new family’s experiences with returning medium Elise (Lin Shaye) and her eventual cohorts, web-based paranormal investigators Specs (Whannell) and Tucker (Angus Sampson).

Set “a few years before the Lambert haunting”, Chapter 3 concerns the Brenner family, made up of clueless widower Sean (Dermot Mulroney), teenage daughter and aspiring actress Quinn (Stefanie Scott), and underdeveloped preteen son Alex (Tate Berney). The family has all the customary, yawn-inducing problems: Sean is a dense single father who can’t do anything right for his children, forgetting Quinn is a vegetarian and bugging Alex to get to school on time. Quinn has a crush on the boy in the apartment next door (Ashton Moio), but Sean glares at him disapprovingly. With the recent passing of her sick mother, Quinn has been trying to contact her through the spirit world. She visits Elise to help reach her mother, but following some spooky encounters, Elise fears using her gift to speak to the dead.

When she first meets Quinn, Elise warns her, “If you call out to one of the dead, all of them can hear you.” But it’s too late; a demon has already attached itself to Quinn. When Quinn returns home, a number of strange incidents occur—eerie shadows, spooky footsteps, cracked ceilings, etc.—followed by a startling accident that leaves Quinn bedridden and easily terrorized by a nasty monster called “The Man Who Can’t Breathe”. Before long, Elise must rescue Quinn, whose soul (half of it, actually) has been taken into the netherworld called The Further. She goes back and forth about whether to help at first, worrying about a woman in black in The Further (who will eventually kill her at the end of Insidious). And once Elise arrives, every line of dialogue out of her mouth sounds like she’s making it up on the spot. “He already has half of her soul, and now he wants the rest,” she explains. Who knew a soul could be divided in such a way? Regardless, Shaye somehow makes it sound plausible.

While Shaye is effective and the best part of the original, she doesn’t show up at the Brenner’s apartment until about an hour into the movie. In the meantime, we must contend with the silly Brenner family dynamic, which seems drawn from a sitcom. Mulroney’s dad character never has a clue about anything, but at least he doesn’t remain a skeptic for too long after Quinn claims she’s haunted. As Elise goes into The Further to recover Quinn, she engages ghosts in silly hand-to-hand combat in battles that feel more attuned to Mortal Kombat or The Matrix. Long, ineffective setups to sudden jump-scares pad the runtime, offering a few creepy images that recall Silent Hill—including a ghoul with no face, hands, or feet. The Man Who Can’t Breathe might also get under your skin; he slogs along with a breathing mask and manages to generate a few chills. Yet, he doesn’t have the faintest backstory to explain why he’s so peeved.

Meanwhile, the lensing by Brian Pearson is grimy and bleak, and most of Chapter 3 takes place in the dark. Whannell’s bland use of loud booms cannot help but jolt his audience, less out of fear than just being startled by the director’s use of piercing noises and abrupt imagery—including a particularly dumb last shot. It’s a low form of horror, albeit diverting under late-night circumstances. Still, given the title schema, it’s a shame Insidious: Chapter 3 wasn’t subtitled “The Final Chapter” because if it performs well, chances are a Chapter 4 is on the way. Much like the Saw or Paranormal Activity franchises, the stories have run out, but the filmmakers cannot resist making another sequel, no matter how indifferent fans feel about the prospect.