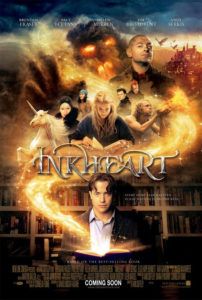 Inkheart follows the standard Hollywood fantasy formula but embodies none of the inherent magic. Based on the series of teenage novels by Cornelia Funke, it represents another in a long line of failed attempts to launch a successful book franchise on film. Recent victims include Lemony Snicket’s A Series of Unfortunate Events, The Spiderwick Chronicles, The Seeker: The Dark is Rising, Eragon, and (sadly) The Golden Compass. Add this film to that growing list of Harry Potter hopefuls. Like most of these stories, Inkheart follows a youngster who finds they have special powers just in time to save the fantastical world they’ve just discovered. 15-year-old Meggie (Eliza Bennett) and her book-repairing father Mortimer or “Mo” (Brendan Fraser) drive about Europe looking for her mother, Resa (Sienna Guillory), who disappeared when Meggie was three. Mo secretly hopes to find a copy of the nonexistent book Inkheart, a thinly distributed text that’s so rare he hasn’t been able to find a print in nine years.

Turns out Resa disappeared into the book after Mo read it when Meggie was just a toddler. Mo is a “silvertongue,” meaning when he reads a book out loud the events therein come true in the reader’s reality. But for every fictional character that’s manifested, a real person is sucked into the book and lost. Some time ago Mo read Inkheart and lost his wife, meanwhile bringing out some nasty villains like Capricorn (Andy Serkis) and questionable types like the fire-throwing Dustfinger (Paul Bettany).

Trouble begins when Capricorn sends his silly goons to collect Meggie, to force Mo into reading out more fictional baddies, namely a smoke monster called The Shadow. Of course, such a trait as silvertonguing is passed down, so Meggie eventually realizes she can read fiction into reality too. Meanwhile, Dustfinger can’t decide which side he’s on, and he’s plagued by memories of Jennifer Connelly. He joins with Meggie and Mo, and together they seek out the author of Inkheart to help, but said writer Fenoglio (Jim Broadbent) serves little help in writing an alternate ending to his book, so that Meggie might read it aloud and stop the evil forces at work. Oh, and Helen Mirren appears as Meggie’s great aunt Elinor, who at one point awkwardly rides a unicorn and charges into battle.

If this doesn’t make any sense, don’t be surprised. The jumbled plot goes from one event to the next without much cohesion. The end goal and the magic used to get there are never clearly described. Things just sort of happen at random. Some noted fictional characters like Rapunzel and Toto appear, which is fun, but not employed enough to keep us interested. Rather than combine known figures from literature in an impossible tale, the story chooses to employ less iconic characters from a nonexistent book that audiences aren’t unfamiliar with. Forgoing the benefit of instantly recognizable characters from popular fiction, we’re constantly wondering who the heck is onscreen, and by the time it’s explained we don’t really care.

Iain Softley has helmed some of the phoniest pictures in recent memory, among them Hackers and K-Pax. His same brand of phoniness applies here, as he directs unfunny moments of comic relief, makes poor use of his otherwise stellar cast, and allows Orientalist music to accompany his sole Arab character (Rafi Gavron from Breaking and Entering playing Farid from Tales of the Arabian Nights by Mortimer Folchart). Everything has an air of trying too hard to make a surefire fantasy hit, but after the production company New Line Cinema went out of business last year, partly due to failed fantasy yarns like this one, it’s no wonder Softley’s film sat on the shelf for a year waiting to finally earn its release.

No one can argue with Inkheart’s pro-reading message, however, even if the “magic of books” testimonials throughout disqualify the need for a bad fantasy movie. Parents should save the price of a movie ticket and read their children some Tolkien, Verne, or Wells if they’re interested in bold escapism. Don’t subject them to this derivative dribble that taps into every genre adventure the cinemas have had to offer in the last twenty years—everything from The Neverending Story to The Lord of the Rings Trilogy. A good book, or one of the good movies this one steals from, would keep the family much more entertained.