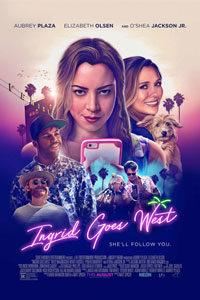 Aubrey Plaza sheds her otherwise typecast personality as a sarcastic, eye-rolling slacker (typified by her April Ludgate role from TV’s Parks and Recreation) to play an unhinged Instagram stalker in Ingrid Goes West. Plaza first appears as Ingrid in a sloppy fit of mania, dressed in a filthy oversized hoodie and obsessively swiping through live wedding images. Each photo from the ceremony has been marked by the bride’s phony optimism (of the annoying “#blessed” variety often found on social media). All at once, Ingrid marches into the wedding reception and douses the bride with pepper spray, inciting a brief stint in a mental hospital. A darkly comic cautionary tale about social media addiction and the phoniness of online celebrity, the film showcases common, artificial behaviors in today’s fanatically connected world. Set aside the deadpan humor and excruciatingly awkward situations, and Ingrid Goes West offers no dramatic arc or important lessons for its characters, turning the proceedings into a peaked, yet thin editorial-of-a-film.

After her recovery in an institution, Ingrid quickly devolves into her old patterns. She fixates on an Instagram celebrity named Taylor (Elizabeth Olsen), who makes the mistake of replying to Ingrid online. Ingrid suffers from the inability to distinguish a follow or friend status from a meaningful connection in the real world. Accordingly, she cashes in her $60,000 inheritance from her late mother and heads to Los Angeles to weasel her way into Taylor’s life. She rents a room from a chummy Batman fanboy and would-be screenwriter Dan (O’Shea Jackson, Jr., charming), and then begins to track Taylor’s movements from Instagram posts. Remaking herself in Taylor’s image, Ingrid doesn’t even seem to enjoy her object of desire’s West Coast millennial hipster lifestyle, complete with avocado toast and, like, totally random trips to Joshua Tree for a sound bath. Nevertheless, she remains drawn to the shallow lifestyle of Taylor and her bearded, wannabe artist boyfriend, Ezra (Wyatt Russell).

To insert herself into their lives à la Single White Female (1992), Ingrid pilfers Taylor and Ezra’s dog—an Instagram star itself—and pretends to safely return the animal. Turning away any suggestion of a reward, she prompts a friendship based on lies. (At this point, Taylor and Ezra’s dog disappears from the film. It’s a central meet cute for Ingrid and Taylor, and apparently essential to Taylor’s life. Regardless, we never see the canine again, quite distrastingly so, after it serves its purpose to the story.) Ingrid gets swept up in Taylor’s picture-perfect lifestyle. But the thing about pictures in general, especially those online: they reveal only the truth (or lies) spoken about them. An image itself has no meaning without context. Taylor has shaped her context by using hyperbolic statements (everything is “the best”), each bought and paid for by sponsors. In reality, Taylor is almost as desperate and troubled as Ingrid, pining after an even bigger online celebrity (Pom Klementieff) and contending with her loose-cannon brother (Billy Magnussen).

Most of these characters remain detestable and resist anything resembling personal development, their images and identities carefully organized and edited to create a like-worthy façade. Everyone talks in online-speak by saying “hashtag” out loud, using dull colloquialisms like “I know, right?” They’re all vulnerable and worthy of our empathy, of course, except director Matt Spicer never allows the characters to be human beings, just monsters. Dan may be the exception, but even his character has been reduced to a dependable sidekick by the final scenes. Ingrid, meanwhile, learns nothing from her experiences; neither does anyone else. The story presents a series of circular events bound to repeat themselves, all stemming from the death of Ingrid’s mother. Indeed, she’s a disturbed character suffering a psychosis from her loss, and the filmmaker never deals with that in any meaningful way. And while this approach, supported by Plaza’s impressive performance, may facilitate a portrait of an all-too-common social malady, the film’s overreaching commentary proves surface level at best.

Nevertheless, Spicer and David Branson Smith’s screenplay took home an award at this year’s Sundance Film Festival, perhaps for the one or two moments where Ingrid sheds her veneer, perhaps for how it captures the way today’s online culture curates itself. The film might’ve been a funny cringe comedy if it wasn’t so disturbing and true. Unfortunately, Spicer does not adequately investigate his topic, and his titular character is denied personal growth. In an odd and unexpected way, the closest relative to Ingrid Goes West is Stanley Kubrick’s A Clockwork Orange (1971), with Ingrid as the resident Alex, the simultaneous criminal and victim of social forces, who’s also wholly irredeemable and unchanging. Similar to the final scene in Kubrick’s film, the last moment of Ingrid Goes West finds her in a hospital bed, having survived an ordeal that should have cleansed her of her addiction. Instead, she has more certainty (and followers) than ever. If only there was a voiceover at this moment: “I was cured all right.”