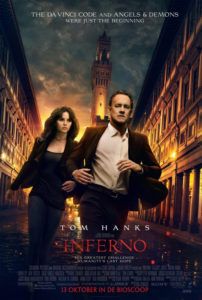 Author Dan Brown reached his pinnacle in the aught-2000s, when The Da Vinci Code became a phenomenon and tapped into the pop-cultural zeitgeist, capturing readers with its fast-paced Indiana Jones-style investigation of history. But director Ron Howard’s 2006 adaptation proved lackluster and the intellectual property diminished, as evidenced by Howard’s less financially successful but more effective 2009 version of Brown’s first book in the series, Angels & Demons. In the subsequent decade, the author’s reputation cooled, and audiences never really warmed up to Howard’s film versions, which might explain why Sony opted not to produce a film version of The Lost Symbol, the third entry in Brown’s series about symbologist Robert Langdon. And so, the arrival of Inferno, Howard’s treatment of the fourth novel in Brown’s series, feels marked by the underwhelming previous efforts and a decided sense of obligation toward maintaining an unwanted franchise.

Of course, Tom Hanks returns to the role that not even his genial everyman quality can make compelling. Then again, Hanks might be the sole reason this franchise continues on film; he’s unquestionably one of the few redeeming qualities about the series overall. A less affable performer would leave Langdon, the dry Harvard professor who saves the world in his spare time, to feel unbearably shapeless. Not that it matters, since Brown treats Langdon like a plot device, a requisite protagonist who keeps the story moving. Indeed, Brown’s elaborate scenarios are plot machines and have little consideration for their characters, and writer David Koepp (Jurassic Park) maintains that quality in his Inferno screenplay.

The story contains all the basic elements of a Dan Brown thriller: A mystery propelled by a vast system of breadcrumbs, each left through a series of cryptic clues; a race against time to save the world from certain disaster; clandestine organizations scheming to stop Langdon from discovering the truth; European locations that give everything onscreen some personality; zero sexual chemistry between Langdon and his compulsory female sidekick; and a third act that stumbles over its feet. Moreover, Inferno hangs on a familiar idea in adventure stories today, in which a villainous type resolves to solve the world’s overpopulation problem by causing a mass extinction event. Samuel L. Jackson’s goofy tech mogul from Kingsman: The Secret Service had a similar notion, as have other movie villains in recent years.

Perhaps this is because Earth’s population, according to any population survey, really has tripled in less than a hundred years, while more than half of all animal species have gone extinct in the last fifty years. These alarming signs concerning the degradation of our natural world prove so frightening that Hollywood cannot tackle them seriously; they must try to resolve them through larger-than-life villainy. It’s unfortunate that the overpopulation issue seems so distant in the viewer’s mind that any kind of solution has been reduced to escapist fiction, but I digress. Overpopulation stands at the center of Inferno in a superficial way. The material never provides any absorbing discussion beyond some factoids dropped by the resident wacko, billionaire bio-engineer Bertrand Zobrist (Ben Foster), who plans to unleash a plague on the world that will thin out the human herd.

Fortunately for the world, Zobrist was also a Dante Alighieri enthusiast—which means he nonsensically left a series of convoluted clues leading to his doomsday pathogen, should anything happen to him. And so, after Zobrist falls to his death in the first scene of Inferno, who better to trace the Dante-laden clues than Langdon? With an obsessive-compulsive doctor named Sienna (Felicity Jones) at his side, Langdon, who suffers from amnesia after being injected with a hallucinogen by an unknown party, now struggles to remember the last two days and must assemble the puzzlework that will reveal Zobrist’s plan. On Langdon’s trail are agents from the World Health Organization, Elizabeth Sinskey (Sidse Babett Knudsen), who has a romantic history with Langdon, and a French agent (Omar Sy). There’s also a private security force, headed by Irrfan Khan’s wily and entertaining administrator, out to stop Langdon’s progress for some reason or another.

Most distracting are Inferno’s occasional descents into Langdon’s apocalyptic hallucinations, each based on Dante’s descriptions of Hell. Howard’s cinematographer Salvatore Totino shoots them in red-toned overlays and, along with abrupt cutting by editors Dan Hanley and Tom Elkins, a heavy application of CGI renders these sequences laughable instead of terrifying. Viewers will appreciate the production’s on-location shooting in Florence, Geneva, and Istanbul, not to mention the presence of art history surrounding the story. But in most cases, the plot propels the characters from one setting to the next without time to dwell on the surrounding beauty. Typical double-crosses and twists saturate the material; however, they’re ineffective because the audience doesn’t feel invested in either Langdon or the central conspiracy.

Inferno remains such middling material and so evenly executed that it’s impossible to feel enthusiastic about the outcome, or even feel much of anything at all about it, beyond a shrug. On every point, Howard delivers a serviceable, workmanlike product. The international cast of otherwise talented performers fills the screen as only living human beings can, each saddled with perfunctory dialogue that keeps the story going but doesn’t have much personality. Koepp, who returns after adapting Angels & Demons, does what he can with the original text. In other words, it’s a faithful adaptation. Nevertheless, Brown’s formulas have become tired and refuse to innovate to such an extent that not even the threat of a worldwide plague can enliven them.