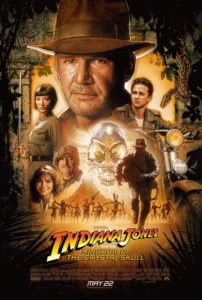 Within the two thrilling, breakneck-paced hours of Indiana Jones and the Kingdom of the Crystal Skull, our hero’s greatest enemy is not flesh-eating ants, undead Mayan warriors, or even Oscar-winning Russian femme fatales. His most dangerous foe is you, the viewer, and your expectations. Not that the film didn’t live up to my own hopes for the latest entry in this wonderful series—it did indeed, with every moment, every dead-on physical gag, every genre mix-n-match, and every delightful embrace of the series’ playful, escapist tone.

But then again, this isn’t the Indiana Jones from your memories. Dr. Jones the archeologist, played with charm only Harrison Ford can deliver, isn’t fighting in the clear-cut good and evil days when Nazi’s were the bad guys and we were the good guys. This isn’t the 1930s, when the other Indiana Jones pictures took place. Rather, twenty years have passed—just as they have since The Last Crusade, the most recent entry movie from back in 1989. This means new technology, both in the onscreen world and also for the filmmakers constructing that world. But if anyone can optimize such devices to create an older era with flawless cinematic bravado, it’s director Steven Spielberg and producer George Lucas.

The cast fires on all cylinders, bringing us back to the jovial camaraderie and near-slapstick humor the series perpetuates. The stern, older face of Harrison Ford doesn’t miss a single note. He has sort of disappeared from the spotlight in the last few years or so, but he makes a pronounced return here, reminding us why, from Indy to Han Solo to Jack Ryan, he’s always been the superstar hero. Ford still embodies our favorite myth-hunter with unparalleled singularity, and he’s accompanied by both new faces and old: Ray Winstone (Beowulf, Sexy Beast) plays Mac, Indy’s Brit righthand-man over the last decade or so. Shia LaBeouf (Disturbia, Transformers) appears as hair-obsessed, switchblade-carrying greaser Mutt Williams, who takes a virtual Short Round role, only as more of an apprentice than a sidekick. John Hurt (Alien, Hellboy) plays the wacked-out Professor Oxley, talking only in riddles, driven mad by the film’s MacGuffin. And we have the lively comeback of Karen Allen as Marion Ravenwood (from Raiders of the Lost Ark), who after more than 25 years returns to reprise her most beloved role.

Beginning in 1957, the story takes place in a Red Scare world riddled with suspicion, deserving an eyebrow raise at the government, and always meddling in secrets. Though I won’t discuss the plot within this review, suffice it to say Indiana Jones has survived to see The Atomic Age, and it’s filled with twists and turns and shocks and scares best left to pulp entertainment—for which Indiana Jones is the Golden God. From this era derives the exploratory technology that seemed so futuristic and limitless upon its inception, but was later grounded in the 1960s. With atomic weaponry came possibility, and with possibility a new popular genre was born: science fiction. Always seemingly on the verge of something new and fantastical, knowledge could not keep up with imagination. To be sure, the nature of Indy’s villain(ess), a sexy Cate Blanchett playing Soviet Irina Spalko, probes deep into the supernatural.

Though computer-generated effects are not cogent to the previous three films, here they’re optimized to fit the 1950s world Indiana Jones now inhabits. We can’t expect that the filmmakers would rely on tangible, classic filmmaking techniques to conceive the vast scope contained within the script (written by Jurassic Park and Spider-Man scribe David Koepp). The original Indy trilogy, made throughout the 1980s, didn’t have the luxury of saying “Let’s CGI this in post.” Sure, with the presence of computer effects you could argue that They don’t make ‘em like they used to. That goes without saying. However, this is a new story set inside a new decade, and those newfangled technologies applied to a franchise normally vacant of such opulence works in a way I didn’t expect to enjoy so lovingly.

Much of your enjoyment of this latest entry resides in your ability to accept that the Indiana Jones series has always been about escapism, never realism. Anyone who balks at Kingdom of the Crystal Skull for being unrealistically over-the-top deserves a stern slap on the back of the head. By my count, Indiana Jones should be dead a hundred times over, having survived booby-traps galore, escaped impossible multi-vehicle chases, and transcended history (and fact) to preposterous degrees. Originally based on Saturday matinee serials, the Indy films have explored genres ranging from horror to Western, and now enter sci-fi territory, always with the design to keep us barely hanging onto the cliff of suspense, no matter how impossible the setups may seem. Through awe-inspiring (and magnificently silly) jungle chases and a wowing climax, events therein are no less plausible than the ghostly finale of Raiders or the railcar chase in Temple of Doom. As always, your suspension of disbelief will be put through the meat grinder. But that’s half the fun.

Rest assured the nostalgic spirit of the Indiana Jones films from our memories remains intact, enlivened with Spielberg’s thriving skill as a director. His ability to keep his audience involved has not waned since he invented the blockbuster with Jaws some thirty years ago. The archetypal formula passing through the previous entries, which Spielberg and Lucas conceived so long ago, is evident here as well. And, of course, Indy himself, though a little older, still makes us laugh and squirm in our seats with giddy excitement. I can only offer one piece of advice: give in to the sheer pleasure of the film, the raw entertainment value, and suddenly you’ll realize you’re loving every minute. This is the way blockbusters are supposed to be: big, bold, absurd, and as always with Indiana Jones, fun as hell.