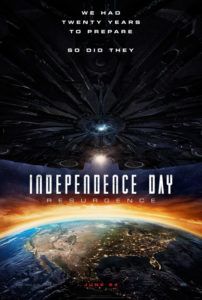 During Independence Day: Resurgence, viewers will lose themselves in the epic destruction and how well director Roland Emmerich and his team of CGI animators compose global devastation. There’s an impressive, tactile quality to the special FX; everything onscreen has been designed with colossal size and fiery bravado. Whereas the 1996 original contains occasionally laughable computer animation—a dog leaping to escape a fireball comes to mind—few can laugh about the quality of the FX in Independence Day: Resurgence, aside from the occasionally obvious use of green screen backgrounds. The overall experience recalls those cartoons in which Tom chased Jerry, bonked his head, and was left momentary delirious and bewildered. Emmerich bludgeons his audience, leaving a halo of little birdies dancing around our head. We cannot help but feel mindlessly drawn by the sheer force of this spectacle, even as we’re repelled by almost every other aspect of the story.

Emmerich has reminded us again and again, he’s the cinematic champion of blowing stuff up real good. In the last two decades since Independence Day, he pummeled New York with Godzilla (1998); he destroyed the American colonies in The Patriot (2000); he froze half the world in The Day After Tomorrow (2004); he annihilated prehistory in 10,000 BC (2008); he flattened and flooded most of Earth itself with 2012 (2009); he detonated the U.S. capital in White House Down (2013); and, in an unlikely move, he even took a few devastating shots at William Shakespeare in Anonymous (2011). Whatever the subject matter, Emmerich always brings a Spielbergian sense of scale and his own not-so-unique brand of cinematic decimation, which has gone on to inspire filmmakers like Michael Bay (be sure to send Emmerich a “Thank You” note for that one).

Audiences have traditionally flocked to Emmerich’s movies, but Independence Day: Resurgence overestimates our fondness for the original, which, thanks to the pre-release hype machine, attracted spectators in droves, making it one of the highest-grossing pictures of all-time in 1996. Contemporary audiences seem to view Independence Day as a product of the 1990s—more of a nostalgic guilty pleasure than a genuinely good hunk of entertainment. At the very least, unlike its predecessor, the sequel resists overt American exceptionalism in choosing its targets for destruction. Whereas its predecessor resolved to depict the annihilation of only U.S. buildings (the White House, Empire State Building, etc.), the sequel actually shows the apocalyptic obliteration of world landmarks such as the Burj Khalifa tower and Big Ben (well, actually, all of London). Undoubtedly, this reflects Hollywood’s ever-increasing attention to the worldwide box-office, specifically in China, over merely just U.S. numbers. 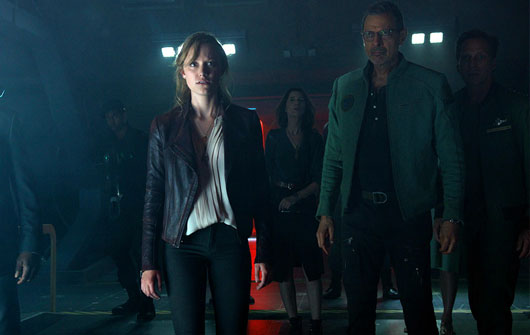 To be sure, in many ways Independence Day: Resurgence feels almost like a remake of the original, just bigger, dumber, and more destructive, in turn reflecting how blockbusters have changed in the subsequent twenty years. The long-in-development sequel went through various false starts and script drafts. At earlier stages, Will Smith was attached to return for two back-to-back sequels, but the studio refused to pay Smith’s $50 million price tag (understandable, given Smith’s series of commercial and critical flops with After Earth, Men in Black 3, Winter’s Tale, and so on). Unwilling to take a potential risk without a star of Smith’s caliber, Twentieth Century Fox greenlit just one of the two proposed sequels, allotting Emmerich a budget of $165 million with which to blow up the world, sans Smith’s famed pilot Steven Hiller.

If you’re curious as to why I’ve barely mentioned other characters or the plot so far in this review, it’s because they’re barely worth mentioning. The story picks up some twenty years after the original alien attack on Earth, during which time the human race has used leftover alien tech to build weapons and vehicles of bigger, faster, and deadlier design. It’s a radically militarized world, which is troublesome but not a surprise because, as the tagline reads, “We always knew they’d come back.” Instead of bullets and missiles, humans now fetishize laser guns and hover ships (“This is way better than a machete,” says one soldier), drooling over the new and improved ways to kill. And despite this drastic military preparation—which would seem paranoid if it wasn’t later justified—it’s a peaceful world according to the new, resolute-beyond-personality U.S. President (Sela Ward), a trigger-happy politician who tells us Earth has been free of war since the 1996 attack.

The characters include familiar faces from the original, and their kin, with a few new additions as well. Having conveniently died offscreen, Hiller is survived by an equally cocky son Dylan (Jessie T. Usher), also a fighter pilot, and his no-longer-stripping wife (Vivica A. Fox), now a doctor. Former first daughter Patricia Whitmore (Maika Monroe, from The Guest and It Follows, a strong presence as usual) has a position in the White House, but worries about her psychically traumatized dad (Bill Pullman), the former President who saved the world, and who now looks crazed behind a bushy gray beard. Patricia’s fiancé is hotshot pilot Jake (Liam Hemsworth, oh-so-bland), the resident hero. Meanwhile, David Levinson (Jeff Goldblum) once again must decipher the clues leading up to the attack of a 3,000-mile wide ship hovering over the Atlantic. Judd Hirsch returns as David’s father, and for some reason (a paycheck) French thespian Charlotte Gainsbourg (from Antichrist and Nymphomaniac) appears as a psychiatrist and David’s new love interest. Elsewhere, Chinese singer-actress Angelababy fills an underwritten role as a pilot; William Fitchner plays a General; and Robert Loggia makes one of his last screen appearances.

A lot of what works about Independence Day: Resurgence doesn’t involve the plot, but rather exploring the new world established by the five credited screenwriters (Emmerich, Dean Devlin, Nicolas Wright, James A. Woods, and James Vanderbilt). I wanted to know more about the 10 years of war between a group of African warlords, headed by Deobia Oparei, and an alien ship that landed back in 1996, unleashing alien survivors on the locals. It’s interesting to learn Brent Spiner’s Area 51 scientist has been in a coma for 20 years, but now suddenly awakes with the aliens’ return, even if the writers too often use his character as comic relief. These superficial asides are fun, whereas, just like the original, most characters are one- or two-dimensional at best. With so many characters and story elements compacted into the shorter two-hour runtime, no one really receives their due screentime. 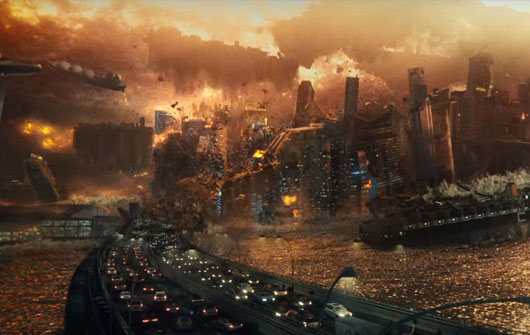 Once the chaos begins, there’s an unfortunate glibness about the mass death before us. “They like to get the landmarks,” says Goldblum’s character. But really, the aliens have brought an unthinkable, and unexplored carnage to a huge portion of the Earth. When in all likelihood billions of people die from the destruction of London and India, the film doesn’t bother taking even a moment to grieve—because that would take away from the cornball humor. At the same time, audiences should have been treated to a surfeit spectacle, enough to blow your eardrums out of your head and eyeballs out of your sockets. Instead, editor Adam Wolfe chops the action up into meta-bits; this approach gives the viewer the basic idea of what’s happened, without actually having to follow a shot-by-shot logic. Consider a crucial moment before the finale when an alien ship explodes; the camera should have reveled in this moment, but the cutting never shows the explosion, just some debris falling from where the ship used to be. Keeping the proceedings under two hours diminishes the action scenes (in other words, ruining the only reason to see this film), and truncates its characters—many of which I haven’t even mentioned, including at least two other comic relief characters.

Beyond the choppiness of the editing, Independence Day: Resurgence suffers from some of the worst writing in recent blockbuster memory. Within the screenplay lies every major problem with the film, from its excess of characters to its eye-rollingly stupid dialogue, and finally to the familiar plot (conceived by marrying Aliens with Star Wars). Also, prepare yourselves for lines like “Get ready for a close encounter, bitch!” and so forth. And watch out for a virulent strain of sequelitis plaguing the story. Once again, a damaged individual decides to clean up his act, shave, and fly a jet into the flying saucer’s sphincter; once again, the survivors celebrate on the salt flats, leaping into each other’s arms and posing for the camera; once again, America is the only country capable of delivering any kind of significant attack against the alien invaders. (You’re welcome, world.)

Although the mind-numbing effect of Independence Day: Resurgence’s intended showmanship cannot be disputed, our minds are numbed for all the wrong reasons. From start to finish, the film feels hollow and empty, the character development obligatory and forced, the action setups undercooked, the plot insultingly predictable. As mentioned, it doesn’t achieve guilty pleasure status, nor is it “so bad it’s good,” and it’s certainly not the “best worst” of its kind. This is sloppy, lazy filmmaking, perhaps Emmerich’s worst film since he arrived in Hollywood in both terms of its writing and technical merits. The production seems concerned less with making a good film, and more about reestablishing a franchise (complete with the promise of a sequel) for Fox’s financial security. Indeed, the whole thing feels like a desperate and failed attempt to repeat the spirit of the original, instead of trying to improve upon it. And any film that makes the original Independence Day seem intelligent and well-made by comparison suffers from some significant troubles.