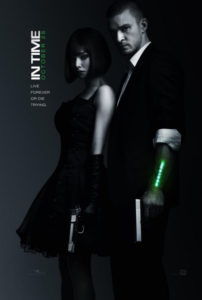 In his latest study into the encroachment of science on humanity, writer-director Andrew Niccol considers Benjamin Franklin’s axiom “time is money” to a literal degree. Much akin to his feature debut, 1997’s Gattaca—a film where the quality of your genetic code determined your status in the world—Niccol investigates another dystopia-disguised-as-utopia sci-fi premise with In Time. Guided by an intriguing premise, Niccol delivers a barefaced allegorical future world that may strike a considerable chord with Wall Street protesters and others deeply affected by the world’s economic crisis. However, after the novelty of the premise wears off, Niccol leaves his audience with a familiar scenario fuelled by narrative clichés (chase scenes, bank heists, etc.) and pun-saturated dialogue, not to mention plot holes galore.

In the film, set presumably in the distant future (although the world doesn’t appear to have changed all that much, so perhaps “alternate future” is more accurate), people live to only 25 years of age, at which point their aging halts and their clock starts. Every person is genetically tied to a fluorescent green digital counter on their forearm, and at 25, everyone receives a year credit, used like money to purchase goods and services. A cup of coffee costs four minutes of your life, a bus ride is two hours, and so forth. Time can be traded and stolen by clasping your wrist to another’s. If you die, your counter goes out. If you have enough time, you could live forever. But in this world, the poor die young; their counters reach zero and they fall to their death, relieving the surplus population while the wealthy accumulate time and live as immortals (in a way, it recalls the world outlined in Daybreakers, with a master class sucking life from the inferior underclass). And in this world the separation of classes is great. You can see here the potential for an allegory of our capitalist society.

“Time zones” divide classes by massive walls, and the protagonist Will Salas (Justin Timberlake) lives in the ostensible ghetto zone. Everyone lives day-to-day in Will’s zone, struggling to make enough time to survive until tomorrow. They run from place to place, always in a rush, scraping for a minute here or there, and sometimes people run out of time and their bodies are left on the street. A gang of local nutjobs (led by Alex Pettyfer) isn’t above robbing strays of their time to survive. Will, 28, lives with his mother (Olivia Wilde), 50, although they look about the same age. One evening, Will meets a man who has 100 years on his clock, but he’s lived too long and wants to die, so the man transfers his time to Will and then commits suicide. Before Will can restore his mother’s time, it runs out. Alone and angry, Will announces his plan to make the rich pay for propelling this grossly unfair world. Elsewhere, Will’s sudden increase in time sparks an investigation by “Timekeeper” Leon (Cillian Murphy), this world’s answer for a grizzled detective.

Will travels to the “zone” of the upper-classes and finds that it moves at a much slower pace, as people there have time to spare and embrace their title as idle rich. He makes his way into a casino where he plays poker opposite Philippe Weis (Vincent Kartheiser), whose wealth is measured in eons, and spies Weis’ spoiled but rebellious daughter Sylvia (Amanda Seyfried). Later, Leon confronts Will, who makes a run for it with Sylvia in tow. Both Will and Sylvia suddenly have limited time, so they’re almost attached by the wrist to survive by feeding each other minutes, not unlike the handcuff meet-cute from Hitchcock’s The 39 Steps. Before long, Will and Sylvia have run off on a Robin Hood-inspired quest to steal time from the rich and give it to the poor, robbing banks in a Bonnie and Clyde-style adventure.

Along the way, an unrelenting number of time puns wear on the viewer. “Your time is up” one says to another before they die, and “I’m gonna clean your clock!” is another way of threatening to murder someone. Niccol misses no opportunity to inject corny puns, nor does he skip over his characters’ many exchanges of time. Twenty minutes of this film must be dedicated to characters clasping wrists and watching their counters increase or decrease. So much time is spent worrying about time, it’s any wonder “the system” (as it is called) was ever established. Who made the decision to apply this device to humanity? Why did society go along with it, given the apparent downfalls? Who’s in charge of this world, aside from the vaguely alluded-to voices of authority heard on Weis’ phone? Where are the other technological advances in this world? Why do the cars look like 1970s classics souped-up with futuristic lights? All of these questions are left unanswered, dismissed by an opening bit of narration by Will that says he doesn’t know and he doesn’t care about the why’s and how’s of his world—he just wants to live.

As the underdog hero, Timberlake is miscast. He headlines an attractive list of young actors, the best-looking of which compose the flourishing upper class. Casting a pop-culture icon as someone who defies elitists, however, seems like a joke on the audience. Timberlake never quite pulls off his rebellious act, nor does Seyfried make her bad girl routine believable. Shouldn’t Will Salas have been played by a more rugged individual who looks like he lives in the slums of the future? Even with buzzed hair and facial scars, Timberlake still looks like a pop star. It doesn’t help that he and Seyfried are given little more to do than run, kiss, shoot guns, and make time-related puns. Meanwhile, Mad Men’s Kartheiser plays a Trumpian villain like he’s auditioning for the next Bond movie. Only the Timekeeper role is filled with fitting composure, a characteristic expected and always delivered by Murphy, even if the character’s motivations for betraying his once-ghetto stomping grounds goes unexplained.

Niccol’s film is modestly stylish in a low-tech way, no fancy CGI backdrops or elaborate visuals to speak of. Cinematographer Roger Deakins shoots empty Los Angeles locales (from the concrete river to Century City) to look like abandoned scenery where the film’s obvious metaphors can unfold. And while Niccol’s message—all but shouted into our ears with a bullhorn—may be an admirable and relative one for contemporary audiences, the storytelling devolves into a lazy, actionized second-half reminiscent of a dozen other sci-fi yarns you’ve probably seen and since forgotten. Despite the premise’s brimming potential and the prospect of something different and initially fascinating, Niccol wastes his time on formulaic story mechanisms that soften what could have been a considerable blow to his target.