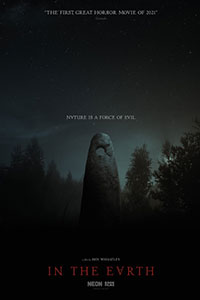 Give Ben Wheatley a small cast of actors, a few tents, some strobe lights, and an industrial-strength fog machine, and he can make a pretty entertaining movie for cheap. In the Earth is the British filmmaker’s microbudget return to his horror roots. He conceived, wrote, and shot the film in August 2020, during the height of COVID-19, similar to last year’s breakout pandemic production, Host. It’s the sort of midnight madness effort that was clearly inspired by Wheatley working through his anxiety about the locked-down world. And he delivers an increasingly bloody and trippy thriller that will make you gasp and laugh—sometimes in the same moment. The story recalls The Blair Witch Project (1999), following two colleagues who head into the woods and find themselves confronted by the resident forest spirit, a malignant force that stacks rocks and assembles ominous stick figures. Toss in an axe-wielding maniac and psychedelic puffball fungi spores into the mix, and you’ve got yourself a familiar journey into the haunted woods.

Over the last few years, Wheatley has overseen ever-bigger productions. After the star-studded High-Rise (2015) and Free Fire (2016), he directed a handsome but soulless adaptation of Daphne du Maurier’s Rebecca for Netflix. In the Earth harkens back to Wheatley’s 2011 blend of hitman thriller and folk horror, Kill List, which has since become a cult favorite. When the pandemic hit, the filmmaker had several projects lined up that were stalled or altogether canceled. His chance to direct the sequel to Alicia Vikander’s Tomb Raider (2018) fell through; however, he landed a gig to helm the big-budget sequel to Jason Statham’s prehistoric shark movie, The Meg (2018), albeit after the world returns to normal. So while things calmed down and Hollywood slowly resumed safe productions, Wheatley took his limited cast and crew into the beech woods an hour outside of London to shoot In the Earth, which debuted at Sundance this year and received limited distribution from Neon.

Wheatley integrates pandemic paranoia into a story about a scientist, Martin (Joel Fry), who follows a park scout, Alma (Ellora Torchia), into the forest outside of Bristol to locate his ex, a fellow researcher. Although the dialogue never references COVID-19 by name, the sight of hand sanitizer,  face masks, and nose swabs rings familiar; less so, a disinfecting body spray. Anyway, an unnamed virus has left society in shambles, though this backdrop does little more than give In the Earth an apocalyptic flavor. The rest is pure folk horror. In the park outpost, Martin notices a mural painted by locals depicting Parnag Fegg, a forest spirit that doesn’t look friendly. Shrugging off this foreboding imagery, Martin and Alma begin a two-day hike that does not go well. But it’s not a malicious legend they encounter; it’s a crazed woodland squatter, Zach (Reece Shearsmith), armed with drugged elderflower juice and a poor understanding of how to stitch wounds properly. 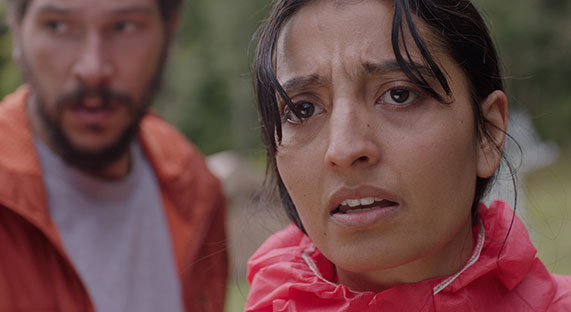 Things soon take a different direction when they finally reach Dr. Olivia Wendle (Hayley Squires), who, in researching how to improve crop growth, has come to believe that all flora is connected. She even speaks to the all-knowing woods with sounds and flashing lights. And so, it doesn’t take long for us to wonder which of them is creepier, the scientist who has spent four months in the woods alone talking to trees or the guy with an axe who takes photos of Martin and Alma to appease a forest god. By incorporating kaleidoscopic and hallucinatory imagery of plants and distorted perspectives in subliminal flashes, Wheatley, serving as editor, creates the impression that Parnag Fegg, or maybe the surrounding forest, has orchestrated everything. Then again, maybe everyone’s gone mad from isolation during the pandemic. Or perhaps forest spores have made them all slaves to the forest’s will.

When things get bloody in the middle section, Wheatley uses practical effects and prosthetics, employing them in a darkly funny manner that penetrates the serious mood. At one point, he sets up a situation where the viewer anticipates a sudden amputation, but instead, he teases us with a grim slapstick of comical delays and gory mishaps. A few scenes later, a character’s poked eye becomes an unlikely event for a riotous laugh. Wheatley’s control over the tone in these scenes remains impressive, even though the macabre humor dissolves in the last third when he resists explaining what we’ve just seen. When In the Earth ends, the viewer might not be able to articulate what happened exactly, but the ambiguous fate of all involved proves satisfying nonetheless.

Underneath it all, In the Earth offers a few possibilities for interpretation. There’s talk about how advanced technology looks like magic, and that perhaps Nature communicates in ways we cannot understand. There are also pagan rituals and sacrifices to consider. Whether it’s an ancient deity or spore-induced delusion that compels the story, Wheatley offers a throwback to John Carpenter-style horror like Prince of Darkness (1987), where some presence of untold power emerges to horrify and corrupt his characters. Clint Mansell’s synth score recalls those composed by Carpenter and Alan Howarth, and cinematographer Nick Gillespie’s textured imagery elevates the production’s low-budget simplicity. And it’s a worthwhile return to form for Wheatley, who may be preoccupied with CGI sharks and unable to make indie horror like In the Earth again for some time.