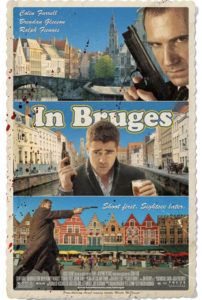 Bruges, the capital city of Belgium, might not be one of the world’s best-known places. For me, having studied early Renaissance Flemish painting, this is the city where museums contain masterpieces by Jan Van Eyck and Hieronymus Bosch. The latter artist, Bosch, is best known for his surreal world-turned-upside-down depictions of Purgatory and Hell. Thus, how fitting that Ray, played by the underrated Colin Farrell, should find himself wandering about museums housing such hellfire imagery, in Anglo-Irish playwright Martin McDonagh’s feature film debut In Bruges.  Coming from Dublin, Ray and his older, wiser, calmer comrade Ken, played by the burly gentle-giant Brendan Gleeson, arrive to learn Bruges remains today’s most well-preserved Medieval city—Ken offers that fact to Ray with much enthusiasm. Ray, however, couldn’t be less interested. “If I’d grown up on a farm and was retarded, Bruges might impress me,” Ray quips. “But I didn’t, so it doesn’t.” That Ray doesn’t appreciate Bruges’ canals or splendid architecture is one of the film’s ongoing jokes, but also one of its most profound ironies.

As guns for hire, Ray and Ken are in hiding, sent to Bruges for an indeterminate length of time for an indeterminate reason, by their boss, Harry (Ralph Fiennes), who is only heard on the telephone until the film’s third act. On his first job back in Dublin, Ray offed a priest (Ciarán Hinds), but not before confessing the crime he was about to commit. Bullets shot through the priest’s back into an innocent church-going patron in the wrong place at the wrong time. Ray’s conscience now torments him about this unintentional kill. Indeed, much of the film hinges on Farrell’s ability to make us believe his character is wrought with guilt, with the weight of tharrell kills a man out of desperation, but can’t seem to get passed the whole murder thing. Here, murder is not Ray’s concern; in his mind the priest deserved what he got, otherwise he wouldn’t have had a contract out on him. It’s the faultless bystander, wholly innocent and unworthy of death when it came, who troubles Ray.

But much of the film concerns boredom, in that Ray sees Bruges as a type of tedium-laden Purgatory. He and Ken are supposed to keep a low profile. They’re wanted men after all. Just quiet sightseeing during the day and room service at night, while they wait for Harry to call with instructions. Ray convinces Ken to go out one night, to take-in Bruges’ architecture lit up with picturesque splendor. They come upon a film crew where Ray meets Chloë (Clémence Poésy), a local who sells drugs to the cast and crew. She agrees to a date with Ray, finding his desperate candor and vulnerability at once humorous and saddening.

Ray also meets Jimmy (Jordan Prentice), a dwarf actor in the film crew’s Bosch-esque dream sequences; he also inspires a number of politically incorrect tirades. Insisting on calling him a “midget,” Ray doesn’t hold back his questioning: “Do you ever think about killing yourself… You know, because you’re a midget?” He goes on to recall the actor-dwarves who have killed themselves, as if Jimmy weren’t already uncomfortable. Farrell’s brutal honesty and candid rhetoric grow from his relaxed, original Irish tongue. It’s a casual performance, but an incredibly affecting one, from an actor too often seen as merely a party-boy. I must not underplay Brendan Gleeson, however, as he too gives a wonderful performance, with fatherly airs, as sympathetic as ever. In movies like 28 Days Later and The General, he manages a supreme kindliness, something he tricks us within this film. We often forget that these are hitmen, as McDonagh displaces them, so they too forget who they are and why they’re there. I should be careful not to divulge much about the plot. Suffice it to say, the movie is about meaningful conversations, idleness, boredom, remorse, hard laughs, stark violence, and grotesque humor—I loved it.

McDonagh’s structure comes off poetic in the end, working out perfectly the way something by David Mamet (House of Games) might. Having won an Oscar for his 2006 short film Six Shooter, which also starred Gleeson, McDonagh is making a name for himself in the film industry, and I hope he keeps making movies. Undoubtedly, there will be comparisons to Pulp Fiction, if only because McDonagh uses hitmen as his protagonists. And yet, Ray and Ken are amiable chaps, not to be turned in to bad guys as the plot wills. In Bruges works so well because its characters feel authentic; even Ralph Fiennes, when he shows up to clean house in the finale, offers humanist ethics to his imperiously vile character. The film’s events flow with natural dialogue, grand views of the cityscape, and contain constant, biting humor. At its center resides a thoughtful morality tale, which keeps us drawn to the film’s characters, and most importantly, doesn’t sell out the way other Hollywood crime thrillers might.