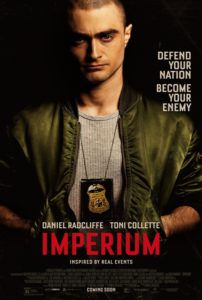 In Imperium, Daniel Radcliffe portrays an undercover FBI agent who infiltrates a white supremacist community to ferret out a terrorist plot. How exactly director Daniel Ragussis intended to use the former Harry Potter star isn’t immediately clear, though it becomes apparent early on that Radcliffe stands out in a number of ways. Perhaps he was chosen for stunt casting in hopes of drawing an unlikely audience to see their favorite wizard take on more challenging material. Maybe Ragussis needed a well-known performer to finance the project, and Radcliffe happened to be interested. Or maybe Radcliffe wanted to try something different and pursued the role, hoping to shake-off his former persona, and he impressed the filmmakers with his ability to channel the multiple dimensions needed.

Whatever the explanation, Radcliffe’s presence doesn’t quite work and feels gimmicky from the outset. Place his slender, rather diminutive stature up against the towering skinheads depicted in the film, and you begin to wonder how they could ever be convinced he’s genuine. Indeed, since this is an undercover agent story, inevitably there are scenes where the criminals suspect one of them is not who he appears to be. Looking around at their skinhead ranks, their gaze would eventually fall on Radcliffe’s character, a short, wiry introvert who knows about things like classical music, and claims to be a former Marine. Cue the Sesame Street song, “One of These Things (is Not Like The Others)”. Radcliffe plays Nate Foster, who may have helped foil a terrorist attack in Washington D.C. in the first scene, but he remains a joke to his FBI colleagues, enduring their inter-office torment—especially after he’s accused of entrapment.

Despite being the kind of guy who enjoys dinner alone with a fine glass of wine and a few pages from Thomas Hardy’s The Mayor of Casterbridge, Nate catches the eye of Angela Zamparo (Toni Collette), a tough and experienced fellow agent with a history of undercover ops. She sees his ability to empathize with people and understand how they think, and she considers his weaknesses (an unhappy childhood, a small physique, a history of being bullied) to be strengths. When six canisters of cesium, which can be used to construct a dirty bomb, go missing, the rest of the FBI investigates a Muslim threat, while Angela convinces Nate that the white power movement is a more likely aggressor. He agrees to go undercover and investigate the Washington D.C. white supremacist network—specifically Dallas Wolf (Tracy Letts), author of books like “Genocide: The Murder of White America” and ultra-right-wing radio host.

Nate begins on the bottom, aligning with a group of aggressive skinheads, working his way up the ranks toward Wolf. Among them, the most fascinating and terrifying specimen remains Gerry (Sam Trammell), a well-to-do family man with a large home, dutiful wife, vegetarian eating habits, and children who spout white power rhetoric. Gerry seems so rational and kind-hearted at first glance; until, of course, he starts talking about Jewish conspiracies and “mud people” taking over America. The screenplay by Ragussis, based on a story by Michael German, doesn’t follow a straightforward narrative line toward the obvious MacGuffins: the cesium and Wolf. Rather, the story goes another, wholly predictable direction.

As suggested, Radcliffe does fine work, but he’s ill-suited for a role and stands out in every scene. He didn’t transform his body for the role (aside from shaving his head), and he doesn’t disappear into Nate. Other critics and viewers may buy Radcliffe in the role, but his presence just didn’t work for me. He never stops being the guy who played Harry Potter, which he’s done successfully elsewhere (Horns and A Young Doctor’s Notebook come to mind). But Radcliffe’s mere presence is only a small portion of the problem with Imperium. Another issue, and it’s a major one, is that there’s no overarching feeling of an imminent threat. Rather than show these people as dangerous, Ragussis is more interested in elevating the film beyond the typical mechanics of an undercover cop drama (recently put to effective use in The Infiltrator). He wants us to understand the basic human drive to be a part of something bigger than ourselves. Through Nate, the story’s empathy machine, Ragussis tries to understand a scary and ugly subculture in America.

The film shows us montages of neo-Nazi rallies and crosses burning; shaved heads; swastika tattoos; and Nate spends a lot of time talking to white supremacists, listening to their reasoning and motivations. As undercover cop movies go, this is the equivalent of Johnny Depp admiring Al Pacino’s mobster in Donnie Brasco, or Edmond O’Brien befriending James Cagney’s crazed robber in White Heat. There’s a familiar moral and personal struggle Nate experiences, made all the more challenging for the audience because he’s empathizing with white supremacists. And yet, for a thriller, Imperium doesn’t contain the requisite tension, and the storytelling remains far too reliant on familiar clichés to achieve something more existential—which seems like the intention here. Overall, the film fails to engage because of its miscast leading man and its unsuccessful attempts to elevate itself above a standard undercover cop yarn.