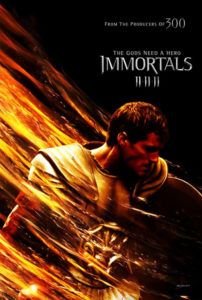 Whether it’s the stunning visual approach by director Tarsem Singh Dhandwar (credited as just Tarsem) or the ham-fisted plotting by scripters Charley and Vlas Parlapanides, much about the Greek myth actioner Immortals feels out of place. Tarsem lends operatic sensibilities to this tale of shirtless men engaging in bloody violence as the likewise shirtless gods watch from on high, interfering only when it suits them. But substandard writing engages a series of genre clichés that cheapen the director’s incredible-looking production. Either Tarsem should have dialed his usual grandiose method down a notch (or three) to suit the film’s obvious commercial drives (it’s advertised as “From the producers of 300”), or the writers should have elevated their screenplay to match Tarsem’s tendency to aggrandize his subjects with slow-motion and beautifully crafted imagery.

Not that Tarsem has always involved himself in narratively credible projects. After all, he’s only made two features before this one. The Cell in 2000 offered Jennifer Lopez and Vince Vaughn investigating a serial killer by entering his demented unconscious mind, rendered via theatrically composed costumes and sets that linger long after the predictable story is over. In that film, the story was common but just good enough to operate in unison with Tarsem’s visual style. Next, he followed with The Fall in 2008, a majestic, delightfully told story about the nature of storytelling itself, but the narrative was just as rich and complex as Tarsem’s presentation. It was a masterpiece. Immortals falls somewhere in the middle. It’s a watchable effort, certainly suited to 300’s fanboy crowds, but too much formula may turn viewers off to Tarsem’s heightening of Greek mythology.

Borrowing bits and pieces from age-old legends, the story finds noble peasant Theseus (Henry Cavill) seeking revenge on Hyperion (Mickey Rourke), after the sadistic Heraclean King personally slays Theseus’ mother Aethra. Hyperion has left countless bodies tortured and mutilated on his quest to destroy the gods; to succeed, he seeks the Epirus bow, the film’s MacGuffin that fires countless high-energy arrows. Fortunately, on a wild night some time ago, Aethra had slept with two gods, Aegeus and Poseidon, making Theseus a god-man (I’m referencing to the myth here; this detail isn’t exactly clear in the film), thus he’s attracted the attention of Zeus (Luke Evans), who hides among mortals in the form of a wise old man (John Hurt, lending gravity to his corny dialogue about doing good for all mankind). Theseus has learned the ways of battle and, after receiving some curious prophecies from virginal oracle Phaedra (Freida Pinto), he sets out on a quest along with an annoying comic relief scoundrel (Stephen Dorff) to recover the bow and stop Hyperion.

Hyperion’s plan involves releasing the Titans, the only beings who can kill a god. They’re caged in a beautiful box prison, black on the outside and gold on the inside; once they escape, they move like scurrying zombies on meth. But the gods are faster. In the final battle, gods and Titans go head-to-head in an orgy of slow-mo bloodletting where bodies are cut in two and heads are smashed galore. CGI provides most of the blood. Rourke is particularly intimidating as Hyperion, although he’s just a creepier, costumed version of his brute in The Wrestler. His victims are decapitated, have their eyes gouged out, and one receives a genital hammering that will make men in the audience squirm. Rourke’s voice is ungodly low, uttering “Witness Hell” to Theseus as he slits Aethra’s throat; later, he threatens Phaedra’s female entourage to divulge her location less they “experience discomfort unique to their gender.” During battle scenes, limbs are chopped and blood spills about. This is a gory film, more so than the similarly R-rated 300.

Cavill is appropriately heroic but Theseus is vastly underwritten, propelled by simple ideas like fate and revenge. Sure, there’s a love scene between he and Phaedra, but the romance feels obligatory, like it would never have happened had the two characters not suddenly stared into each other’s eyes for too long. And though Cavill is cut enough to bring the meat-and-potatoes of a sword-carrying hero, the jury’s still out on whether he’s an appropriate Superman for next year’s Man of Steel by Zack Snyder. None of the acting really stands out. The costumes provide more character than the actors. Having received an Oscar for her glorious costuming on Bram Stoker’s Dracula, Eiko Ishioka’s garbs have so much style and innovative, iconic stature that they’ll simply take your breath away. All any actor has to do is stand there and look regal and the costume does the rest.

Other visual flourishes include the ninety-nine-percent CGI landscapes created by various effects houses, delivering Tarsem’s stylized Greece of 1228 B.C. in computerized glory (and what’s more, in stereoscopic 3D). These dramatic landscapes always seem to exist on the edge of a great cliff, allowing Tarsem’s frame to pull back and show such vistas under radiant skies. Interiors are even better looking, as they’re (for the most part) actual setpeices. The most dazzling example is a labyrinthine shrine of black walls, glittering streams, floors littered with crimson rose petals, and nooks filled with candle offerings; in here arrives a pseudo-Taurus figure with a horned and barbed-wire mask to face-off against Theseus in the hero’s best-known battle. Marble walls, imposing architecture, and a rich color palette add to the film’s overall appeal. For The Fall, Tarsem used few computer effects and found actual, almost other-worldly locations to shoot. Authenticity afforded that film a certain magic, whereas the digitized approach does the same here but to lesser effect.

Beyond question, Immortals represents Tarsem’s pursuit of a considerable paycheck after personally financing his four-year shoot on The Fall. Next for him is Mirror, Mirror, another commercial project and one of two Snow White films due in 2012. If only the script for Immortals wasn’t so humdrum, the striking imagery and digital world on display might have more substance, as without a doubt that’s what’s missing here, much like previous fantasy-laden epics of ancient times: Troy failed to include the crucial gods and fell flat as a result; 300 was a misogynistic piece of hokum; the remake of Clash of the Titan was just plain dumb. For some reason, swordplay epics involving Greek myth are doomed to be blockbuster fodder in the worst way. Even with its flaws, Immortals takes a step closer toward being the kind of artistically credible work this genre deserves to see. Nevertheless, it’s still a so-so movie made better by its style. Entertaining and at times exciting, there’s always something visually interesting onscreen, but the film is not a brainy experience by any means. Then again, it’s not trying to be. What Tarsem needs is to find a script that balances his extraordinary eye for visual audacity with an equally extraordinary narrative. Apparently, that’s easier said than done.