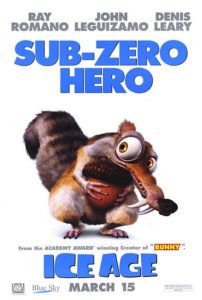 After the first three wordless minutes of Ice Age, where a mute squirrel-creature named Scrat hilariously struggles to bury his sole remaining acorn in a newly formed glacier, everything goes downhill. The ensuing plot amounts to Three Men and a Baby—except, with animals. That those animals originate from a bygone period serves no specific purpose, aside from appealing to children. Though, you may question why Hollywood is obsessed with the migration of animals from prehistory. The answer: Because migrate is all they can do besides eating each other. See The Land Before Time or Disney’s Dinosaur for similar journeys.

Some 20,000 years ago, all creatures great and small moved south toward warmer climates, not including, of course, your average children’s movie assortment of offbeat and mismatched mammals. Manny the wooly mammoth (voice of Ray Romano) goes against the stream and heads north, while the annoyingly lispy Sid the sloth (voice of John Leguizamo) trails behind, hoping for Manny’s protection. Together they run across a human baby, entrusted to them by the child’s dying mother who barely survived a saber-toothed tiger attack. Elsewhere, cat group leader Soto (Goran Visnjic) assigns saber-toothed-tiger-with-a-heart-of-gold Diego (voice of Dennis Leary) to bring the baby back alive for a light snack.

So Diego befriends the reluctant Manny and Sid, promising to guide them to the human camp where they can return the child, but he really brings them closer to Soto. At least Diego feels guilty about it and questions his secret mission, as through their silly adventures, he comes to enjoy the company of his new friends. To hip-it-up, the filmmakers include scenes of mock-snowboarding, “Tai Kwon Dodos,” and plenty of other nonsense. Interspersed are scenes of surprising violence, most of it thematic. After witnessing the extinction of the whole dodo species, the audience watches icicles impale the film’s villain. Some children might get frightened. Not the ones who play video games.

Co-directors Chris Wedge and Carlos Saldanha made their picture under Blue Sky Animation and Twentieth Century Fox Animation. Their visuals have almost no capacity to make you forget you’re watching a cartoon. The animals appear over-stylized, so while Manny and Diego look relative to their species, Sid most closely resembles roadkill. And the humans, with their square noses and eyes much too far apart, look like warped museum figures come to morbid life. Using animation to convey unoriginal gags and hackneyed storylines, the filmmakers fail to grasp the limitless potential of their medium, and instead, they play every expected note without fail. The story never surprises you, it goes just where you expect it to, and then quickly ends before you realize how banal the whole experience was.

However warmly diverting Ice Age may be, the product never reaches beyond its Saturday morning cartoon stylization. The kitschy dialogue comes modernized with trendy lingo and potty humor, while the soundtrack pops with era-inappropriate tunes (then again, what music would be appropriate for this setting?). Clocking-in at 81-minutes, including end credits, this is barely a feature film. Subtract the two otherwise unrelated subplots about Scrat, by themselves potential short films, and the meat of the movie runs just over an hour. Perhaps the filmmakers were saving additional content for the sequel or Deleted Scenes portion of the DVD. Perhaps they ran out of jokes. Or perhaps there simply wasn’t enough here to justify a movie. Whatever the explanation, the result is harmless, if unnecessary.