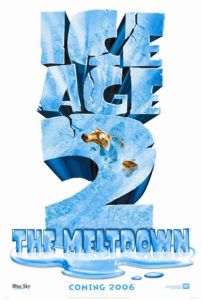 Ice Age: The Meltdown has the same underwhelming quality as the original, 2002’s Ice Age. Ultimately a retread of its predecessor, there’s more “crap” jokes, more gags about death on a massive scale, and plenty more pop-culture references, but none of the magic we’ve come to expect from an animated movie. When there’s competition from Disney and Pixar, everything else feels amateurish and pathetic, forcing us to wonder why these third-string productions even bother?

Only Scrat, the squirrel creature who’s like Wile E. Coyote if The Roadrunner was an acorn, manages to crack us up at all. Though, even he proves somewhat tiresome by the finale. In one of these sequels, maybe Scrat will order an Acme rocket to reach his acorn, or build some impossible mechanism that propels him high into a tree. Then again, are there trees in this movie’s Ice Age? We never see the Oak from which Scrat’s sole acorn fell, so perhaps not. That’s probably why his search is so basic and funny. Even so, as his twitchy, frustrating acorn chase proves chuckle-worthy, it’s surrounded by about 80-minutes of uninteresting and inconsistent filler.

Released by Blue Sky and Twentieth Century Fox’s animation studios, the movie takes place thousands of years ago but still manages to incorporate an embarrassing profusion of double entendres and hip humor. This is a dreadful experience that parents will undoubtedly suffer through while their children only comprehend the basics of the story. All the familiar characters return from the original with new-but-lackluster conflicts to overcome, including a melting of the glacier that threatens to drown them. Manny the mammoth (voice of Ray Romano) tackles his solitude, being the only remaining mammoth in the valley—until he meets Ellie (Queen Latifah), a female mammoth who believes she’s a possum. Diego the saber-toothed tiger (voice of Dennis Leary) conquers his fear of water. And Sid the sloth (voice of John Leguizamo) continues his reign of stupidity.

A shameless biblical parallel, the story teems with religious iconography that limits its potential audience. Consider how our animal friends migrate toward “a boat”—a conveniently shaped tree log doubling for Noah’s Ark, except without the captain. Or how, when a massive glacier splits, holy music fills your ears and recalls Moses’ spectacle at the Red Sea. And, of course, Scrat ends up in squirrel heaven, complete with pearly gates in the shape of acorn ornamentation. It’s all rather obvious and all rather sickening. And just think of the potentially elegant allegory to Global Warming—complete with melting glaciers and rising waters and dying species—squandered by this run-of-the-mill religious metaphor.

Suffering from the same troubles as Dreamworks’ Madagascar series, the Ice Age movies over-modernize their productions with hip lingo, base humor, nonsensical references, and structures it all around thin storytelling. Their few redeeming qualities reside inside characters that steal the show in their few moments of screen time: Madagascar has secret-agent-wannabe penguins; Ice Age has Scrat. If they charged full ticket price for the barely fifteen minutes these characters filled doing their own thing, the admission might be satisfying. But with all the other unnecessary fodder (i.e. the movie), even with a runtime barely breaking the 90-minute mark, the experience is hardly worth enduring.