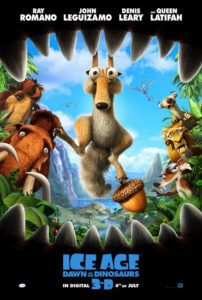 Here’s an animated movie franchise that realized on its third time around that its customary setting and characters were no longer interesting enough on their own. So they changed their formula, added new characters, displaced them from their usual backdrop, slapped a new subtitle on, and voila! Ice Age: Dawn of the Dinosaurs, a completely unnecessary sequel that’s so unbearably unimaginative, it feels like a tired obligation being fulfilled by begrudging talent to appease a studio’s need for sequel marketability.

Bookend scenes take place in the wintry Ice Age territory of the earlier movies, whereas throughout the middle, our talking animal friends find themselves lost in a tropical oasis containing extinct dinosaurs in a bubble surrounded by ice. It all begins when lispy sloth Sid (voice of John Leguizamo) finds dino-eggs and decides to play parent. An angry T-Rex mother eventually comes to reclaim her children and takes Sid with her, only because her hatchlings have since bonded with the sloth. And so, the entire herd of Sid’s mammalian reject friends tracks the dinosaur underground, where they find a preserved piece of prehistory and all its peril waiting for them.

Luckily, they have a mildly insane one-eyed weasel named Buck (voice of Simon Pegg) to guide them through Jurassic dangers, wherefrom everyone learns valuable-if-transparent lessons. Snuffleupagus-wannabe Manny (voice of Ray Romano) worries about his partner Ellie (voice of Queen Latifa), since their unborn child is anxiously exposed to velociraptors and rivers of lava. Diego the saber-toothed tiger (voice of Dennis Leary) frets over his loss of predatory prowess, and then comes alive once more protecting his friends from dinosaurs. And rambunctious possum duo Crash (voice of Seann William Scott) and Eddie (voice of Josh Peck) purvey plenty of potty humor. Meanwhile, the change of scenery provides some ample excitement beyond anything tried before in these otherwise dull movies, as the threat of being eaten by any number of creatures keeps the thrills coming.

By exchanging this series’ normal strain of scatological humor with jokes about barf, farts, and penises, the material feels needlessly gross. The usual influx of pop-culture references riddle the script, including a cell phone gag, and the song “Walk the Dinosaur” playing behind cutesy scenes with Sid’s non-children. (Get it? Because they are dinosaurs! It’s always clever when soundtrack lyrics mirror the events in a movie.) Most of the comedy falls flat, save for one sequence when the crew inhales noxious gasses and begins laughing maniacally about their impending doom. Alas, they survive, only to propel more bodily humor and make a nod to Alvin and the Chipmunks. Kiddies will enjoy the foolishness throughout, whereas adults should take a 90-minute power nap.

And then there’s the title, Ice Age: Dawn of the Dinosaurs, which makes about as much sense as Madagascar: Escape to Africa. But your itty bitty children could care less about the nonsensicality of these titles—they’re taken away by the bright colors and jerky animation of the characters, which pop in the movie’s much-advertised 3-D format. Now that the tri-dimensional gimmick has returned for another fifteen minutes, expect every third movie to be 3-D. There’s nothing that can be done to avoid it, unless you, the moviegoer, buy tickets for the optional 2-D showings and therein tell studios that wearing dorky glasses for a pop-up cartoon won’t sell you.

Even the sole-redeeming character, the desperate bad-luck rodent Scrat, feels overly contrived alongside his new (flying) squirrelly competition, and eventual lover. The once joyful simplicity of his acorn quest is replaced by a romantic tryst with a competing female, sporting blue eye-shadow no less, which is wholly unfunny and rather annoying. When the only worthwhile segment of the previous films is trimmed down to a nub and the basics of the franchise are altered to unrecognizable extremes, its time for the filmmakers to start pointing their creative energies elsewhere.