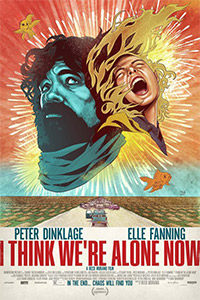 As an avid fan of the apocalyptic and post-apocalyptic genre, I had high hopes for this film. The story premise has promise, with critical themes that are often found in this genre. An occurrence—whether it be the spread of a disease, environmental disaster, irrational societal change, war, or the dead reanimating—wipes out a huge percentage of the human population or alters it to an extreme. Survivors are faced with finding food, supplies, shelter, weapons, cures for boredom, and vices to help them deal with—or to avoid dealing with—the psychological trauma of living in a new world filled with the memories of those they lost. There’s usually some drive to restore law and order and/or figure out how to beat or define whatever ended the world as we know it; this often involves seeking out other survivors. Sometimes you find other survivors, and they’re welcomed company. Sometimes they are terrible, dangerous psychos who have lost their shit (you avoid that kind).

Although Reed Morano’s I Think We’re Alone Now has many of these genre elements (massive loss of human life, finding supplies and purpose, dealing with trauma, finding or avoiding people), the story, character motivation therein, and the random twist ending left me annoyed and disappointed. Del (Peter Dinklage) seems to be the sole survivor of an apocalypse of some kind, which is never defined or even hinted at in the film, much to my frustration. People just died in a very sudden way; shots of people dead at the dining table or with the TV remote in their hand show this, as does dialogue that describes someone dying on an elliptical workout machine. Del hasn’t left his small town since the occurrence and spends his time looking for supplies, often batteries so he can still live with his pre-apocalypse comforts, such as movies and music. He cleans houses, disposing of dead bodies in a massive graveyard he created, tidies up, and brings past-due library books back to the local library where he now lives. One night, the sky is lit up by fireworks—some pretty cool, unexpected imagery, admittedly—and he knows he’s no longer alone. The next day he finds Grace (Elle Fanning) passed out in a car, which she has drunkenly crashed. She’s newly injured, but also has a strange scar on the back of her neck. Del helps her recoup but then wants to send her on her way—he seems to like his solitude and routine. Of course, Grace stays and helps Del with cleaning the houses, and he learns that he doesn’t actually like being alone.

Morano’s use of repetitive shot compositions to illustrate the monotony of loneliness and the tendency for humans to assign themselves tasks—to have a purpose—even when there’s no one else around, is effective for the story. When Grace comes into the picture, it’s jarring due to the break in repetition, but soon, she becomes part of the rhythm of daily life in Del’s small town. The use of natural light and battery-operated light sources makes sense for this type of story too, and Morano applies a hand-held camera technique with minimal stylization, lending a gritty feel. Reed wants his film to be realistic and natural to make the viewer feel like the scenario is plausible. And that’s part of what makes some of my favorite apocalyptic and post-apocalyptic books and movies great—the horror that the story is plausible. 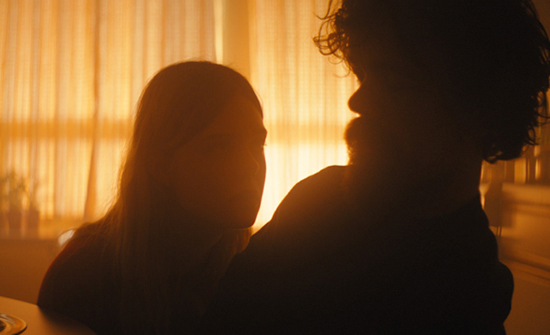 What is ridiculously implausible are some of the character motivations and the out-of-nowhere twist in the third act. Humans are naturally curious, and I don’t care how often you’ve been burned by other people or how much of a introvert you are—when the apocalypse happens, you want to find out what happened and if there are other people out there; in the spirit of self-preservation at least, you try to find out what caused the death of most, if not all, of humanity so that you don’t end up dead too. Or, if you’re seeking death due to the hopelessness of living as the lone human survivor on Earth, you at least want to be pretty sure that you are truly alone before offing yourself. You look for other people, even if you keep your distance at first to assess where they’re at on the good survivor/bad survivor spectrum. Del doesn’t do any of this. Though, he has established a nifty shelter setup at the library, and he’s always on the lookout for stuff that will come in handy. But why is he cleaning up the bodies and homes of the deceased? If it’s fear of disease from dead bodies laying around, wouldn’t he also want to figure out how he can avoid whatever it was that killed all these people? Or is he preparing the homes for people to live in again someday? In which case, wouldn’t he want to find out if there are any people left?

I understand being a creature of habit and not trusting other people, so when Grace comes to town, Del’s reaction isn’t entirely unreasonable, but he also barely asks her any questions about where she came from or what information she might have about what caused humanity’s current predicament. Not pressing her turns out to be a pretty big mistake, as her “parents,” Patrick (Paul Giamatti) and Violet (Charlotte Gainsbourg), show up. The ordinarily talkative, funny Grace is now silent and afraid in the presence of Patrick, who is intimidating in his phony concern over his supposed daughter and his insistence that Del should join them back at their settlement in Palm Springs, which has a community of thousands of people. Violet tiptoes around like an abused spouse. Del feels betrayed because Grace said her parents were dead, and she explains that she was assigned to them as their daughter against her will. Del lets Patrick and Violet take her anyway, but eventually, he follows to save Grace.

And now for the twist. Patrick is a doctor who has developed a method to delete people’s memories of the past to end their suffering. Their community is modeled after a typical suburban development with people jogging, mowing lawns, playing golf and generally acting like everything is fine and dandy. While some of these residents might have opted-in for the treatment voluntarily, it’s clearly forced on some people—to what purpose, I do not know, and the film doesn’t explain it. This is the direction society decided to go—pouring resources into technology to make people forget. Aren’t there more important endeavors resources should be going to for requirements of human life? Like preventative measures to stop whatever happened from happening again? Ways to develop renewable energy sources? Tools for hunting and growing food? Maintaining sanitation systems and preserving clean drinking water? Nope. Brain scramble memory deleter is the ticket to save humanity!

It’s stupid, and the only thing that could even mildly be considered a clue is the two brief shots of Grace’s scar, which doesn’t really tell the viewer anything. If you’re going to have a twist like that, you need to clearly establish plausible reasons why people had to have their memories deleted in order to survive. And you should also have some breadcrumbs earlier in the story to connect the rest of the film to that reasoning.

I Think We’re Alone Now has some good acting, and the relationship that grows between Del and Grace is interesting. There are some funny moments mixed in too—when Del is teaching Grace how to clean houses, he tells her that searching for batteries is essential: “Batteries are the best commodity the dead have to offer,” he says. Grace responds with “The necrophiliac in me begs to differ.” But overall, fans of the post-apocalyptic genre, like me, will be annoyed with the illogical ending, implausible character behavior, and lazy world development. Other viewers will just be left scratching their heads, wondering what the hell just happened and why.