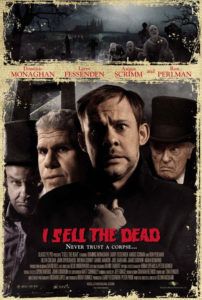 Filled with nods to those 1950s and ’60s-era horror yarns released by Hammer Film Productions, I Sell the Dead contains enough enthusiasm to rouse distanced admiration, but it doesn’t have the chops to back up its purpose. Meant as a horror-comedy of sorts, the extremely low-budget production should have chummy camp value written all over it, except none of it works the way it should. It’s not particularly funny or scary, and doesn’t provide much of a good time. And while understanding what the filmmakers were going for, this critic just wasn’t interested.

Hammer horror pictures usually took place in Victorian England and had gothic airs all about them. Most starred Peter Cushing and Christopher Lee, and revamped, if you will, classic monster tales dominated by Universal Pictures in the 1930s. Grave treatments filled with blood and dramatic lighting made titles like 1957’s The Curse of Frankenstein and 1958’s Dracula staples of serious horror. In this tradition, writer-director Glenn McQuaid teamed with producer Larry Fessenden, himself a horror filmmaker (see The Last Winter), and set out to make a dark homage B-movie that fails in almost every respect to honor their inspiration.

Made for comic lampoonery, this episodic pastiche begins with slimy graverobber Willie Grimes (Fessenden) being beheaded for murder. That evening, Grimes’ partner, Arthur Blake (Dominic Monaghan), who’s set for the guillotine the next morning, tells his story to an occult-obsessed priest, Father Duffy (Ron Perlman). Monaghan doesn’t look the part, his hair still rock ‘n’ roll raggedy from the set of Lost (filming took place while Monaghan was still on the show). And Perlman’s otherwise impressive range can’t save his role from falling into the realm of cartoonish. But that’s okay, since the whole movie would prefer to be a feature-length episode of Scooby-Doo anyway.

Blake tells Father Duffy about his exhuming bodies in the night and selling them to a mad doctor, how he found all manner of creatures and curses in the ground during his lifetime of graverobbing. These scenes take place on campy sets and the fog machine on high, while the foregrounds contain silly monster makeup effects that try much too hard to reach that level between comedy and horror. One moment worth mentioning: Blake and Grimes come upon a female corpse with a stake in its heart. They pull out the stake, and the undead creature awakens to suck blood. They quickly put the stake back in, and she’s dead again. Then, they both have a good laugh repeatedly pulling out the stake and replacing it, watching her convulse to life and fall back to death in a moment of horror slapstick.

The whole production reeks of Abbot and Costello Meet Frankenstein, except what’s supposed to funny barely stirs a chuckle, and the scares couldn’t frighten a child. Shouldn’t a campy horror-comedy about graverobbing, vampires, zombies, and other monstrosities be more than mildly entertaining? Instead, the antic-ridden I Sell the Dead is bound to bore even the most committed genre fans, making us roll our eyes and wait in vain for it to get good. It never does. Maybe it would make a good television series, like Tales from the Crypt, every week telling a new outlandish graverobbing story, some funny, some scary. Maybe put it on Showtime or HBO for some R-rated horror exploits. But here, in their limited timeframe, the filmmakers care more about presenting a monster showcase than telling a story. Best left to IFC’s video-on-demand release, there’s certainly no marketing this lowbrow chiller to a theatergoing audience.