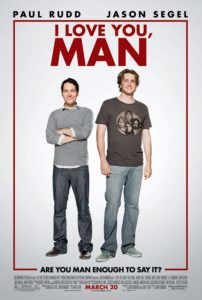 Little can be said about how men develop friendships with each other. At least not by me. Indeed, male bonding is as much a mystery to me as what women talk about when men aren’t around. I’ll never understand what’s so engaging about shouting at football, playing drinking games, and the pleasure taken from eighteen holes of golf. Both genders have their obscure habits, I suppose, and contrary to popular belief, men keep their inner sanctum as private as women do theirs.

I Love You, Man considers the prospect of seeking out a same-sex best friend, and all the awkwardness such a venture entails. It involves a character I can wholeheartedly relate to: Peter Klaven (Paul Rudd), who has never had a male best friend—he just goes from girlfriend to girlfriend. His concentration has always been building the best female relationships he can. He sees the appeal of “chick flicks” and the bliss in an evening of HBO programming shared with his fiancée Zooey (Rashida Jones). But somewhere inside him there’s a male side, who rocks-out to Rush and enjoys getting smashed while woofing-down fish tacos.

After proposing, Peter overhears Zooey’s friends talking about him; they suggest he’s weird for his lack of male friendships. At the very least, it will be a lopsided wedding party if he doesn’t name his best man. Just keeping up with cool guy vernacular provides him enough of a challenge. So Peter turns to his homosexual brother Robby (Andy Samberg), who knows men better than they know themselves, for advice. Robby suggests setting up a “man date” of sorts, which involves no dinner, just drinks or “aps” and plenty of manly talk. During one rendezvous, Peter fails at replicating hip lingo and tries to be funny with various accents, all of which sound like a leprechaun. Needless to say his “dates” do not go well. Ironically, Peter’s problem is the same as it would be while trying to pick up a woman: He’s trying too hard.

Enter Sydney Fife (Jason Segel, from Forgetting Sarah Marshall), the impossibly cool slacker who Peter meets at random and instantly befriends. Syndey is the honest type, blatantly dropping truths about himself that social graces normally frown upon discussing. What he has to say might offend you at first, but deep down, you know it to be true. He lives in a small house, but spends his time in a garage decked out with several televisions, drums and guitars, and even a “masturbation station” (don’t ask). It’s a grown-up equivalent to a treehouse or a fort made with blankets draped over chairs, and women aren’t allowed. Syndey is a perfect match for Peter, who’s in desperate need of some male self-understanding.

What makes this film exceptional is its accurate depiction of the sometimes cliquey nature of male friendships. Certain groups don’t like outsiders, such as Zooey’s friend’s husband, played by Jon Favreau—his character can’t stand Peter and doesn’t want him anywhere near his weekly poker game. And certainly women will never understand the admittedly weird nature of two male friends, how they’ll lip-sync their favorite rock song one inch from each others’ faces, but otherwise do everything to avoid homoerotic activities.

Rudd fills his role with appropriate unease, as he desperately attempts to assimilate while at the same time embarrassing himself. The actor is something of a robot, since he’s miraculously retained his boyish looks since Clueless fifteen years ago. At this rate, the Role Models star will be playing thirtysomethings well into his eighties. But the real star of the film is Segel, whose geniality will make every male moviegoer wish their best friend was half as fun. How many of us would take on Lou Ferrigno to defend our BFF’s honor? Not many. And that, dear readers, is the test of true friendship.

Co-writer John Hamburg (Along Came Polly) directs the film with all the raunch and sex talk we’ve come to expect from R-rated comedies nowadays, yet he simultaneously instills plenty of (unexpected) heart and romantic truth. An easy and early contender for best comedy of 2009, the result is guilt-free, constantly hilarious, and most importantly, relatable. Without relying on shock humor or topless babes to propel the laughs, I Love You, Man administers a welcomed sense of authenticity that will keep you reflecting on its appeal long after leaving the theater.