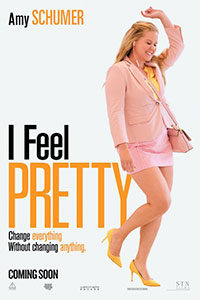 In I Feel Pretty, Amy Schumer plays Renee Bennett, a New Yorker with low self-esteem who works for a posh fashion company called Lily LeClaire. Seeing herself as comparatively frumpy next to models her company usually hires, Renee, who works in the lowly IT department, aspires to advance to a position in the head office under the chic Avery LeClaire (Michelle Williams), the breathy and squeaky-voiced CEO of the company. When Renee bumps her head at a SoulCycle, she wakes up to find that she looks like one of the models she so envies. Unlike the change in Big (1988), referenced here, she hasn’t changed physically, as the viewer and Renee’s friends (Aidy Bryant, Busy Philipps) can see. But she thinks she suddenly looks gorgeous and begins to behave with an assurance and fearlessness that she’s always sought. She finally gets the job she wanted, meets a nice fella (Rory Scovel), and even becomes conceited as a result of her new self-perception. The enduring joke is that nothing about Renee has changed except her confidence, and the film gets a lot of unfortunate mileage out of this joke by suggesting her confidence is misplaced.

Here’s the problem: writer-directors Abby Kohn and Marc Silverstein, best known for Never Been Kissed (1999) and He’s Just Not That Into You (2009), suggest that Renee’s confidence is boosted by an alteration to her self-image. She feels pretty because she thinks she looks pretty. But the film also makes a clear distinction between what it believes pretty looks like and what feeling pretty looks like. After Renee first hits her head, she looks at her “new” body, which the audience never sees, but she describes what she sees. Her descriptions, along with the omnipresent supermodels cast throughout, tell the viewer what a beautiful woman looks like: A hard stomach, toned arms and legs, a sharp jawline, and large breasts. The implication is that anyone who doesn’t look this way isn’t socially accepted as pretty. But through the course of the film, the lesson is that even though supermodels remain the idealized conception of how our culture values female beauty, everyone is special in their own way. The film’s message offers the equivalent of a participation award, suggesting that beauty comes from within, while it never suggests that someone with Schumer’s physique is naturally pretty.

This achingly, frustratingly out of touch setup leads to misguided humor and, frankly, saddening moments that are played for laughs. The punchline of nearly every subsequent joke leads to the resolution: Isn’t it funny that the chubby girl thinks she’s sexy? On a date with her boyfriend, Renee joins a bikini contest, and her confidence proves so amusing to the audience that they laugh and cheer, though she doesn’t win. When she makes love for the first time with her new beau, he keeps trying to shut the light off because, as he implies, shouldn’t a person like her want to make love in the dark? Again and again, the film reinforces the idea that her body isn’t beautiful, turning Schumer’s physical presence itself into a source of humor. Whereas Schumer’s ironic, committed delivery of the joke occasionally provides some laughs, the message behind it remains rather detestable and, for someone with body image issues (meaning everyone), kind of a downer.

If all that wasn’t enough, I Feel Pretty has a blatant string of product placements to assault the viewer with the production’s sponsors, apparently Target superstores. During a Lily LeClaire branding meeting, the company’s vapid models-for-execs discuss, with blank and sneering expressions, how to introduce their new “Diffusion” line, designed for the “regular girls” who can’t afford high-end prices, into Target retailers. Throughout the comedy, Target is mentioned dozens of times, both in reference to the launch of the company’s new products and in random exchanges. Schumer, the otherwise edgy stand-up and sketch-comedy star, must suffer through a scene where she approaches one of the film’s many models on the street and says, “Hey, nice dress!” The model replies, “Thanks, I got it at Target!” Inevitably, the plot remains entangled in whether Avery and Renee can convince Target executives to buy their new products. The climactic scene of the film, where Renee finally realizes that she just needs to have the confidence to feel pretty, unfolds at a fashion show for Lily LeClaire’s Target products.

At nearly two hours, Kohn and Silverstein deliver a dragging, overlong comedy that should have been about confidence and, in some ways, tries to be. A subplot about Avery overcoming her insecurities about her high-pitched voice infers that even beautiful people have self-esteem issues, which again supports the film’s notion of what pretty women should look like. I Feel Pretty tells people in the “other” category to feel confident because, after all, everyone has something they’re insecure about. If nothing else, Schumer has already demonstrated with Trainwreck (2015) and her comedy specials that she’s sexy, even though she may not look like the fashion world’s notion of beauty, perpetuated in a complete cultural saturation of model archetypes through ads, productions, and other vitriol. I Feel Pretty tries to embolden ideas of confidence and inner beauty, while at the same time making people feel terrible about their physical state. It’s hard to imagine a more confused or flawed execution of a well-meaning message, except maybe Shallow Hal (2001).