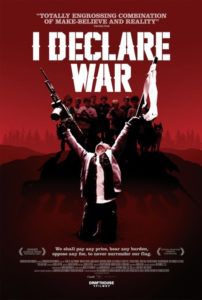 Somewhere between the playful war fantasies intrinsic to boyhood imagination and pure surrealism resides I Declare War, a fascinating look into an intense game of capture-the-flag had by a group of boys, and one girl, during a hot summer afternoon in the forest. Co-directors Jason Lapeyre and Robert Wilson combine elements from Lord of the Flies and, for a more recent reference, Son of Rambow in a film that volleys feelings of delight and dread. It all seems innocent enough, the filmmakers intermittently replacing the youngsters’ use of sticks as faux guns with actual military weaponry as their imaginations take over, thus allowing segments of the film to play out like a gritty Vietnam War story by way of preteens. What’s so compelling about the material is how we become involved in the conflict, which gradually becomes very real, and the way it builds some very distinct individual personalities.

Cocksure war “strategy” enthusiast PK Sullivan (Gage Munroe, behind braces and scruffy hair) leads a devoted clan of boys whose team has never lost a game of war. Displayed in their wooden tree fort are the flags captured from battles past. PK’s soldiers earn a special reward for winning today’s battle: going over to PK’s afterward and watching Patton. “Again?” one of them asks PK, who cites military history and Napoleon quotes to his blank-faced troops. Despite his numerous wins against a slew of inexpert adversaries, PK looks forward to today’s game, as it’s against a worthy opponent: the clean-cut Quinn (Aidan Gouveia), who’s just as versed in war strategies as PK. But the day’s battle of wits turns into impassioned combat when Quinn’s right-hand—the sweaty loose cannon Skinner (Michael Friend)—stages a coup and takes over Quinn’s army.

Not to worry, terms like “combat” and “coup” shouldn’t be taken literally, even if Lapeyre and Wilson have resolved to show the kids carrying actual firearms more often than the sticks and slingshots they’re really carrying. As for safety, the children’s game has strict, mostly nonviolent rules: the boys fire verbal rounds of “bang, bang” at each other, and when hit, the victim must fall to the ground and count to ten; someone only “dies” when an opponent hits them with a “grenade”—a water balloon filled with fake blood. However, Skinner, who has a personal bone to pick with PK, begins to abuse the rules when he takes a hostage, Kwon (Siam Yu), PK’s best friend. Skinner delivers nasty kicks and punches, and soon tortures the smaller Kwon, escalating the tension as the filmmakers cut away to PK, who seems more concerned about the promise of “winning” than saving his comrade. And when faced with a choice of victory or saving his friend, PK’s decision becomes a dramatic, shocking one.

Although the directors (thankfully) avoid showing children with imagined bullet wounds via real squibs, they take us into the minds of the children to explore the power of their imagination, with results varying from comic to disturbing. Guns fire Hollywood rounds, and explosions set off impressive, dreamt-up pyrotechnics, and the results give I Declare War the feeling of a tamed version of Platoon. But then, the film also explores a child’s imagination outside of this war game. Take Joker (Spencer Howes), a ginger-haired bully who periodically loses himself in his own laser-eyed fantasy; his rage turns into red optic zaps, much to the chagrin of squirrels and those who annoy him. Likewise, the girl Jess (Mackenzie Munro) daydreams about confessing her love to Quinn, who went home earlier in the day. Having grown up faster than her fellow soldiers, Jess realizes she doesn’t need her crossbow—she can use her feminine wiles on the susceptible boys to a much more damaging effect.

Incredibly, Lapeyre’s script involves us in this innocent game during even its more infantile moments but especially when Skinner elevates the conflict to uncomfortable, worrying extremes. Still, there’s always a layer of amusing charm behind it all, from PK’s ever-serious devotion to strategy to moments when Joker breaks the tension by asking hilariously grotesque “Would you rather…” questions. Surprising are the levels of alternating suspense and comic escapism offered, as are the dramatic punch of the climax and the genuinely unsettling performance by Friend (Skinner will keep his school counselors busy). The ensemble of rascal actors is uniformly strong, especially Alex Cardillo as Frost, a talkative boy crushing hard on Jess. Perhaps the best quality about I Declare War is that it remains enclosed within the forest and the limitless possibilities therein, never interrupting the gameplay with anything too real, so in the end, everyone can go home to play videogames, eat pizza, or watch Patton.