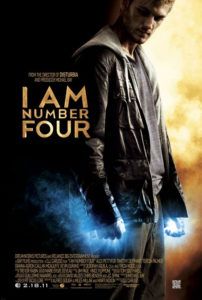 roduced by Michael Bay and written by oft-suspect author Pittacus Lore, I Am Number Four plays like a combination of Teen Wolf and Superman, with a little Twilight thrown in for good measure. While establishing its involved alien mythology and backstory, director D.J. Caruso orchestrates a cast of teenagers to set up your basic high school melodrama, turning a large scale sci-fi scenario into a run-of-the-mill teen sitcom. Aimed at the “young adult” crowd, the film’s PG-13 rating comes with surprisingly gory moments and special FX-laden shootouts, but there’s also plenty of predictable humor embedded into the dual save-the-universe and forbidden-teen-love storylines to make it a crowd-pleaser. The same tween audiences that enjoy this fantastical combination of clichés in Stephenie Meyer’s material should find themselves in bliss here.

The story begins with the teenaged alien warrior-to-be, Number Four (Alex Pettyfer, from Tormented), and his bodyguard, Henri (Timothy Olyphant), hiding among the human population. Their home planet was devastated by a cruel race called Mogadorians, a bald, tattoo-headed, sharp-toothed bunch of goons that look like a cross between the aliens from Alien Nation and the vampires from 30 Days of Night. Nine special children, called Loriens, with superhero powers, called Legacies, were saved from their planet to join forces and stop the “Mog” invasion, though first they have to survive not only small-scale “Mog” attacks, but adolescence. The bad guys have plans to hunt down the Loriens, who are interspersed throughout Earth, and execute them one by one. The prologue shows the execution of Number Three, bringing them to Number Four. Apparently, whatever happened to Number One and Two wasn’t that interesting; the movie doesn’t show us their fates.

Constantly on the move, Number Four and Henri find a temporary new home in Paradise, Ohio, a hackneyed sampling of Small Town, America. They’re joined, seemingly at random, by a gecko that morphs into a shamelessly adorable Beagle puppy. At first, the audience questions the shape-shifting puppy’s intentions, but then we realize, of course, that the puppy serves as the hero’s guard dog and cute sidekick (says the audience throughout: “Awww!”). Despite being hunted, Number Four wants to attend the local high school, where, though instructed to lay low, he picks a fight with a rowdy gang of football jocks and manages to win the heart of the quarterback’s best girl, Sarah (Dianna Agron), a would-be photographer—all on his first day of class. While earning himself far too much unwanted attention, Number Four tests his newly developing powers, including flashlight-like palms, hyper-agility, and telekinesis.

Caruso renders the action scenes with clarity, despite the prevalence of substandard CGI used to swirl poofy blue energy and alien ashes about onscreen. He struggles, however, with those clumsy scenes of rural quaintness shaped by 1980s movie formula (Did the cinema really need another scene with football bullies picking on a science geek in the hallway?). Caruso is best known for pilfering Hitchcock classics without giving due credit: He made the Rear Window rehash Disturbia (which was sued for its plagiaristic qualities) and the wrong-man thriller Eagle Eye in which he echoed North by Northwest. Here, there’s not much directorial style given to the film, unless you count the loud, Michael Bay-esque presentation. Perhaps Caruso’s earlier displays of stylistic virtuosity were only in emulation of Hitchcock; on his own, there doesn’t seem to be any style at all, unless ‘like Dawson’s Creek with aliens’ is a style.

Aside from its familiar storyline, I Am Number Four provides easy entertainment for audiences too lazy to care that they’re being fed a recycled formula. Production values are high and the thinly described characters inhabit common enough archetypes so we know them without really knowing them. Pettyfer (who looks like he should be modeling underwear) proves he can read a script, Olyphant (the film’s only saving grace) disappears far too early, and Number Four’s dorky teen sidekick Sam (Callan McAuliffe) delivers the occasional laugh. Yet, they’re all out-acted by the cuteness of a puppy. There’s simply nothing exceptional about the film, which becomes a problem when its foundation comes almost exclusively from established pop-culture material. Nevertheless, expect audiences to flock toward this “safe” material and earn Bay’s production company millions, thus confirming that the ending’s hint at future sequels wasn’t just an empty promise.