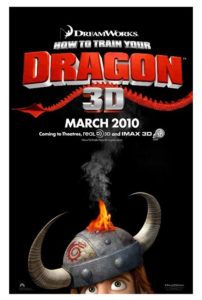 The surprising amount of tenderness at the center of Dreamworks Animation’s new 3-D feature, How to Train Your Dragon, is enough to forgive that, like most of the studio’s releases, the movie tries much too hard to be hip and cool. Sure, there are obligatory loud, action-packed scenes at the beginning and the end to help remind you why you paid extra for a third dimension (if indeed you did—the studio insisted that theater chains offer both 3-D and 2-D screenings). And there are thinly veiled pop-culture hints embedded into the character designs. But all of those usual downfalls of a Dreamworks animated movie are outweighed by the emotional impact of the story and the admittedly superb animation.

Based on the book by Cressida Cowell, this adventurous and heartwarming tale takes place in Viking times, on an isle known as Berk. There a young Viking, named Hiccup (voice of Jay Baruchel), has trouble fitting in. Perhaps it’s because he doesn’t have a Scottish accent like the adults in the village. Then again, none of the other young characters do either. Maybe the filmmakers are reminding children in the audience who they’re supposed to relate to. Anyway, Hiccup prefers to study and invent, whereas the brash inhabitants of his village have only one thing on their minds: killing dragons. The winged monsters come in the night to burn down Viking homes and feed on livestock. Hiccup’s father (Gerard Butler), the town’s leader, expresses disappointment in his son’s cowardly, gawky disposition and lack of physical prowess. Meanwhile, Hiccup wants desperately to fit in, though he would like to avoid that whole violence thing.

During a dragon raid, Hiccup uses one of his inventions to bag himself the elusive Night Fury, a jet-black dragon that has never been seen by his people. The Night Fury crash lands far in the distance, and when Hiccup finds it, he can’t bring himself to kill the beast. He sets it free and finds its unable to fly because of an injured tail. Very quickly the dragon, which Hiccup names “Toothless” because it has retracting teeth, turns into an expressive, puppy-like animal that’s both lovable and fierce. Hiccup outfits his new pet with a brace to fix its tail, and soon they’re off. These scenes of bonding are the best in the movie, particularly when Hiccup and Toothless inevitably take to the skies. What we get is a Black Stallion scenario where the boy and the wild animal bond, and then become best of friends. Of course, through the course of the story, they help teach the Vikings tolerance for the misunderstood dragon race, proving that even Vikings have hearts.

The animation stands as the best in Dreamworks’ hit-and-miss (more often miss) track record. So much of the relationship between Hiccup and Toothless is communicated without words, as the animators have done a wonderful job of making a speechless dragon into a tangible character. The human characters may be over-stylized, and the Viking beards may look like yarn, but the scenery is beautiful. Roger Deakins, the cinematographer on Revolutionary Road and nearly the entire oeuvre of the Coen Brothers, acted as a visual consultant to directors Dean DeBlois and Chris Sanders (who also directed Disney’s Lilo & Stitch together). The resulting effect is an impressive sense of atmosphere on landscapes and awe-inspiring tangibility throughout—and that’s without the needless 3-D gimmick.

Yet, this is still a Dreamworks animated movie, and with that, an audience must expect less than something by Pixar or even Disney. The story and lessons in How to Train Your Dragon are predictable and familiar (and suspiciously similar to Avatar), with Hiccup going against his war-mongering people to instead defend the dragon population. And Hiccup’s dreadful gang of classmates (voiced by America Ferrera, Jonah Hill, and Christopher Mintz-Plasse among others), with their modern slang and too-cool-for-school lingo, all feel pulled from a more contemporary story and transported here to cater to younger viewers. Even Hiccup feels suspiciously like Baruchel’s dorky character in She’s Out of My League. But when it’s all over, the movie’s strengths—the impressive visuals, the neat dragon designs, the central boy-and-his-dog relationship—are what remain and make it worth your time.