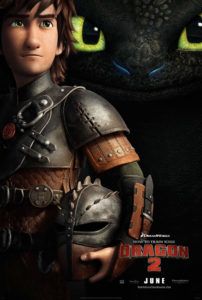 Perhaps the sole franchise in DreamWorks Animation’s arsenal that has the potential staying power of something like Harry Potter’s monumental run at Warner Bros., 2010’s How to Train Your Dragon had all the makings of a promising start. How to Train Your Dragon 2 realizes its predecessor’s full possibilities and improves upon it in almost every way, from the quality of the animation to the complexity of the storytelling. This continuation of Cressida Cowell’s book series is less devoted to adapting the source material than using it as a launching pad; in effect, writer-director Dean DeBlois has infused elements from various proven sources outside of Cowell’s framework. Whereas the original was essentially a coming-of-age tale involving “a-boy-and-his-dog” and a community setting aside its ignorance and misapprehensions toward dragons, the sequel deepens the series’ dragon mythology through war, obsessions with power, rivaling kingdoms, and ecological unity. The influence of everything from Avatar and Game of Thrones, to some of the more harrowing and fateful plot developments hashed out in The Empire Strikes Back, is felt in DeBlois’ script.

Cowell’s world is reintroduced via voiceover in the prologue, and sent off in an epilogue, by unnecessary bookends that feel tacked-on and dumbed-down for young viewers. This may represent the film’s only notable misstep. Jay Baruchel returns to voice the late-blooming Hiccup, who still sounds like a preteen although five years have passed since the original. Hiccup now appears with some teen stubble, a squarer jaw, and a more heroic stance—he’s clearly done some growing up between films. Those who count themselves among the audience for Cartoon Network’s DreamWorks Dragons (this critic isn’t among them), an animated series that serves to bridge the two films in the franchise over two seasons, will know for sure. The opening scene features Hiccup’s love interest Astrid (America Ferrera) and friends Snotlout (Jonah Hill), Fishlegs (Christopher Mintz-Plasse), Tuffnutt (T.J. Miller) and twin sister Ruffnut (Kristen Wiig), playing in the Dragon Games, this franchise’s answer to Quiddich, where youngsters zip around on dragons and drop indifferent sheep into baskets.

As usual, Hiccup is off on his own, exploring the skies and geography with his trusty fire-spitting dragon Toothless. Hiccup’s father, Stoick (Gerard Butler), has asked Hiccup to succeed him as the next chief of Berk, except the boy doesn’t want the responsibility. But before long, he doesn’t have a choice. Drago Bludvist (Djimon Hounsou), a tyrannical baddie bent on world domination, intends to gain control of all dragons and rule all humans. Hiccup wants to reason with Drago and, in searching for him, stumbles upon the dragon-sympathetic Valka (Cate Blanchett), who owns a tropical dragon sanctuary hidden in her very own Fortress of Solitude, an elaborate ice structure made and protected by her colossal Bewilderbeast, the ice-breathing “king of all dragons”. Beyond representing another dragon-whisperer of sorts, Valka is a kindred spirit for Hiccup in more ways than one. Meanwhile, to build his army, Drago has enlisted a dragon trapper, Eret (Kit Harington), a roguish, swashbuckling anti-hero whose muscles present a funny subplot as Ruffnut pines after them.

For Hiccup, the film’s coming-to-leader arc reaches a predictable head in the climactic battle, but along the way some dramatic gravity, by way of an unexpected death, unleashes an emotional bombshell in the plotting and increases the stakes of the series. To be sure, there’s peril abound in this sequel, beginning with a death inadvertently caused by Toothless and followed by a seemingly impossible victory. The stakes are undeniably higher this time around, with not one but two massive dragons at the center of a battle at which the human characters can do little else but watch the two giants face off. But more significant is the presence of a villain, which the original film lacked. And though he’s devoid of dimension, Drago is effective as a device of pure evil for humans and dragons alike to rally against. What’s more, the animal behavior of dragons is expanded, leaving just enough about their existence and hidden talents a mystery.

Not all of the dragons are as interesting as the Bewilderbeasts or Toothless, however; some of them are interchangeable and unmemorable, regardless of their varied shapes, colors, and sizes. Toothless remains the film’s prime source of visual joy in the way animators have imbued him with a personality that comes out in the background of scenes with humans talking. Playfully sly as a cat, wide-eyed and loyal as a puppy, and later ferocious as a lion, Toothless has a distinct personality. Valka’s cat-eyed dragon also has more facial distinctions than most. Overall, DreamWorks’ animation team has outdone themselves, rendering photo-real landscapes and ice formations, as well as a pointed concentration on visual atmosphere and air textures. Fire and water also look incredible. As usual, DreamWorks’ character design is their weakest and most cartoonish feature, but they’ve made great leaps in giving their characters visual depth and presence, especially in terms of skin and hair.

The film’s increased complexity in its storytelling already has parallels to the Harry Potter series, in that the target audience from the first entry to the second has gone from 10-and-under to early teens. If the age-to-story correlation continues on its current trajectory, perhaps darker days are ahead for Hiccup and the people of Berk; that will certainly be the case if DreamWorks intends to hold the interest of young adults. But amid the stellar improvements made in the sequel, How to Train Your Dragon 2 doesn’t hint at any specific, larger destiny for Hiccup aside from becoming village leader. Where will he lead Berk beyond the already-established coexistence between human and dragon? Though no answer to these questions is offered, the sequel at least emphasizes the possibility of more intricate stories to come. But, being at once a self-contained story and a continuation of a franchise that betters and grows more intricate than what came before, the film meets all the requirements of a great sequel.