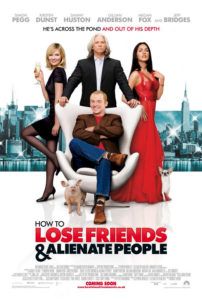 Simon Pegg could do just about anything and make it funny. Some actors are like that—they have a quality that makes them hilarious no matter what. Bill Murray’s aloofness always brings a smile. Jerry Lewis had that quality in his youth. There are others. Whether Pegg is fighting off zombies, playing supercop, or replacing all the lyrics to a patriotic American song with “England,” he’s incorrigible, likable, and always animated. Even in the most mediocre movie, Pegg will prove comical.

Luckily, How to Lose Friends & Alienate People isn’t a mediocre movie; it’s surprisingly clever entertainment that pokes fun at celebrity reporting in a romantic comedy, pseudo-biographical, but barely factual approach. Pegg plays Sidney Young, his character a thin mask for real-life figure Toby Young, the British journalist who organized the short-lived magazine Modern Review that boasted the motto “low culture for highbrows.” He was hired by Vanity Fair in the mid-1990s and caused quite a ruckus, because he despised the celebrities he was hired to drool over. The film was adapted from Young’s autobiographical book.

After his independent publication tanks, Young receives a call from New York City bigwig Clayton Harding (Jeff Bridges), editor of the (faux) mag Sharps. Young arrives on his first day wearing a t-shirt that reads “Young, Dumb, and Full of Come,” and based on first impressions, his shirt’s description is quite accurate. Harding says he’d like Young to spice up their otherwise typical publication, but at every turn, the impetuous writer’s ideas are rejected, his crude mannerisms laughed at, and his conduct labeled unprofessional. Then again, after young gives his boss a strip-o-gram on “Bring Your Daughter to Work Day,” little can be said to defend his professionalism.

Unwilling to play the game, Young affronts celebrities and their various reps when he should be kissing their asses. The shrewd publicist (Gillian Anderson) of burgeoning superstar Sophie Maes (Megan Fox) tells Young that if he cooperates and gives her copy approval, Young might catch some of her clients’ “starlight.” Young laughs that one off, giving her a look like “Did you just say ‘starlight’?” His chief concerns are getting Sophie into bed and making a name for himself. He can’t believe how his coworkers, the snide Lawrence (Danny Huston) and the charming Alison (Kirsten Dunst), accept such humiliation. As he says, he’s there to shake thing up.

But don’t be fooled by Young’s piggish façade. Educated at Cambridge, Harvard, and Oxford, he comes from prime stock. His baron father is a world-renowned intellectual, and so Young could take the title “The Honorable” but he chooses not to. Young is honest about himself, his impulses, and his desires. And he knows that titles and false dignity and social stations are illusions. Of course, it takes him most of the movie’s running time to realize this and determine he’s fallen for Alison, but most rom-coms feature someone not realizing they’re in love until the last moment.

Something about Pegg’s onscreen persona, the look of him and his British-ness combined, render him absolutely immune to fault. Behavior that would normally turn the audience’s sympathy away from a character is shrugged off because of Pegg’s odd appeal. No matter if his character wakes up next to a transvestite, kills a dog, or coughs up half a sandwich on an executive, Pegg’s Young remains an agreeable chap, which is actually sort of strange upon reflection. Formerly of Spaced fame, Pegg has grown into a prime comedy star after Shaun of the Dead and Hot Fuzz became cult hits in the States. If he continues to making movies like this one, he’s well on his way to superstardom.

Having helmed dozens of episodes for Larry David’s HBO series Curb Your Enthusiasm, director Robert B. Weide takes an effortless step up to film for equally smart, frank, and riotously funny material. Pegg cuts out a path for his costars to follow, and Weide guides them through, keeping the film’s tone reputable. Never winking at the audience or themselves, comedies like this are rare for offering tangible characters we care about and comedy that affixes some significance to our periodic need for base humor.