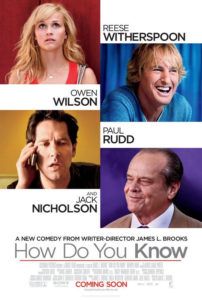 James L. Brooks makes good movies; they’re just not as good as he used to be. Mastering tearjearkers and adult dramas in the previous decades, recent efforts by the director of Terms of Endearment, Broadcast News, and As Good as it Gets feel emotionally flat in comparison to those heart-filled classics. Consider his latest film, How Do You Know, which examines a sort of love triangle wherein, as the title suggests, none of the parties involved know exactly how they feel or how to express themselves. It’s a serviceable, low-key romantic comedy that’s just entertaining enough to keep our attention, but with few flourishes to last in our memory the way Brooks’ movies usually do.

Entangled in their roundabout way, Lisa (Reese Witherspoon) is a thirtysomething pro softball player on the verge of a major life crisis, Washington Nationals pitcher Matty (Owen Wilson) is a confirmed womanizer, and George (Paul Rudd) faces a federal indictment that may be a result of his father (Jack Nicholson). After being cut from her team, Lisa wallows in emotional limbo and dates Matty for his uncomplicated, diverting charm, no matter how opposed she is to being treated like one choice from assembly line of women. Matty thinks Lisa is The One but has trouble giving up his philandering ways and articulating to her just how he feels. Meanwhile, she sits through a silent but meaningful blind date with George, wherein he falls for her, but she redirects him into the ever-dreadful “just friends” category. As the story proceeds, Matty’s behavior weighs on Lisa, and George musters up the courage to tell Lisa how he feels.

At nearly two hours, the movie feels much longer, perhaps due to the excess of subplots that needlessly complicate the story. Far too much time is spent with George’s pregnant assistant, Annie (Kathryn Hahn), a relationship that seems overly intimate for being just business, but never hints at anything more. Even more time is spent establishing the federal case against George, which, because of his ignorance-is-bliss approach, never holds much importance with the audience until the finale. And though Lisa and Matty’s occupations involve baseball, the movie shows no love for the sport, aside from the opening scenes (which include a moment when Witherspoon takes a softball to the face, only to appear in the next scene without even a bruise).

Each of the performers was placed into a role that suits their established onscreen personas; as a result, no one acts outside of their comfort zones, and therefore none of the performances are particularly surprising. Rudd plays the ultimate nice guy, void of flaws; Wilson plays a misogynistic jock; Witherspoon’s character remains in a funk until the last scene. The actors have played their respective roles before, and it’s a good thing they have natural personality, because Brooks’ script prohibits them from articulating how they feel. It actually becomes rather frustrating, watching everyone onscreen struggle with what to say, how to behave, while not knowing what they feel. Of course, we know how they feel because the movie sticks to romantic comedy formula with jealous dedication.

Dare it be said that a main problem is Nicholson, who never ceases to be ‘Jack’ when he’s onscreen. And in such brief appearances, he steals those scenes with his booming personality and in turn renders them ineffective. How could someone so comparatively plain like Rudd hope to compete when Jack shouts or grumbles or laughs in that devilishly charismatic way. Despite Brooks’ long association with the actor (he appeared in each of the Brooks titles mentioned above), someone less conspicuous would have been a better choice. But one suspects that Jack was chosen exclusively for one scene toward the end in the hospital, where his offscreen personality makes for a hilarious fakeout.

With so many characters that have no clue about what they want, getting involved in How Do You Know becomes a chore. The performances, particularly Wilson, are funny in a chuckle-worthy way, but few moments linger beyond the runtime of the movie. Brooks handles the material with respect and class, yet wastes talent like composer Hans Zimmer and cinematographer Janusz Kaminski on a plain production that offers no breakout moments or performances. It’s all very serviceable, certainly watchable, deeming an admiring shrug but certainly not the enthusiasm that followed Brooks’ early movies, nor even later efforts like Spanglish.