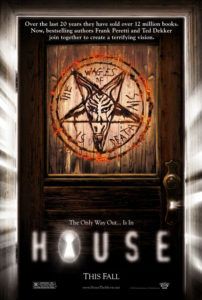 House, not to be confused with the 1986 horror-comedy of the same name, tries desperately to unite familiar horror elements that should never be combined. Taking itself quite seriously, every formulaic device from every fright film you’ve ever seen appears within one of the most unintelligible horror movies ever made. To understand what’s going on, well, there’s really no way of doing that. So you have to endure the stupidity as it unfolds, trying to grasp the filmmakers’ intentions, which, I expect even they couldn’t explain.

What’s worse, they seem to think they’re making a good movie, even a product with a “relevant” Christian message from the novel by Ted Dekker. There’s nothing worse than a film with high aspirations that fails miserably. I can’t exactly say what they were trying for, though I can tell you the result is utterly humorless and lacking any sense of comprehensibility. It’s the type of movie you watch and wonder, Didn’t they know they were making a bomb? Shouldn’t someone have stopped them, like during the script phase?

The plot feels constructed according to some demented do-it-yourself recipe: Place typical horror movie clichés into a hat. Ingredients include, but are not limited to, a family of psychotic hillbillies, Satanism, a masked serial killer, demonic spirits, black magic, friendly ghosts, haunted architecture, victims forced to kill one another, and characters realizing they were dead all along. Draw clichés in random order. Write script around young and sexy types plagued by said clichés, using them in the order in which they were drawn. Ignore audience needs.

I just described the entire film and gave away the ending. You may have missed it. I won’t bother naming actors or talking about the director per my normal review process. I don’t think they’re worth mentioning. Suffice it to say, a bunch of no-talent hacks concocted this laughably bad disaster, on the same level of mockingly awful titles as Manos: The Hands of Fate and Santa Claus Conquers the Martians. Enjoy as an unintended comedy. Berate as a chiller.

Any decathlon or Olympic training regiment pales in comparison to the physical exhaustion of making it through House. Viewers that survive this picture will suddenly discover they have the bizarre ability to endure any form of torture. No manner of cutting, starvation, boiling, denailing, castration, Chinese water torture, stretching, sleep deprivation, tooth extraction, or tickle torture could break me now, because I’ve endured this movie. Testing the mind’s resilience against a plot that laughs in the face of structure, forever remaining crazily nonsensical, the film should be shown to CIA agents to assess their resolve. No doubt most subjects would self-terminate before it’s over.

Squirming in my seat like a five-year-old watching Ingmar Bergman, frequent glances at the time preserved my sanity, knowing that, eventually, it had to end. Sarcastic mutterings whispered to the friend seated next to me lifted my frustrations as well. We weren’t the only moviegoers snickering either; the whole audience realized early on that the flick was a stinker and their chuckles were audible on occasion. Except there was no reason for them to stay. I opted to challenge my endurance for the sake of this review. What was their excuse?

Not even so-bad-it’s-good, the movie’s viewing must be restricted to private residences to allow for sardonic commentary. Playing like a feebly written Mad Lib filled-in by a script doctor with a limited vocabulary, House feels assembled at random. Most bad movies you can grasp that the filmmaker had a vision but failed. Lost amid ludicrous, ever-changing plot elements, we struggle to see where any of this film comes from, and the experience drains unless you fight back with the power of ridicule.