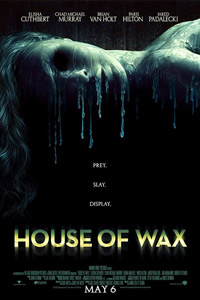 In the early 2000s, a series of remakes tapped into the wellspring of B-movies from the 1950s and 1960s. Although the original productions often featured gimmicks (3-D glasses, buzzing seats, etc.) and winking performances by Vincent Price, the newer versions offered computerized special FX, bloody violence, plenty of nudity, and grim imagery—often with the disappointing results that are typical of remakes. Among the first of them was Jan de Bont’s The Haunting (1999), a toothless and CGI-infested take on Robert Wise’s 1963 original, which was not so much spooky as a costly spectacle with a great cast. Later in the same year, Dark Castle Entertainment—a production company named after horror showman William Castle and launched by producers Robert Zemeckis, Joel Silver, and Gilbert Adler—released House on Haunted Hill, a forgettable rehash of Castle’s 1959 original about an overnight stay at a spirit-infested mansion. In 2001, Dark Castle unveiled the memorable Thir13en Ghosts, a remake of Castle’s 13 Ghosts from 1960, which features some genuinely unnerving specters. Although Dark Castle would explore original horror concepts in subsequent years with Ghost Ship (2002) and Gothika (2003), one of the company’s most memorable efforts came next. House of Wax from 2005 is a nasty remake of a remake whose imagery remains genuinely unsettling, despite its many flaws.

William Castle wasn’t involved in 1953’s House of Wax, but the movie has all the trappings of a Castle production: he often worked with its star, Vincent Price; he also commonly promoted his pictures with exhibition gimmicks, and House of Wax was among the first movies shown in 3-D. These similarities made the intellectual property ripe for remake under Dark Castle’s banner. Of course, the 1953 version was a remake of The Mystery of the Wax Museum from 1933, and all three were spawned from “The Wax Works,” a short story by Charles Belden. However, the 2005 version, written by Chad and Carey Hayes, bears little resemblance to its predecessors. Like the others, the newer version features a murderous sculptor who covers his human victims with liquid wax and puts them on display. But the movie forgoes the usual structure. The first two begin with the sculptor watching as a fire consumes his wax figures and their faces melt—imagery so nightmarish that it drives him to murder. Later, the viewer realizes the sculptor was horribly burned as well, but he wears a wax mask to conceal his freakish appearance. The 2005 version has more in common with The Texas Chain Saw Massacre (1974), where a group of twentysomethings on a road trip stumble onto the masked killer’s lair, only to become victims in his grueling process.

While The Texas Chain Saw Massacre featured Leatherface and his family of cannibals turning their victims into chow, House of Wax has twin brothers (both played by Brian Van Holt) who preserve their victims as trophies in their dead mother’s rundown attraction, called Trudy’s House of Wax. Both movies feature a hulking, masked killer with a deformed face, who works in an unkept space teeming with the evidence of countless victims. This first feature by director Jaume Collet-Serra, who has made a career out of dopey thrillers like Non-Stop (2014) and The Commuter (2018), builds considerable uneasiness given its excellent production designed by Grace Walker. The vacant small town, where much of House of Wax takes place, has an eerie emptiness. The House of Wax itself is a brilliantly conceived set-piece featuring more than just wax figures; every object inside, including the walls, is sculpted out of wax. Fortunately, the filmmakers knew to save the inevitable fire sequence for the climax, when the characters sink into the stairs and dig through walls as the house melts to the ground. The most terrifying images from any version of Belden’s story are the wax faces that droop in the fire, but here, the figures melt to reveal rotting corpses underneath. 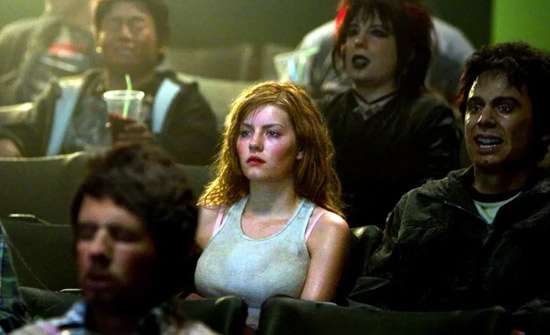 However inspired these alterations may be, the movie lacks compelling characters. Most belong to a breed of horror movie victims who cannot die soon enough, a regular characteristic of 2000s-era horror. On a trip to see a football game, a group of friends takes a detour. When the affable couple Carly (Elisha Cuthbert) and Wade (Jared Padalecki) find themselves stranded with a broken-down car, they accept a ride from a local yokel (Damon Herriman) who they meet at a roadkill pit, a festering pile where he dumps animal carcasses. It’s a distractingly bad idea to ride with him, but nonetheless, they survive the trip and investigate the nearby town, which no longer appears on maps or GPS.

The local theater advertises Whatever Happened to Baby Jane? on the marquee—its broken doll and warped sibling themes echo throughout—and the townsfolk remain indoors, seemingly wary of strangers. But soon enough, Carly and Wade find themselves in the clutches of two resident psychotics, formerly conjoined twins who have slain their entire town and replaced them with wax figures. Later, Carly and Wade’s friends return and become victims as well. Carly’s brother Nick (Chad Michael Murray), a hyper-aggressive ex-con with an attitude, transforms into a hero. The sporto Blake (Robert Ri’chard) and his dead-eyed girlfriend Paige (Paris Hilton) become body count fodder. Unfortunately, we’re forced to spend nearly half of House of Wax’s runtime in the company of these mostly unlikeable people, who test our patience with every line of dialogue.

A year before House of Wax arrived in theaters, Hilton appeared in a widely circulated sex tape that made her into something like a celebrity. The movie acknowledges this with several allusions to her character performing a striptease or fellatio, images captured by their friend Dalton (Jon Abrahams), the group’s annoying Ashton Kutcher wannabe with a digital camera and cocked trucker hat. Though Hilton’s acting is no worse than anyone else in the movie, its exploitation of her off-screen persona feels cheap and distracts from the forward momentum of the story. Had the filmmakers cut Hilton’s character from the movie, they could have saved viewers the annoyance (and about fifteen minutes of screen time). At the very least, she has one of the more memorable deaths when Vincent, the masked and deformed brother, tosses a metal pipe into her head. But her presence seemed to drive the movie’s almost universally negative critical response in 2005, aside from a few generous notices about its rather impressive ghastliness.

House of Wax remains somewhat admirable for its willingness to rethink the source material and commit to its gory presentation. Collet-Serra demonstrates his strong visual sense, and cinematographer Stephen F. Windon shoots everything in fleshy tones that enhance the gruesome overtones. Although it’s filled with stupid characters who make basic horror movie mistakes (they take the detour, accept a ride from a stranger, investigate the creepy town, etc.), it also has a way of getting under the skin. Watch the disturbing sequence when Dalton finds Wade on display in the House of Wax, albeit alive and seemingly underneath a wax shell. But no, the killer’s process merges wax and flesh, so when Dalton tries to peel away the wax, he actually removes a portion of Wade’s face, while Wade’s eyes dart about in terror and shed tears. These images, along with the impressive climax, make House of Wax worth your time. However, much of the first half, and Hilton’s presence, might ruin any hope of enjoying what comes later.