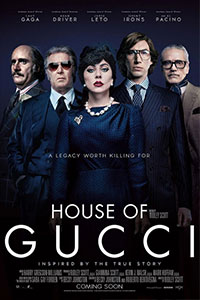 House of Gucci plays into our basest moviegoing pleasures. We like to see beautiful people rise from nothing and attain untold riches and success, but even more, we love to see the powerful lose everything. Ridley Scott’s film gives us something like a classic rags-to-riches-to-rags story. Based on Sara Gay Forden’s 2001 book The House of Gucci, the production follows attractive actors in high couture behaving badly. The real-life crimes of the rich and famous subjects—ranging from tax fraud to murder—make the material all the more histrionic. However, it’s Scott’s cast that turns the film into unabashed sensationalism. Speaking in exaggerated Italian accents, the all-star ensemble of impressive talent (Lady Gaga, Jared Leto, Al Pacino, etc.) delivers larger-than-life, wildly entertaining performances. They walk the fine line between serious drama and outright comedy, leaving us confused about how to react. Combined with a story straight out of a daytime soap opera, House of Gucci qualifies as a work of instant camp; it might also be a tragedy on an operatic scale.

Scott is no stranger to this sort of material. His films sometimes feature Gucci products and, after directing All the Money in the World (2017)—about über-wealthy oil tycoon J. Paul Getty’s icy response when his grandson was kidnapped in 1973—he’s well versed in portraying the sordid lives of the absurdly rich. Scott also has plenty of experience directing family sagas and crime epics, ranging from Gladiator (2000) to American Gangster (2007) to his underrated The Counselor (2013), usually with lengthy runtimes. With all of this in mind, House of Gucci, which clocks in at 157 minutes and features over two decades of family history, feels perfectly catered to Scott’s visual sensibilities. It is, after all, about gloriously vain people who surround themselves with expensive cars, leather handbags, dresses, shoes, suits, and jewelry. They eat fine cuisine; own houses in Milan, St. Moritz, and New York; buy priceless art on the company’s bill; and lead chaotic lives filled with infidelities, betrayals, and shady business practices.

Today, the Gucci brand means something different from its status in the 1970s, when House of Gucci begins. Then, the name was synonymous with traditional, handcrafted leather goods and high-end fashion. Although they’re not quite the Medicis, they operate out of Florence and Milan, and their reach is global. So when Patrizia Reggiani (Gaga) meets the awkward and lanky Maurizio Gucci (Adam Driver) at a party, she inserts herself into Maurizio’s life. Regardless of her gold-digging ambitions, her efforts lead to endearing falling-in-love scenes. At first, they’re a couple you want to see come together. Maurizio, shy and restrained, defies his disapproving father Rodolfo (Jeremy Irons) by planning to marry Patrizia, whose family works in “ground transportation”—code for the mafia. Once married, there’s a brief period where the newlyweds live on their own, free of Gucci intrigue or obligation, where it seems they might achieve real happiness. But, of course, it doesn’t work out that way. Soon enough, Maurizio’s uncle Aldo (Pacino) invites his nephew into the family business, and once more, Patrizia inserts herself in the situation to get what she wants: everything. 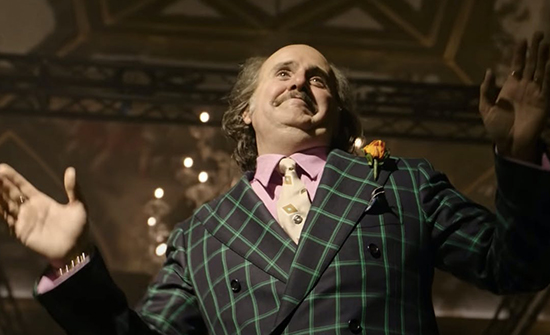 Screenwriters Becky Johnston and Roberto Bentivegna create unsubtle scenes for Gaga to do her work, walking a fine line between satire and drama. It’s a fabulous performance, full of showy line readings, face slapping, and scene-stealing. And it’s impossible to watch her interactions with Pina (Salma Hayek), a psychic Patrizia finds on late-night TV and mines for life advice, and not see them as comic asides. It’s impossible to look away from Gaga, except when Leto appears as Paolo, Aldo’s son and Maurizio’s cousin. Leto doesn’t give what one would call a good performance—not in the same way one would describe Gaga’s turn, anyway. But the usually grating actor is oddly watchable behind a fat suit, hair prosthesis, and exaggerated mannerisms. Moreover, the script treats Paolo like his father describes him: “My idiot.” (By contrast, Paolo calls Aldo, “A dinosaur posing as a butthole.”) He’s a low-rent version of Fredo from The Godfather series—pathetic, helplessly selfish, and painfully unaware of himself, endearingly so. He’s doomed to fail and betray his family, but his snobby and unkind blood relatives tend to treat him like a joke, so they’re kind of asking for it.

Leto’s performance hints that House of Gucci might be kitsch posing as something it’s not. Through his absurd, over-the-top character, we may recognize that Gaga’s performance is only slightly less cartoonish. At the same time, everyone else onscreen, with their accents no more authentically Tuscan than Olive Garden foodstuff, are caricatures to marginally lesser degrees. Doubtless, Scott didn’t mean to evoke the laughter I heard in my screening—not all of it, anyway. Paolo is undeniably a source of humor, but is Pacino’s performance meant to be funny? Are scenes played for drama meant to play like a farce? Maybe, but maybe not. In either case, some viewers couldn’t help but laugh at the craziness of it all. Others didn’t know what to think. Admittedly, I found myself somewhere in the middle, admiring the film’s garishness and bombastitude but wondering if all of it was intentional. Elsewhere, Scott’s treatment looks polished, as ever, with solid images composed by cinematographer Dariusz Wolski and coherent editing by Claire Simpson. It’s a workmanlike directing job, but I fear that Scott may have been more invested in his work on his other 2021 release, his superb The Last Duel.

Gucci celebrates its centenary this year, and Scott’s film probably isn’t the birthday present the family wanted. Some postscript before the end credits tells us that no members of the Gucci family currently operate the business. It’s gone from a respected brand to one of capitalism’s “college of corporations, inexorably determined by the immutable by-laws of business,” which Arthur Jensen mentions in Network (1975). Scott’s film charts the transition with broad strokes, giving us a view into the scandalous decline of a family empire. Unfortunately, the screenplay doesn’t have much else on its mind besides providing a vessel for some hammy performances and extravagant surfaces. On those terms, House of Gucci is easily watchable for its melodramatic trappings and ironic appeal, placing it alongside Johnny Guitar (1954) and Showgirls (1995) as a work that entertains in its alternating camp aesthetics and genuine craft.