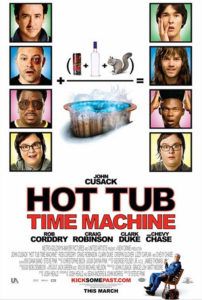 Everything you’re expecting from a comedy called Hot Tub Time Machine occurs in this movie, and then some. The story follows the formula of last year’s The Hangover, except on a larger scale. Four down-and-out friends get drunker than they should and wake up the next morning in a daze. But instead of trying to retrace their steps from the night before, they try to retrace a night that would determine the next twenty years of their lives—all via the device of a malfunctioning hot tub that doubles as a time machine… Nevermind how that sounds. Just go with it.

The self-absorbed Adam (John Cusack), the unhappily married Nick (Craig Robinson), the over-stimulated and suicidal Lou (Rob Corddry), and Adam’s gamer nephew Jacob (Clark Duke) spend a nostalgic evening partying in a ski lodge that was a teenage party spot for the elder three. When they wake up, they’re culture-shocked in 1986 during the town’s ‘Winterfest’ on a day when each of their lives was changed, seemingly transported there by the hot tub. They each look like the teenage versions of themselves, although we see them as the above-mentioned actors because they’re the recognizable ones on the poster. These four leads are a likable bunch, although Cusack, whose friend Steve Pink (writer of Grosse Pointe Blank) directed the film, seems too good for the material.

Meanwhile, the brainy Jacob, who flickers in and out because his existence is threatened if the timeline changes, has written enough Stargate fan fiction to know that if they change even the smallest detail in the past, the future could be considerably altered. So they try to do everything the same as they did it twenty years ago. Trouble is, none of them are particularly happy with the way things worked out in their lives. One by one, they each resolve to do things differently for their own benefit, while also trying to make their cut-off for the return home. Offering vague instructions on how they can return to their correct time is the hot tub’s repairman, played by Chevy Chase. Akin to Don Knotts in Pleasantville or Christopher Walken in Click, the wisecracking guide funnels the characters to a midnight deadline that they predictably just barely make.

But these aren’t responsible time travelers—it’s their manipulation of the past where the movie becomes really funny. Imagine if you knew the future. How would you exploit it? Being that our heroes are party animals, they choose to place bets on sporting events to which they know the outcome, not to mention score with loose ‘80s girls. The movie’s version of the ‘80s is very much like a movie version of the ‘80s, complete with bullying jocks as the ski patrol. But because the foursome was transported back through time, they’ve changed things to the degree that they aren’t able to take advantage of the situation as much as they’d like. Indeed, this movie might be remembered for changing “The Butterfly Effect” to “The Puke-Covered Squirrel Effect”. Only time will tell.

There’s also a hilarious subplot involving a bitter, one-armed bellhop (played Back to the Future alum Crispin Glover). In the past, he has both arms. To be sure, you’ll find out how he lost his arm in the past, but when? There’s a number of setups in which our heroes watch in anticipation and fear as Glover’s valet comes impossibly close to losing that arm, but doesn’t. Will it be during the chainsaw toss, a horrible car accident, or some other debacle? Here are some other questions you may have when it’s all over: From what hole did they dig up Crispin Glover? Why did the filmmakers limit themselves to just one journey through time? Why not place the hot tub in prehistoric times or during the Civil War, just to mix up the scenery? Why was Chevy Chase’s character so curiously undeveloped?  When the guys return to the present and the timeline has changed for the better, won’t they regret missing out on all of the pleasant, alternate experiences between 1986 and now? Won’t their alternate timeline families realize they’re not the same person anymore?

The science of Hot Tub Time Machine is just as sophisticated as you’d expect with that title. The movie has more by way of gross-out humor, blatant homophobia, and clever time travel jokes than any sense of logic about its central device. But that’s the point. So maybe just don’t think about how stupid it all is. This is absurdist stuff on the level of Harold and Kumar Go to White Castle, except not quite as satisfyingly over-the-top. When the characters reflect on their lives in the end, that’s where the momentum slows, the movie stops being just stupid, and the audience loses interest. That’s what happens when an audience doesn’t care about the characters but thinks their antics are funny. The result is the kind of lazy comedy that demands a lazy audience. If you’re feeling lazy, you could do worse.