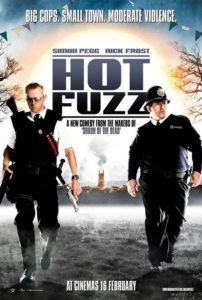 Widely described as a “spoof” of zombie movies, the fantastic 2004 film Shaun of the Dead was the feature debut of British writer-director team Simon Pegg and Edgar Wright. But the word “spoof” brings with it imprecise associations to drivel like Scary Movie or even Airplane!, whereas Shaun of the Dead contained an actual narrative populated by characters whose fates concerned us and whose relationships we cared about—all while cleverly referencing zombie classics such as George A. Romero’s Dawn of the Dead and Sam Raimi’s The Evil Dead. And just like their first collaboration, their second film together, called Hot Fuzz, pays tribute to a particular genre, in this case buddy cop films like Bad Boys (then again, Bad Boys II is more accurate) and Point Break. As with their first effort, their second is a hilarious comedy filled with directorial bravado and involving action, but it’s the central relationship between characters played by Simon Pegg and Nick Frost that binds us to the material.

Hotshot policeman—ahem—police officer Nick Angel (Pegg) works for the London police and has an arrest record four-hundred percent higher than his fellow officers, which understandably makes them look bad. His bosses (cameo by Brit talents Martin Freeman, Steve Coogan, and Bill Nighy), tired of Angel’s over-achievements, promote him to Sergeant and transfer him to Sandford, a quiet pastoral town. Sanford’s greatest concern resides in a golden “living statue” performer appearing randomly throughout the village and a pack of loiterers wearing hoodies. With no choice but to go, Angel’s expert ability to fight crime is wasted on catching loose swans and pegging underage drinkers at the local pub. His first night in town, Angel arrests his new partner Danny Butterman (Nick Frost) for drunk driving, but since Danny’s father is the local department’s Chief Inspector (Jim Broadbent), Danny sleeps it off in a cell and wakes up to cake. Danny’s dad explains, “The cake is punishment for using his helmet as a urinal last week. No, last night’s antics will require something a little more serious”—which turns out to be a month’s worth of Chunky Monkey ice cream.

Obsessed with police action movies, Danny follows the experienced Angel like a puppy, urging him for war stories from London. Angel teaches Danny to keep his eyes open, to always be on duty; that comes in handy later when Angel begins to suspect a series of freak accidents in the quiet town of Sandford are actually murders. His suspicion is further fuelled by the townspeople’s strange willingness to overlook the accidents if only to preserve Sandford’s status as the most pleasant town in Britain. Meanwhile, Danny introduces Angel to the aforementioned action movies, foreshadowing the over-the-top, cliché cop violence to follow in Hot Fuzz, both caricatured and embraced to wildly fun extremes. Just as Shaun of the Dead combined humor with authentically scary situations, the action scenes in the third act are indisputably entertaining.

Normally cringe-inducing routines where a hero slow-motion jumps to one side while firing off a pistol in each hand, although in John Woo movies would be redundant and laughable (in a bad way), here enhance the scene’s deliberate awe-inspiring intent. The film’s characters—some commonplace action movie types, some pull straight out of a quaint Miss Marple story—outweigh their designation as stereotypes through strong performances and writing. Timothy Dalton plays a smarmy grocery store manager named Skinner that creepily (and somehow charmingly) delivers a line to a woman about bashing her head in; while taken as good humor by the woman, Angel raises an eyebrow. The foolish and inexperienced police force of Sandford doesn’t believe Angel when he tries to convince them murder has struck their town, even though there have been two decapitations and a house exploded. “Everything’s murder with you” they claim, much to our frustration and delight.

Wright’s direction easily forms to action movie archetypes with his signature quick-and-fierce editing style, appropriately on overdrive thanks to editor Chris Dickens. The action is not unlike the excessively segmented films of Michael Bay, except each shot and sequence is connected and planned out, leading one image into the next with masterful orchestration. This style of Wright’s was explored before on Spaced and Shaun of the Dead, but it truly blossoms into something bravado here. Nevertheless, humor remains the picture’s center, from movie references to its cameos by famous Brits: Who would’ve thought a reference to Straw Dogs could ever incite an outburst of laughter, but Wright pulled it off. And keep your eyes open, as Cate Blanchett “appears” as Angel’s ex-girlfriend and director Peter Jackson shows up as a stab-happy Santa Claus. Even audiences wary of pointedly British humor will enjoy the refreshing mix of subtle, physical, and intellectual comedy, suitable for any (adult) audience. (The R-rating is deserved for blood and gore.)

Pegg and Frost together again, this time in buddy cop roles, compliment each other as wonderfully as they did in Shaun of the Dead. Each character has depth and gradations of humanity, further setting Hot Fuzz apart from “spoof” movies and elevating it to the realm of pure filmmaking. We never feel that its winking-at-the-audience sensibility outshines the story or action. Indeed, you’ll quickly realize from the opening scenes and right to the very end that you’re absorbed in the murder-mystery plot and action scenes; even though the film is satirical, it remains completely involving. On par with their zombie predecessor, Wright’s Hot Fuzz deserves more than to be called a “spoof”, as its cinematic rhetoric speaks to audiences without relying on cheeky parody movie trash. This is great filmmaking and storytelling that just so happens to allude to other action movies in its construction. And quite frankly, it’s greatly entertaining in both the comedic and action realms, far surpassing its referenced sources.