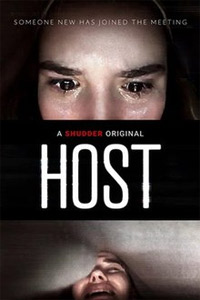 In Host, co-writer and director Rob Savage delivers a blend of subgenres, combining the found footage movie with desktop horror, albeit crafted for our current pandemic eternity. The setting is cloyingly familiar for many of us: a free Zoom call with an abbreviated time limit. This means that, when several friends meet online for a remote séance, their call will end in short order. Mercifully, the movie, streaming exclusively on Shudder, runs a mere 56 minutes and, arguably, doesn’t even qualify as a feature. But it’s just the right amount of time for this sort of thing. Usually, found footage and desktop horror movies stretch the limits of their story to approach the 90-minute standard. Shot remotely in the UK while under quarantine due to COVID-19, Host shows how filmmakers can create something inspired even under strict limitations. It’s impressive as a technical accomplishment that was written, shot, and released within a span of a few short months during lockdown, and it supplies a few effective scares as well.

The story takes place entirely on the desktop of Haley (Haley Bishop), who reaches out to several BFFs, along with Scottish medium Seylan (Seylan Baxter), to make contact with the dead. But Haley and Seylan might be the only ones taking the proceedings seriously. If a ritual conjuring in person is enough to alert the old bullshit meter, imagine what a session online does to a skeptic’s inhibitions. While Seylan asks that her participants ignite a candle as a “guiding light” for spirits, and that they visualize a protective circle, it all seems rather absurd. Their guide encourages them to hold imaginary hands because they are separated and communicating from a vast distance, which means they’re “slightly less protected” than normal. It’s all the more important that they take it seriously, which, of course, not all of them do. The chief offenders are Teddy (Edward Linard), a vaping hipster with a manbun who invents a funny drinking game that requires a shot every time Seylan mentions the “astral plane,” whereas the can’t-take-anything-seriously Jemma (Jemma Moore) has something crueler up her sleeve.

Within a few moments, the participants have thoroughly tempted some paranormal entity into our realm, leading to a series of familiar preludes to terror. And when the characters explore things that go bump in the night—in dark hallways, badly lit rooms, and even the dreaded attic—they awkwardly lug along their laptop in service of the movie, while their friends watch in fear of the inevitable jump-scare. Soon enough, creepy sounds and mysterious lights escalate into phantom hands pulling characters across the room or causing someone to disappear entirely. It’s all standard stuff until one horrific image causes our heart to miss a beat: Emma (Emma Louise Webb), who plays around with face filters early on, sees a disembodied face floating in the living room. It looks vaguely like the transparent Chevy Chase from Memoirs of an Invisible Man (1993), after his character tries to apply make-up, or a transparent Halloween mask. The face is a hollow-eyed sheath hovering in the air. Suddenly we realize Emma’s face filter has recognized something there. She reaches out to touch it, and it sharply turns toward her. The moment is breathless.

The script by Savage and co-writers Gemma Hurley and Jed Shepherd has plenty in common with other desktop horror movies, Unfriended (2015) above all. What makes Host superior is that it explores the concept of a haunted Zoom call to its fullest. Things jump out from custom backgrounds, participants drop out, and the stationary nature of each webcam view within the frame implants fear about what we’re not seeing. VFX supervisor Steve Bray uses computer-generated imagery sparingly to render the occasional spooky image, whereas the stunts by Lucky 13 Action (who wore hazmat suits inside the actors’ homes to coordinate) deliver some jarring physical performances—including some impressive “How did they do that?” moments, which are all the scarier because they’re convincing. It’s important to remember that, after all, each performer shot during the full lockdown toward the beginning of the initial outbreak. Their webcams peer into their homes, making for the occasional hint of naturalism. One of the best moments is when Haley sneezes, which was apparently unscripted based on the bemused expressions of her fellow actors in a tense moment in the story. Another character also has a bat in the cave, reminding viewers of the movie’s unpolished appeal.

Although it’s tempting to interpret Host as a metaphor for our times—perhaps it’s about the ghosts that now inhabit the spaces between us, those of us who have stopped attending family functions and crowded parties, anyway—it’s more likely that Savage and company saw an opportunity to make a good exploitation flick during the quarantine. On those modest ambitions, it preys on our fear of isolation in a way that feels incomparable to any other horror movie right now. Host may go down as a rare anthropological document of what life was like for a relatively brief (and also excruciatingly long) period of time. The characters prove one-note, just distinct enough to feel genuine, while the genre elements, complete with talk about not disrespecting spirits, remain rather thin and mythos-free compared to other paranormal thrillers of this ilk. But Host amounts to a memorable hour that, once we’re released from self-containment, may begin to look even scarier upon reflection.