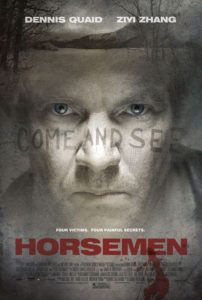 Horsemen is a movie about gruesome murder scenes, troubled youths, and detective clichés. Here we have another disheveled, disenchanted investigator whose personal problems blend into his current case, and in the end, the two resolve each other in the same disturbing moment. Dennis Quaid plays Aidan Breslin, a widower left with two children: Sean (Liam James) is young and innocent, whereas the not-so-innocent teenager Alex (Lou Taylor Pucci, from Thumbsucker) has become frustrated with his father’s growing aloofness. Aidan’s idea of parenting is leaving $20 on the kitchen table for food, so Alex has had to pick up the pieces in their family.

Their mutual coldness is reflected in the snowy backdrop of a Chicago winter. Specializing in “forensic odontology,” Aidan’s field seems more like a CSI offshoot designed specifically for a niche market of dentists. It comes in handy, though, when someone puts a pile of human teeth on a serving plate in the middle of a frozen lake. The serial killer writes “Come and See” around the various crime scenes, creating gristly presentations where victims are suspended on metal riggings with wire and large fishing hooks. Needless to say, the movie isn’t for the squeamish.

When one victim’s adopted daughter, Kristen (Ziyi Zhang), confesses to her mother’s murder, an interrogation room cat-and-mouse game begins between she and Aidan that’s embarrassingly unsuccessful. Zhang overacts in these scenes, giving her best wacko portrayal, while Quaid just looks at her blankly. If there was supposed to be a connection between the two, some dramatic dynamic, it isn’t communicated in the dialogue or the acting. We see only that she takes herself way too seriously, and Aidan doesn’t seem to care. Meanwhile, more murders are taking place, so why are we wasting time talking to this fruitcake?

What might surprise you is that Michael Bay produced this thing, and yet there are no explosions or deafening special effects, no over-the-top antics at all, except perhaps Zhang’s acting. This must be the same Bay ego (Does he have many, or just one big one?) that produced the Friday the 13th and The Texas Chainsaw Massacre remakes. Stranger, more uncharacteristic producer credits have occurred (after all, Blazing Saddles and Spaceballs director Mel Brooks produced The Fly and The Elephant Man). That Bay has chosen to express himself through a combination of asteroids hurtling towards earth, massive robot battles, and extreme serial killers is an unhealthy and concerning combo.

Anyway, following very closely in the vein of Se7en, the film’s whodunit scenario contains bloody killings inspired by Christian imagery, all leading to a countdown of sorts. Aidan deduces that there are four killers, each taking their distinctiveness from The Four Horsemen of the Apocalypse, of Revelations fame. But the countdown here isn’t firmly established—it’s not even mentioned until the third act. Supposedly, once each one of the “horsemen killers” claims a life, the apocalypse will come, meaning “the veil will be lifted,” and according to Kristen a revolution will begin. What revolution, and who is involved? When the answers determine that Horsemen is little more than a platform for teens to express their adolescent angst, it becomes eye-rollingly stupid instead of meaningful, and boasts probably the silliest twist ending you could imagine, leaving the audience not only disappointed but sort of angry.

Best known for his druggie flick Spun and plenty of music videos, director Jonas Åkerlund takes his time letting the story unfold, which only adds to the potency of disappointment. Worse than a movie that’s terrible from the get-go, a thriller that disappoints only in the final moments offers a greater plunge for the viewer. Throughout the first hour, we become emotionally invested in our lead detective trying to solve the case and simultaneously mend his broken family. Quaid is great at drawing our sympathy. But in the end, the problems are wrapped up into an absurd finale that doesn’t have an appropriate foundation.

The story feels whittled down by an editor desperate to create suspense, rather than the drama Åkerlund and writer Dave Callaham wanted to make. About twenty minutes were cut from the International Release of this film; perhaps they contained whatever narrative glue was needed to make this a cohesive drama. But alas, the movie remains a contrived serial killer yarn unraveling with occasional emotional flourishes too thin to have value. This unresolved tension between genres ultimately defeats any hope for effective storytelling.