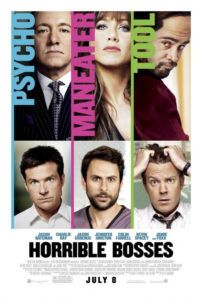 Horrible Bosses comes close to being a very good black comedy. It has an instantly hilarious premise about three working stiffs so fed up with their soulless employers that they decide to kill them, provides half the draw, while an impressive ensemble cast provides the other. But then, director Seth Gordon and his three credited screenwriters (Michael Markowitz, Jonathan Goldstein, and John Francis Daley) refuse to allow their protagonists to live-out their daydreaming murder fantasies. Without the confidence or daring to truly embrace its macabre setup, this amusing-yet-dimwitted movie proves to be lighthearted and, even worse, rather pleasant from a moral standpoint. For viewers looking for much-needed escape from these scary times for both the unemployed and working, the movie barely makes up for what it lacks in murder-your-boss catharsis with generalized laughs.

As middle management in a nonspecific financial company, Nick (a wonderfully dry Jason Bateman) loses out on a long-promised promotion when his self-serving supervisor, David (Kevin Spacey), decides to promote himself instead. Kurt (Jason Sudeikis) actually loves his job and his genial employer Jack (Donald Sutherland). But when Jack dies suddenly, Kurt’s new boss becomes Jack’s cocaine-snorting son, Bobby (Colin Farrell, whose scenes hardly go beyond what we’ve seen in the trailer), who is determined to bleed the company dry to support his taste for drugs and hookers. And Dale (Charlie Day) works as an assistant for a nymphomaniacal dentist, Julia (Jennifer Aniston), whose nutso sexual harassment has developed into full-fledged sexual blackmail (“sleep with me or else…”). The others complain that Dale’s problem isn’t as bad, that they might actually enjoy being harassed by an attractive female employer, except that Dale is engaged to be married (to an underwritten fiancée character) and wants to remain faithful.

When together they resolve their bosses need to go bye-bye, the three friends muddle their way through finding a hit-man, but instead find a “murder consultant” (Jamie Foxx, playing another underwritten role) who tells them to swap victims Strangers on a Train-style to avoid being linked to their eventual crimes by motive. And so, the boys recon the homes of each others’ bosses, making obvious mistakes along the way. Any idiot who has watched a dull Hollywood murder mystery or CSI television show would do better than these guys. As Kurt sticks Bobby’s toothbrush up his butt and the other two cleaned up spilled cocaine with a dust buster, it becomes apparent that their scheme is more about childish revenge than actual murder, and that none of these three stooges are capable of following through. Much goes wrong, the would-be murderers panic, bad decisions are made, and by the time the police get involved, it all comes to a very “wacky” if underwhelming conclusion.

Many of the movie’s varied laughs come from Aniston’s turn as the porn-tongued dentist, a clear and intentional departure from her roster of bland performances in even blander rom-coms. Her role exists for pure shock value on and offscreen and her gamble works, while Day’s boyish-yet-shrill reactions offer a perfect balance. In fact, Day carries much of the movie with his enthusiastic performance, all the more exaggerated when placed next to Bateman’s deadpan and Sudeikis’ chummy middle-ground “dude”. Had Sudeikis’ Kurt (a role not unlike his man-whore from Hall Pass) been in Julia’s employ, this would be a different movie entirely. As for Spacey’s cruel, eventually monstrous (and accurate) portrayal of financial services management, it’s not too far from his turn in Swimming With Sharks, although that film develops the same role beyond one-note wickedness, unlike here.

Each of the main characters is coupled with a boss designed to exploit their particular weakness. But even while they never take the movie into blacker territory, the three guys also never learn to stand up for themselves in the workplace (at least, not in a socially acceptable manner). In the end, Horrible Bosses doesn’t address a realistic or macabre solution and takes neither the high ground nor the low. Audiences looking for a black comedy may be disappointed because of this and uptight moralists may get somewhat aggravated. And though there are plenty of laughs throughout—enough for an unenthusiastic endorsement, anyway—no one will be offended when it’s over. But shouldn’t a wannabe wicked movie about employees who decide to kill their bosses offend someone? (That is, besides your own horrible boss, whose opinion shouldn’t matter here anyway.) The majority of summer comedy audiences will walk away pleased, having laughed a lot, but those of us looking for something different will have to keep looking.