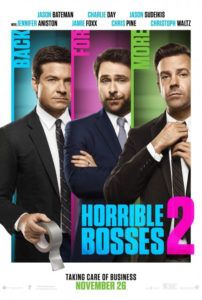 Hollywood comedies of late depend on a frustrating, transparent method of production that is swiftly losing its charm. Step 1: Get a bunch of funny people together whose faces are recognizable and will look good on a poster. Step 2: Write up a basic scenario, complete with scenes that will resemble a plot when strung together. Step 3: Get said funny people in front of the camera, explain what should happen in their scene, and then let them do their thing off-script. Step 4: Piece together the chaos in the editing room. Step 5: Advertise the hell out of your product, and therein, no matter what the result, it becomes an almost guaranteed profit-maker. Step 6: Laugh all the way to the bank because, despite what critics and perhaps even audiences say, your lousy product just made a boatload of money.

Horrible Bosses 2 follows this method to the letter. And while its implementation of Steps 1, 2, and 4-6 are all standard for recent Hollywood comedies (prime example: 22 Jump Street), this particular one stumbles on Step 3. Chief castmembers Jason Bateman, Charlie Day, and Jason Sudeikis headline the proceedings, and they’re expected to improvise their way through scenes that go nowhere. Bateman offers his usual deadpan routine, but Day and Sudeikis play the yammering numbskulls who talk over each other at every possible moment. Meanwhile, into the fray are supporting players Christoph Waltz, Chris Pine, Jennifer Aniston, Kevin Spacey, and Jamie Foxx. These top-tier actors are forced to endure hell as the improv threesome does their thing, and it’s nothing short of embarrassingly unfunny.

To fulfill my critical obligation to discuss the plot in each review, here’s a brief synopsis: Nick (Bateman), Kurt (Sudeikis), and Dale (Day) are back again, and they’ve started their own company with an invention that catches the eye of young, wealthy investor Rex (Chris Pine) and his ruthless businessman father (Christoph Waltz). When dad cancels the deal and plans to seize control of their company, the trio plots to kidnap Rex for ransom. After a failed kidnapping attempt, Rex learns of their scheme; he agrees to go along with the kidnapping as their “inside man” and help them steal from his dad. Plenty of double-crosses and switcheroos happen along the way. Foxx returns as “Motherfucker” Jones and offers his criminal advice to the boys. Aniston returns as Dale’s former boss, a nymphomaniac dentist with a dirty mind (and mouth).

From start to finish, the viewer is overcome with an overwhelming sense of annoyance, primarily toward Day and Sudeikis. Whenever director Sean Anders gets his supporting actors in front of the camera opposite these two performers, Day and Sudeikis drown out all else with their endless babbling, arguing, and talking over one another. They are obnoxious, sex-obsessed, irredeemably stupid characters who propel a wide range of misunderstandings that are supposed to be funny but, as you might have suspected by now, are not funny at all. And their endless chatter grows so tiresome that you shift in your seat in frustration, irritated beyond all hope for tolerance. Anders and his co-writer John Morris constantly remind us that Kurt is horny and Dale is nervous and dim-witted. They’re each one-note characters and one-joke comedians. Then again, these filmmakers never heard a joke they wanted to tell only once.

Horrible Bosses 2 exists only because Horrible Bosses made some money, and Warner Bros. couldn’t resist the temptation of a no-risk sequel. The 2011 original had a funny concept and a half-hearted follow-through, but this sequel proves to be such a poor excuse for humor. Whether written or improvised in a series of forcibly off-the-cuff scenes, the jokes are rooted in cheap, juvenile, and abrasive humor that consists of predictable shocks and over-the-top situations. And as patrons begin to leave the theater before it’s over (or later, on home video, shut off their televisions), you can hardly blame them. A crowded but silent theater in a comedy is painful to endure and difficult to achieve, but Horrible Bosses 2 manages it. Indeed, if you laugh once during the 108-minute runtime, that will have been more than this critic. And for those who left early during my screening, I can only envy them.