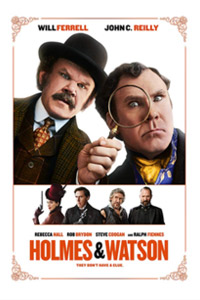 Out of some morbid curiosity, and perhaps a self-destructive streak, I decided to watch the much-hated Holmes & Watson starring Will Ferrell and John C. Reilly. Although many adore the abrasive charms of Talladega Nights (2006) and Step Brothers (2008), these movies have never appealed to me, often outstaying their welcome around the twenty-minute mark. My decision to screen their the latest comedy, which bombed during last year’s holiday season, was less about genuine interest than peer pressure. “It’s so bad,” a number of people have told me. “You have to see it.” Putting it on largely as background noise, I instantly regretted the decision. Holmes & Watson is frustratingly stupid within the first seconds (it opens with a quote from Hannah Montana) and continues for a painfully long, utterly laughless 90 minutes.

In the movie, Ferrell and Reilly reduce two of literature’s most celebrated, intelligent characters to bungling idiots. Performed with vaguely effeminate mannerisms that should come across as an insult to the British, Holmes (Ferrell) and Watson (Reilly) investigate, sort of, a mystery to which the details are instantly foggy—honestly, as I write this, I just watched the movie and couldn’t tell you what it’s about. I can tell you it’s set in London during the early 1900s, and the production’s costumes, hair and makeup, and interiors look professional. The cast is also amazing; it boasts several excellent, but absolutely wasted UK performers (Ralph Fiennes, Hugh Laurie, Kelly Macdonald, Steve Coogan, Rob Brydon).

The largely reference-based humor is dated, to the point where you wonder if the joke is so meta that it’s less about the reference itself than a self-aware gag about the dated quality of the reference. An absurd morgue scene riffs on the Patrick Swayze/Demi Moore’s pottery scene in Ghost (1990); the ending features Billy Zane reprising his role from Titanic (1997); and several sequences lampoon those moments from Sherlock Holmes and its 2011 sequel, when Robert Downey Jr. anticipated a series of moves that would incapacitate his enemy.

Elsewhere, the movie’s attempts at randomness fall flat. Jokes about Holmes’ intelligence giving him psychic powers do not pair well with his inability to choose a style of hat, a thread that often leaves him looking like a pimp stereotype. An out-of-left-field musical number ushers in the third act, while the modern hip-hop music courtesy of Mark Mothersbaugh desperately wants you to know it’s out of place. And the whole time, you’ll be wondering why any of this exists.

The entire thing is embarrassing and difficult to endure. Despite the short runtime, I stopped the movie more than once to take a break; however, I resisted giving up on it completely, if only because I didn’t want to waste the $5 rental charge. I can only be thankful that I didn’t venture into the theater, as I would have been forced to endure the full 90 minutes in a single sitting, which would have been something akin to self-imposed waterboarding. Truly, the only laughs to be had are those of disbelief at just how awful this experience is.