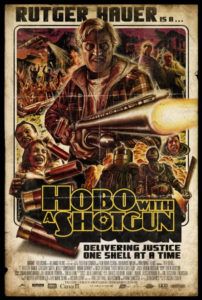 Hobo with a Shotgun is the second fake Grindhouse trailer to become a full-length feature, after Robert Rodriguez’s Machete from last year. During the marketing rush for Rodriguez and Quentin Tarantino’s splendid double-feature from 2007, there was a promotional contest where participants filmed and submitted their own homemade schlock trailers. Though director Jason Eisener’s winning short, also called Hobo with a Shotgun, didn’t earn itself wide distribution with their films as promised, it made theaters on a few prints and gathered plenty of internet buzz. Eisener’s second effort, the Christmas-themed horror short Treevenge, which appeared at Sundance, further signaled the young filmmaker’s talent and earned him the chance to direct a feature based on his contest winner.

Like Troma Entertainment trash on methamphetamines, the result is what you’d expect from a movie inspired by Surf Nazis Must Die and The Toxic Avenger, but made with enough genre knowhow to be even more over-the-top than its sources of inspiration. It operates on a level of overstimulation that will test an audience’s resolve, although I suspect that hardcore, gore-hungry horror fans will eat this stuff up like a zombie on fresh brains. Shot in Nova Scotia with a shoestring budget, the movie was picked up by Magnet for a limited theatrical release and a heavy push on video-on-demand markets. Indeed, this one belongs in a novelty market, to be enjoyed with small cheering crowds of moviegoers drunk on cheap beer and versed in Troma fare.

Eisener’s grossout intentions reach ridiculous heights within the first scenes. A nameless hobo played by Rutger Hauer arrives in Hope Town by railcar, only to find the city overrun by urban frenzy. He watches with disgust as a crimelord called The Drake (Brian Downey) and his two Tom Cruise-wannabe sons Slick (Gregory Smith) and Ivan (Nick Bateman) propel psychotic violence in the streets. Their behavior achieves a cartoonish degree of absurdity mixed with a yuck-factor to challenge Peter Jackson’s Dead Alive, whereas Hauer’s performance comes with a cold seriousness—that is, until his wandering homeless man decides to fight bloody atrocity with a pump-action shotgun. Once he’s armed, Hauer becomes a crazed madman blowing away the demented hoodlums of Hope Town one bullet at a time.

From the acting to the production design, the heightened presentation will test viewers, even those versed in exploitation films of this sort. Visually, Eisener’s dedication to an intentionally cheap-looking retro production earns him points; overexposed colors are tuned-up to look like a lousy video transfer intended for “USA Up All Night”. And while recent grindhouse-inspired mainstream schlock like Machete has proven uneven, this production maintains its dedication to 1980s B-movie production value quite well. It’s the acting and story that becomes grating. Downey, Smith, and Bateman don’t know the meaning of six-inch voices—they shout every line, as if center stage in a Rob Zombie movie. Even muted, this movie could be loud and obnoxious, and certainly too extreme for general audiences.

Then again, if mentions of Troma and “Up All Night” have you clapping to yourself with excitement, then here’s a movie for you—one whose definition of a good time involves gallons of fake blood and no limit of offensive material. You already know whether or not you’ll like this movie, because viewers either love this stuff or detest it. As a critic, I can see both sides. This smorgasbord of decapitations, chunky gore, and all around excessiveness has an established audience that will adore it. Hobo with a Shot does what it does well, but its demographic is so limited to cult movie enthusiasts that it’s impossible to recommend to the general moviegoer. Call it provisional approval based on your tolerance of filth and punishing sadism. Everyone not applicable should keep a safe distance.Rutger Hauer, Brian Downey, Molly Dunsworth, and Robb Wells